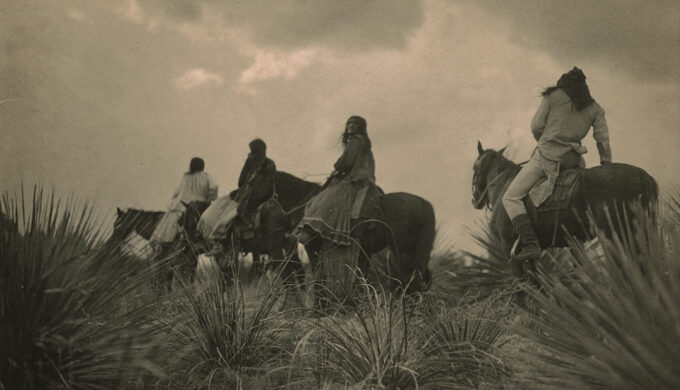 Changeling destiny—an injured Apache girl adopted by a powerful rancher, the rancher’s son kidnapped in revenge by the last free Apaches. Inspired by real people and real events, Far Blue Mountains is the new western novel being hailed as an instant classic. Fans of Lonesome Dove and Yellowstone will want to clear a space on their bookshelves.

In the Sierra Madre of 1926, rancher Jubal McKenna discovers an injured Apache girl and welcomes her into his family. In doing so, he sets in motion an irrevocable exchange of destiny. The girl is a member of the last unsurrendered Apaches. Readers will be surprised to discover the history of the Apaches who refused to lay down their guns with Geronimo, instead taking refuge in the rugged Sierra Madre, where they dwelled into the 1930s. In the wild mountains of Mexico, the Apaches keep the old ways. An eye for an eye, blood for blood—in reprisal, the Apaches kidnap Jubal’s young son, John Russell McKenna.

The Apaches take the boy into the sierras to live as one of their own, a beloved captive. The boy is immersed in Apache culture, a world of freedom and adventure, brutal violence and strange magic. John Russell becomes Denali, an Apache warrior. Meanwhile Jubal searches the sierras for Apache camps, as the quest for revenge threatens to consume his soul.

Get your copy here!

This magnificent first novel by Max McNabb has all the relentless pace of a classic western and the elegiac beauty of a lost myth. Readers are greeting Far Blue Mountains with an urgency to each turn of the page. A grand western with all the sweeping majesty of a VistaVision, Technicolor epic, the propulsive story is told in surgically-precise prose. Each sentence is an aesthetic experience.

Max McNabb’s prose is suffused with landscape. The breathtaking expanses of the Sierra Madre are fully realized in his measured cadences. McNabb writes of characters who live their rough-hewn lives in unconscious transaction with the land. He writes of a place where the wilderness of man’s heart merges with another wilderness, somewhere between the barrancas and snow-capped peaks, the canyons and distant chains of far blue mountains.

The influence of many great writers can be felt in McNabb’s prose—Cormac McCarthy, James Ellroy, Elmore Leonard, and Larry Brown are just a few who spring to mind. Yet the singular vision at the heart of Far Blue Mountains is entirely McNabb’s own, the first offering of a bold young talent who has emerged onto the literary landscape from the empty reaches of West Texas. Max McNabb is from Lubbock, Texas. The McNabb family are long-time Texas farmers and cotton ginners. Though the comic Norm Macdonald once jokingly referred to McNabb as a “lonesome drifter,” he still lives on the family farm a few miles outside of Ropesville.

Far Blue Mountains is the first novel in the Beloved Captive Trilogy, and McNabb has already completed all three volumes. Each successive novel will be released over the course of the next few months, with the entire trilogy published in a year’s time.

Max McNabb can be booked for speaking engagements in which he offers a riveting presentation of the historical facts behind his novel. Audiences will be deeply fascinated by the true story, paired with actual photos of the real people involved. McNabb can be booked at this link. Check out his website here, and follow McNabb on Facebook.

Get your copy of Far Blue Mountains here!