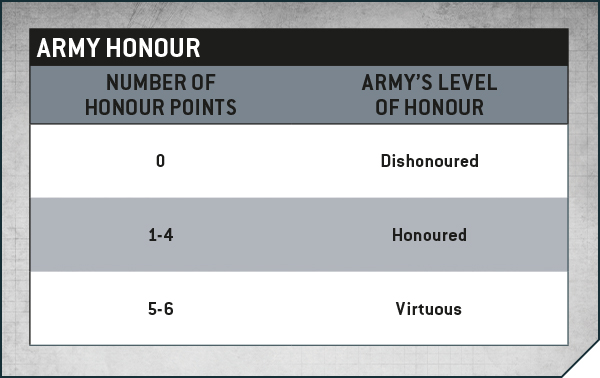 New leaks from Warhammer-Community have arrived and it’s all about Imperial Knights. Showcasing new rules to help bolster their effectiveness on the battlefield via honoured and virtuous abilities.

Granting benefits such as gaining Objective Secured or counting as more models if you already have that trait, gaining re-rolls to charges and advances, or even adding +1 to hit!

The granted abilities come at a cost of gaining honour points throughout the course of the battle by completing oaths that can range from holding more objectives than your opponent to out killing your enemy units. There is a detriment though, failure to fulfill your oath can cost you honour points giving the advantage back to your enemy!

In the game, the Imperial Knights have been on the back foot for a while, not seeing a ton of competitive play at the highest levels but these changes might put the ball back in their court with the ability to not only hold objectives but take them by force.

It will be interesting to see what stratagems the new book will lend. We would love to see an auto advance 6”, to help the smaller armigers and warglaives get across the field faster to set up flanking maneuvers and control midfield objectives.

Gaining attributes such as +1 to hit or wound is a massive probability bump when your attacks are low in count but high in damage. When you only have 4 attacks base, +1 to hit is a huge uptick in value when those attacks can be upwards of 6 damage each!

There is a ton to look forward to from their upcoming book and I foresee these changes and additions really help push the knights in competitive direction for players of any skill level to pick up and use.

Building on a budget? Imperial Knights are extremely budget friendly due to the low model count and high impact they have on the field, so look to this codex drop for a slightly more inexpensive army to put onto the battlefield.