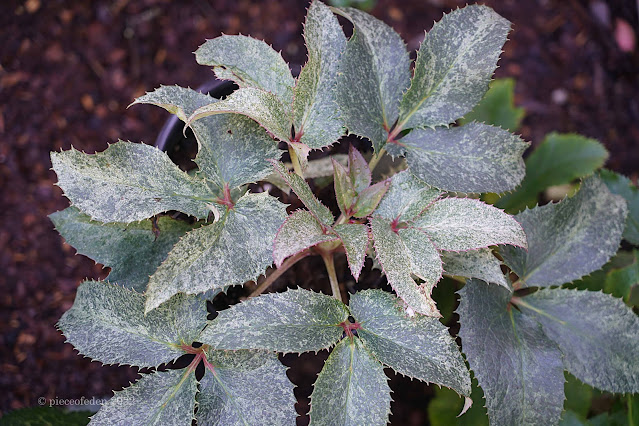 One thing I was looking for was Hellebores, and surprisingly, I could not find any.

Time to get the planters ready for spring.  They were looking a bit shabby 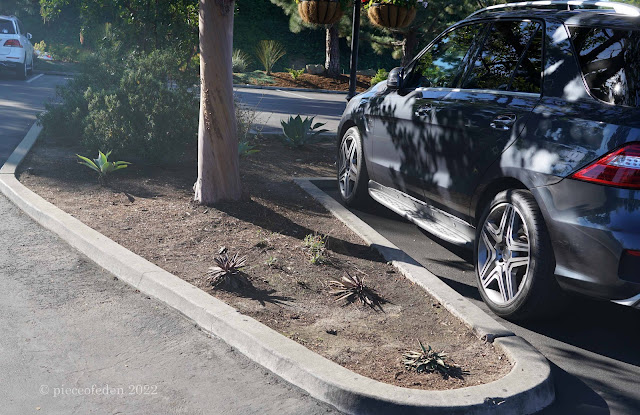 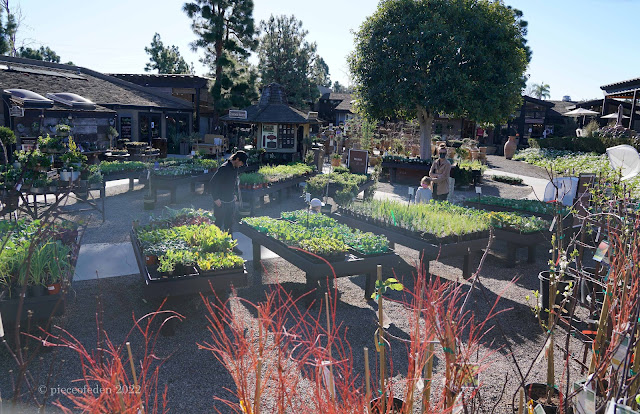 They had a small, very-so-so selection of Native Sons and Annie's Annuals 4" pots. 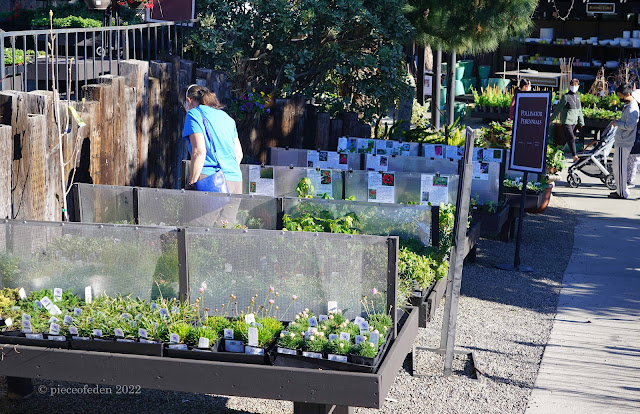 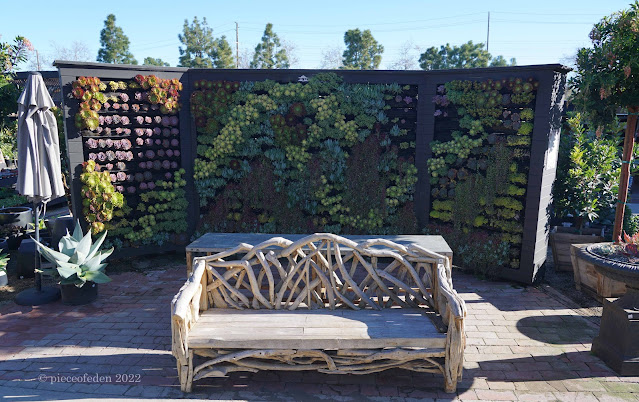 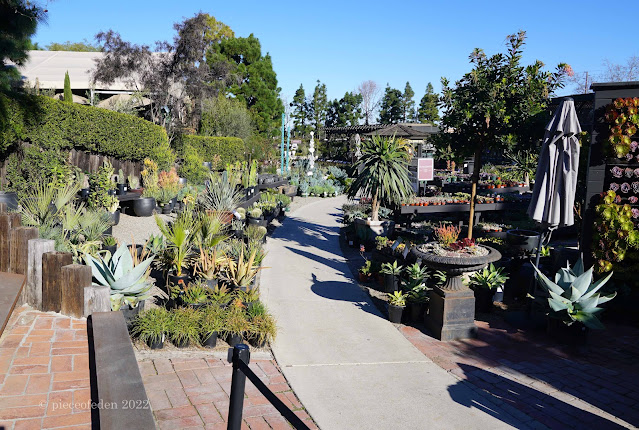 Lots and lots, but nothing out of the ordinary. 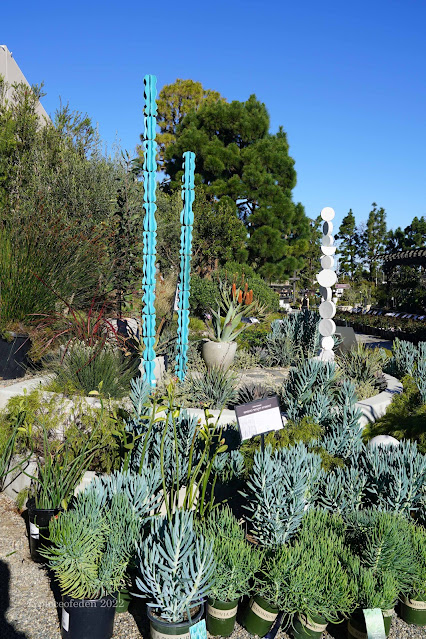 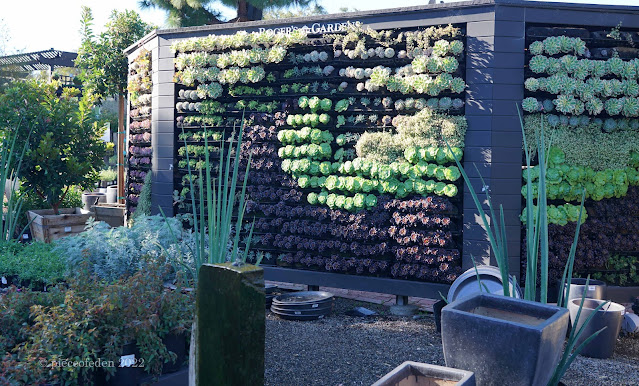 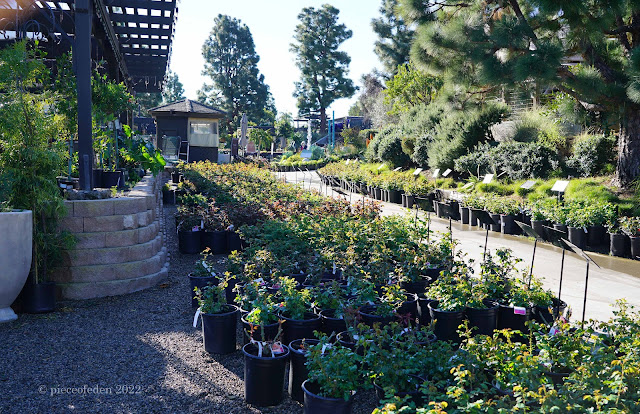 The shade plants section.  No hellebores.  Not a one.  I was puzzled. 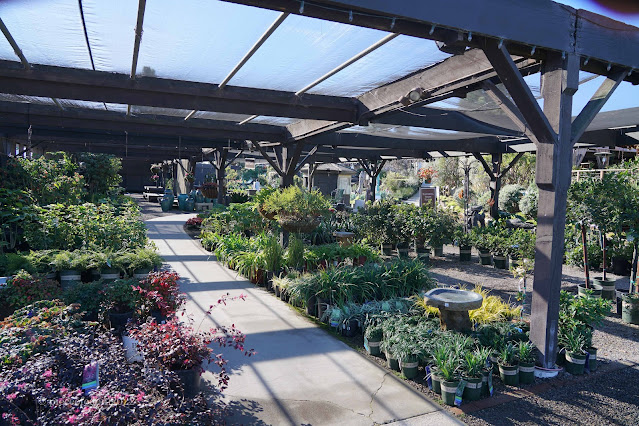 When it is "Rose Season" the roses are in the "North Forty" area.  At Christmas time, they have Christmas trees for sale here.  The rest of the year, they have shrubs, which is what they had Sunday.

Cool:  the wind spinners on the top of the sign: 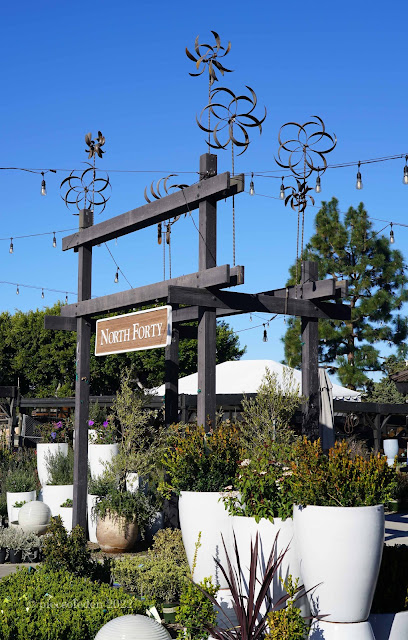 They had a good supply of Leucadendrons, Grevilleas and Leucospermums, but nothing must-have-new.  Just the usuals. 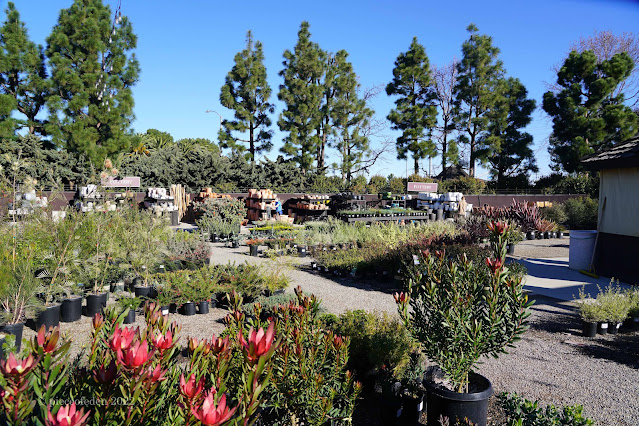 Interesting to see six 15-gallon Metrosideros 'Springfire's.  I've never seen them for sale here before.  They looked really good but they wanted $229 apiece for them.  I bought mine either 1 or 3 gallon size, for a whole lot less than $229. Another shade area, and no Hellebores anywhere. 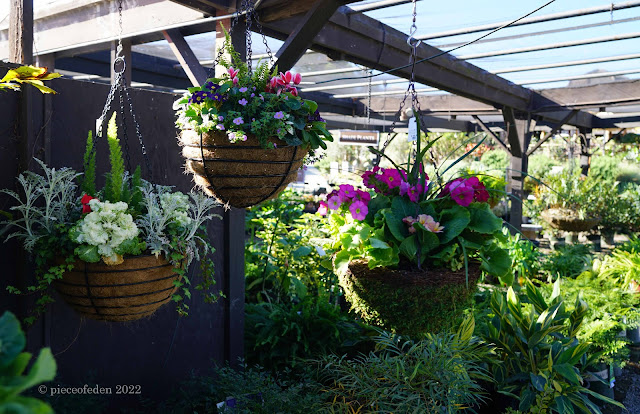 Ferns and Melianthus and Mahonias and such.  No Hellebores. 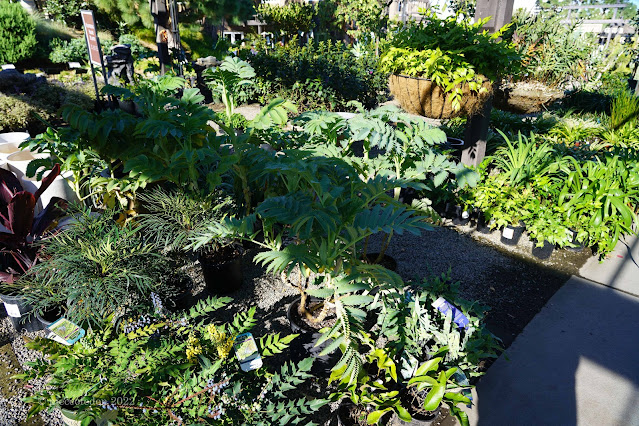 Specimen Platyceriums that have lived here many years. 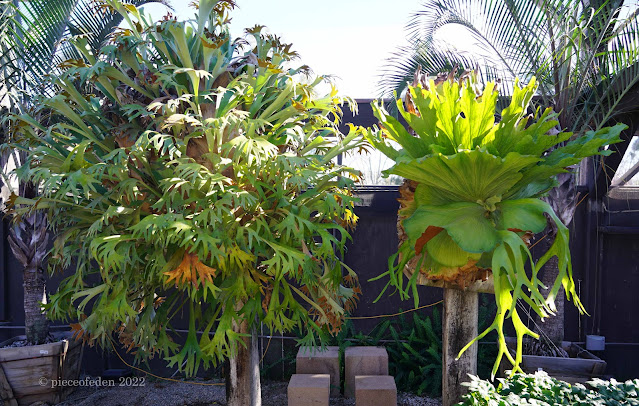 Their usual section of cool-season annuals are not going to like this week's weather--we're expecting temperatures in the high 80sF (~30c) and humidity in the single digits.  Iceland poppies, primroses--they do okay right along the ocean in winter here, but a few miles inland--toast. 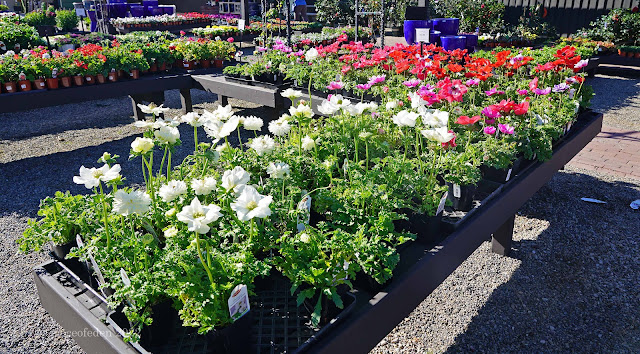 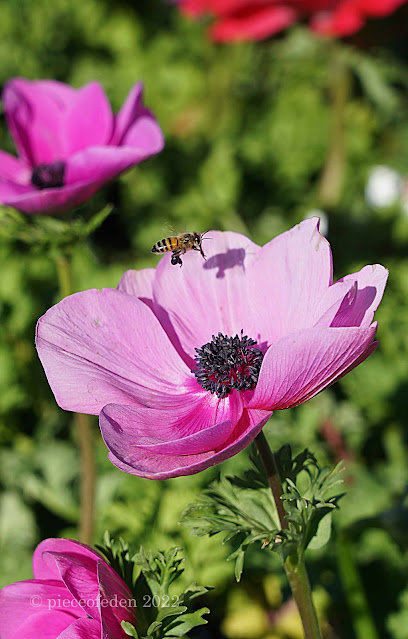 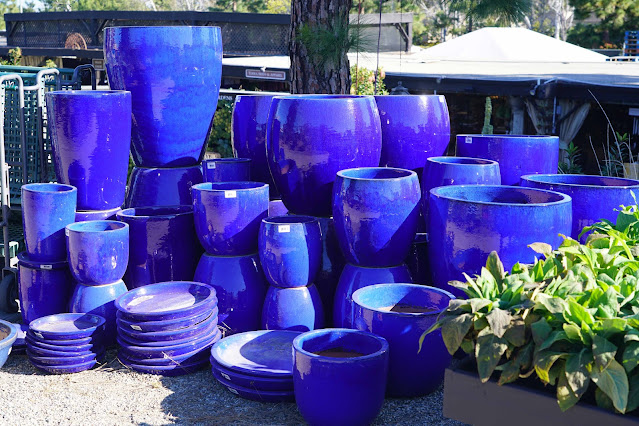 There's the Primroses.  I tried some once.  They couldn't take heat. 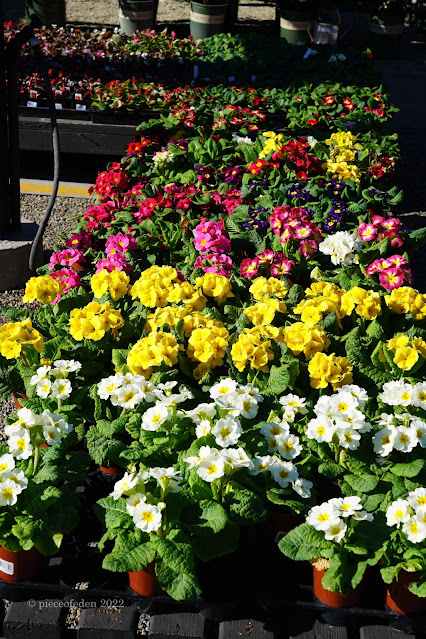 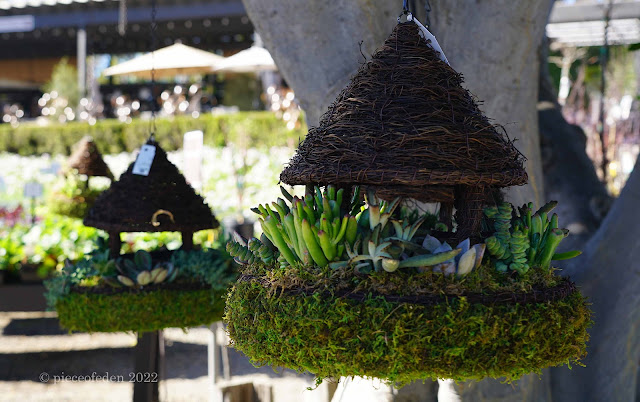 Okay, there are the Hellebores!  They were up front.  We walked right past them. 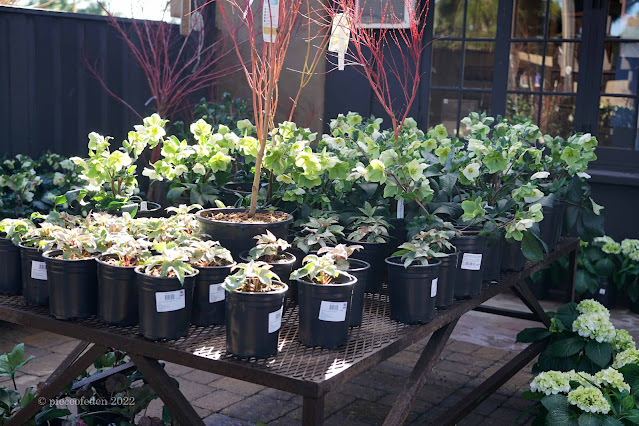 They had a hundred at least, in one and three gallon sizes, but  only three different selections/cultivars,  'Double Pink', 'White Ice', and H. argutifolia 'Pacific Frost'.  There was exactly one 'Blue Lady', 30% off due to snail damage to the foliage.  Got that one, a 'Double Pink', and the 'Pacific 'Frost', the first photo of this post.

Below,Snail-damaged 'Blue Lady' on the left, 'Double Pink' on the right.  'Pacific Frost' was the first photo of this post.

'Blue Lady' is said to have purple flowers, but gardeners will buy anything with 'Blue' in the name, so they didn't call it 'Purple Lady', though they should have. 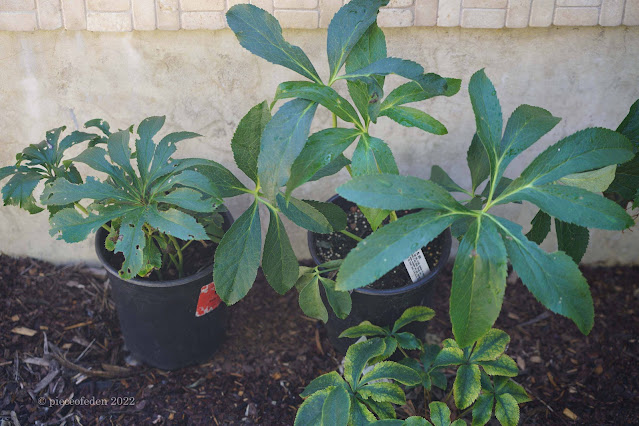 Also succumbed to trying Felicia amelloides one more time--there were some healthy ones in the 4" pot section from Annie's Annuals.  Why they won't grow well here still puzzles me.  One more try, then I give up.  The flowers are a magical blue, which is why I keep trying.  Gardeners and anything blue, you know. 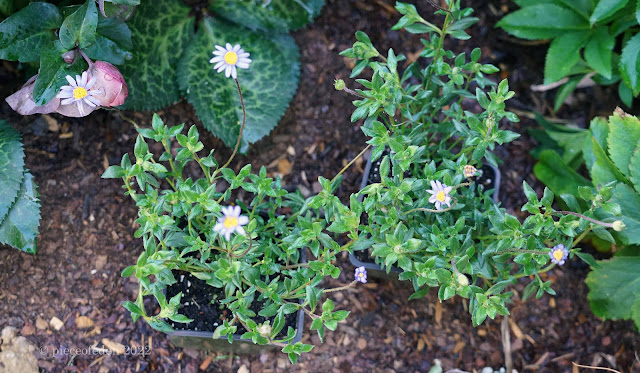 Back at home,  it was time to pull everything out of this area by the back gate.  There were three small roses that looked good for about one month out of every twelve, some meh Hemerocallis, a clump of Aloe 'Rooikappie' that was offsetting too much, some Senecio serpens that needed to be cut back, and a few small Echeverias and Haworthias that needed refreshing and replanting. 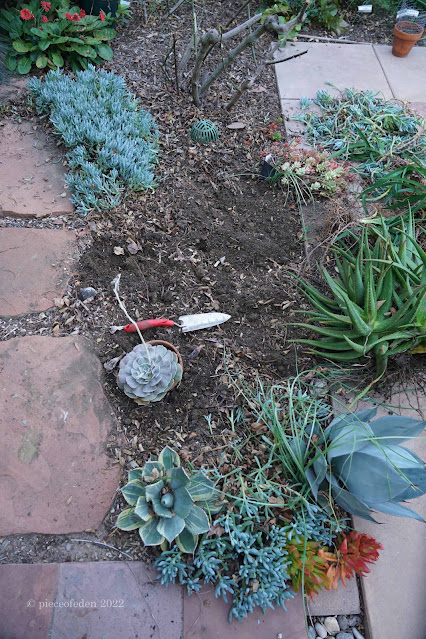 This small area is a little problematic.  The Callistemons that nicely screen out the back neighbor's house don't have as wide a bed as they deserve: 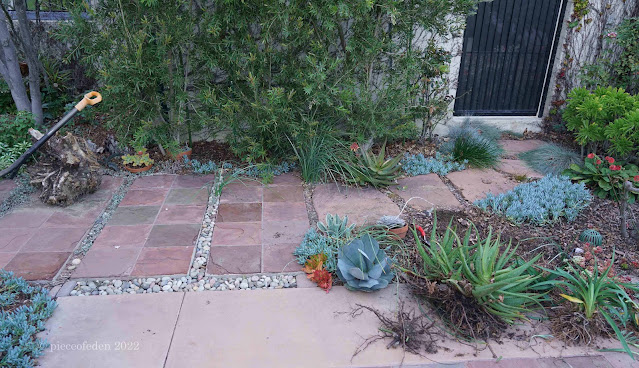 I've considered re-arranging the stepping stones to give them a bit more width...something like this: 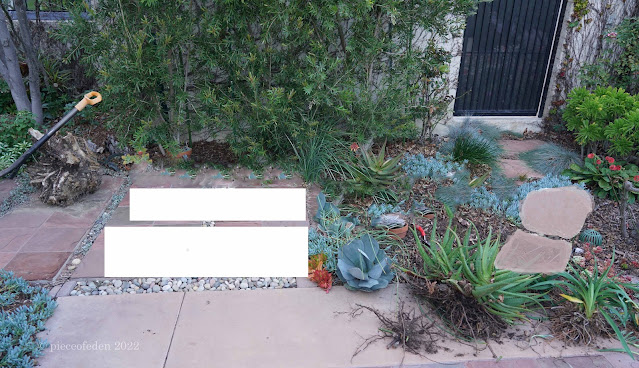 But I'm still undecided.  While being undecided, I did a thorough pruning of 'Sombreuil' rose, something that hasn't happened for several years. 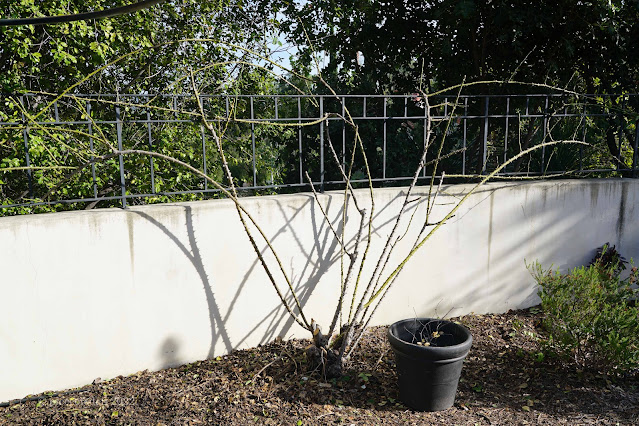 Now it will be hot, dry, and windy for several days.  Grrr!