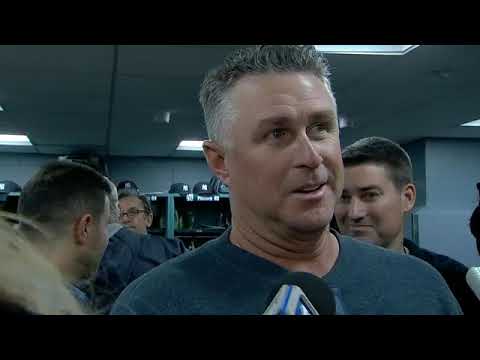 Next Tigers manager won’t be Nevin, Thames, or Mendoza

The Yankees have a lot of important decisions to make this offseason with regard to their roster. Between retaining DJ LeMahieu, improving the pitching staff, and figuring out what to do behind the plate, Brian Cashman figures to be quite busy between now and the start of spring training.

Fortunately, it doesn’t look like the Yankees will need to spend time figuring out who belongs on the bench. While the Tigers had interviewed Phil Nevin, Marcus Thames, and Carlos Mendoza for their vacant skipper position, it’s now clear that Detroit is on the verge of hiring former Astros manager A.J. Hinch. That’s good news for New York because all three guys (particularly Nevin and Thames) are key members of the Yankee staff.

Nevin became the Yankees’ third base coach prior to the start of the 2018 season. Since his arrival, he’s brought a bit of fire to the Bombers’ coaching staff. Phil is probably best known for his involvement in the Tyler Austin-Red Sox brawl and for lighting up the Yankees after they struggled against the lowly Orioles in 2018. This season, Nevin was ejected from a game against the Phillies after he got into a shouting match with Angel Hernandez.

I really hope that Phil is still a member of the coaching staff next season. He’s a former player, a good baseball guy, and a passionate leader. Phil is the bad cop on the Yankee staff, and his presence would have been sorely missed had he been hired by the Tigers.

In 2018, Thames became the Yankees’ head hitting coach. In three seasons under his mentorship, the Bombers’ lineup has had serious success. Here’s how the Yankees rank against the rest of Major League Baseball since Thames took over in 2018:

Sometimes the approach of the Yankee hitters can be frustrating, but the overall numbers are hard to complain about. With Thames coaching these players, the team has hit the snot out of the baseball. His return will be good news for the Bombers.

Mendoza isn’t as well-known as either Nevin or Thames. After floating around the Yankee organization as a defensive coach from 2013 to 2017, Mendoza was promoted to the big league coaching staff in 2018. This past season was Mendoza’s first as the Yankee bench coach.

It’s difficult to say how much of an impact Mendoza had in 2020. Gauging the value of a bench coach isn’t an easy task. While Mendoza is a bit of an enigma to Yankee fans, however, he’s garnered the interest of other organizations. In addition to interviewing with the Tigers, Mendoza has also been interviewed for the job of Red Sox manager. It will be interesting to see if any other teams reach out to the Yankee bench coach regarding manger vacancies for 2021.

Will They Stay or Will They Go?

Nevin, Thames, and Mendoza might be in consideration for other jobs around the league, but I still believe that all three will be back next season. The Detroit opening was probably the best bet for all three just a few days ago, and now that opportunity is essentially off the table. Expect this trio of coaches to be back in the Bronx as the Yankees chase a championship in 2021.

Next Tigers manager won’t be Nevin, Thames, or Mendoza