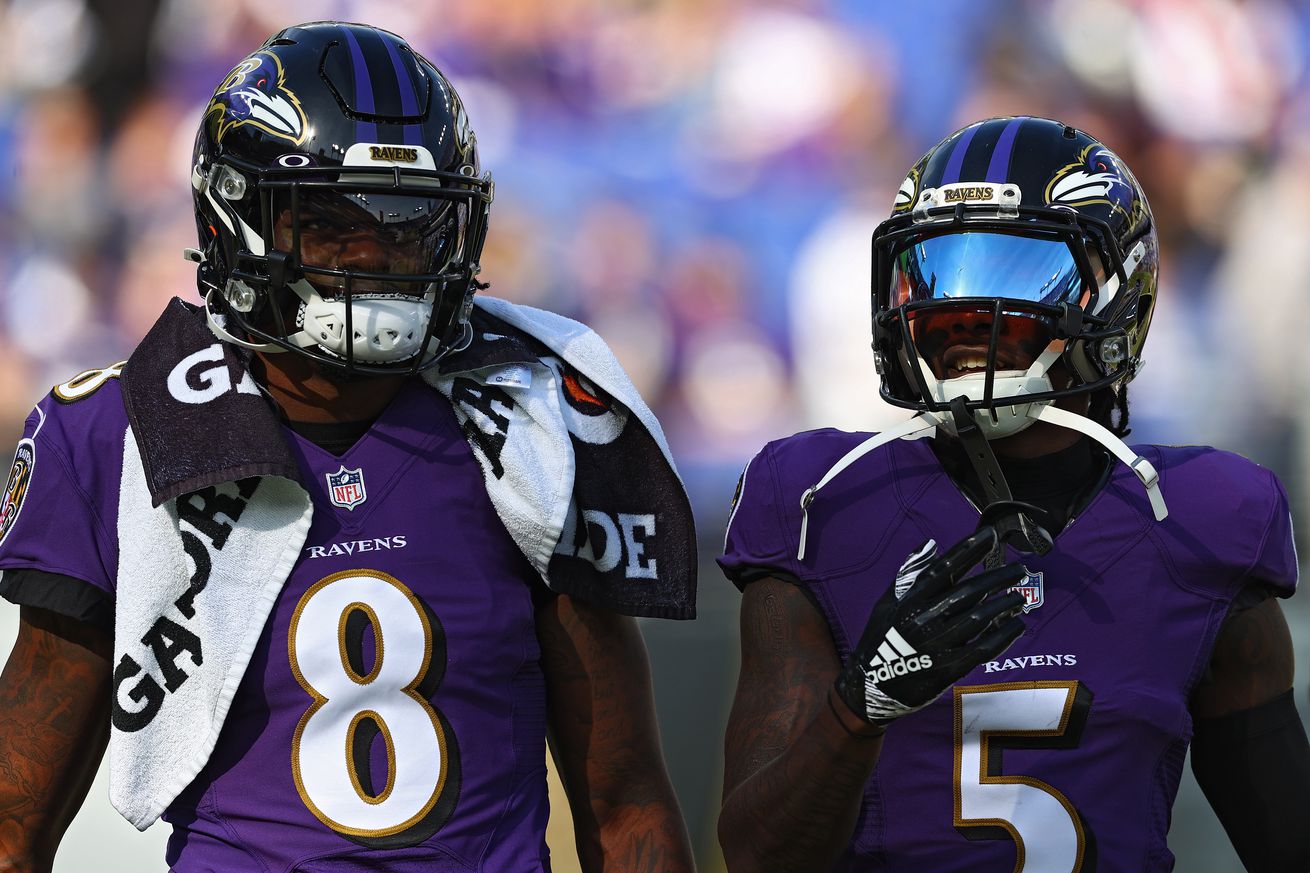 Lamar Jackson and Marquise Brown are both elite options at the captain spot for Thursday night’s showdown on DraftKings.

It seems like forever ago when we last saw Lamar Jackson and the Baltimore Ravens take on the Miami Dolphins. Back in Week 1 of the 2019 season, Jackson steamrolled the Dolphins with 324 passing yards and five passing touchdowns en route to a 59-10 win over Miami. It was just the beginning of a special season for Jackson, who would proceed to win the NFL MVP award in 2019 in just his second year in the NFL.

This time around, the Ravens have a much more polished version of Jackson under center, while the Dolphins have a defense that is rapidly declining. There’s a reason why Baltimore is considered touchdown-plus favorites over Miami in Week 10. Ahead of what could be another electric outing for Jackson, let’s take a look at who I’m liking in my captain and flex spots for Thursday night’s Showdown slate on DraftKings between the Ravens and the Dolphins.

Ah, it’s the man of the hour. Jackson has put the Ravens on his back this season and should be a front-runner for MVP in my eyes. He has been better than his MVP season thus far, throwing for 2,209 yards, 13 touchdowns, and seven interceptions in eight games. Jackson also leads Baltimore in rushing with 600 yards and two touchdowns on 97 attempts. It’s hard not to like Jackson — even at such a hefty price — against a Dolphins defense that is giving up the eighth-most points per game (20.12) to quarterbacks. And on DraftKings, Jackson is the rare quarterback that has an opportunity to get you the valuable bonus of 300+ passing yards and 100+ rushing yards in the same game.

While Jackson has severely improved as a passer, whenever he does air the ball, Marquise Brown has become one of his favorite targets. Brown is WR5 in half-PPR formats this season, and he leads the Ravens with an impressive target share of 26.95% through the first nine weeks. The speedy wideout has seen 26 targets in the last two games, while he always has an opportunity to get double-digit points on a single play. With DraftKings rewarding a full point per reception, Brown is absolutely in play in the captain spot. The Dolphins have surrendered the third-most points per game to wide receivers on DraftKings, which further cements Brown as a strong play on Thursday night.

I wanted to take one of the members of the Dolphins to plug into my captain spot, so I elected to go with the cheapest of the bunch. Mike Gesicki may be listed as a tight end on the depth chart, but he’s essentially a wide receiver in a tight end’s body. With DeVante Parker on injured reserve for Miami, targets are being funneled to three guys in Gesicki, Jaylen Waddle, and Myles Gaskin. For Gesicki, the matchup is a premier one, as the Ravens have struggled to slow down tight ends this season. Baltimore has allowed the second-most points per game (18.44) to tight ends throughout the first nine weeks, and in the past four weeks, they’ve given up the fifth-most points per game (17.17) to tight ends on DraftKings. Regardless of whether it is Tua Tagovailoa or Jacoby Brissett at quarterback for the Dolphins, Gesicki should be busy again in Week 10.

Aside from Gesicki, Waddle is seeing a vast majority of the targets for the Dolphins. Even though his aDOT (6.7 yards) isn’t where we want it to be, volume is king. The rookie first-round pick out of Alabama leads Miami with a 21.59% target share thus far. Waddle is WR16 since Week 5, and even in a perceived tough matchup versus the Ravens, he should be given plenty of opportunities on Thursday night. Baltimore’s defense hasn’t been atrocious to wide receivers, but they have allowed the 15th most points per game (34.27) on DraftKings to wide receivers in the past four weeks. Seeing that Gesicki and Gaskin are the only threats to steal usage from Waddle, play the rookie wideout with confidence on Thursday.

Playing a running back from the Ravens this season seems to be an absolute nightmare. With J.K. Dobbins and Gus Edwards being out for the season, Baltimore was forced to turn to multiple veterans in Latavius Murray, Devonta Freeman, and Le’Veon Bell to fill the void. Murray is currently injured — and is considered doubtful — so after looking like the most explosive option in Week 9, Freeman would be my choice at running back from the Ravens. The veteran rusher finished with a season-high 79 rushing yards on 13 attempts, while also grabbing two passes for four yards and a touchdown in Week 9. While Jackson is essentially RB1 for Baltimore, Freeman appears to have potentially earned the starting role until Murray returns.

DraftKings knew exactly what they were doing when they priced Rashod Bateman and Sammy Watkins. There is only $200 separating the two, and with Watkins returning to a full participant in practice on Wednesday, he is seemingly trending toward being active for the first time since Week 5. Amid Watkins’ absence, Bateman has benefitted quite a ton, earning 6+ targets in all three of his appearances thus far. The rookie wideout has caught 12 of his 20 targets for 152 yards, gaining the trust of Jackson through the air. It remains to be seen how the Ravens divvy up the targets with Watkins back in the mix with Bateman, Brown, and Mark Andrews. So if you’re someone that plays multiple lineups, I’d make sure to get exposure to both Bateman and Watkins.

There aren’t many obvious low-dollar options on Thursday night’s slate. Maybe you take a shot on Patrick Ricard catching a touchdown for the second straight week, or maybe Salvon Ahmed steals a few touches from Gaskin. But with the Dolphins running 12 personnel (one running back, two tight ends, and two wide receivers) a league-high 55% of the time, Durham Smythe is a viable dart throw on Thursday night. Smythe isn’t going to get the usage of Gesicki, but he does have the fifth-most targets on the Dolphins, and we don’t need him to do much at his low salary. If we could get a touchdown out of Smythe, we’re looking at a nice salary-saving option on a slate where paying up for members of the Ravens could be the optimal route.