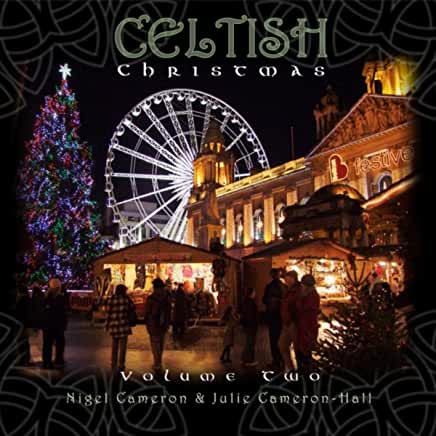 The last time I worked with Nigel Cameron was about a ten years ago at a Scripture Union Camp in Avoca, County Wicklow. I was speaking and he was leading the worship with keyboards, whistles and an imaginative stack of percussive bits and bobs. He was good at it.

In the decade since, a lot has changed for Nigel. He got married and moved to England. The marriage was a musical partnership made in heaven. Julie Hall is a fiddle player and when that was wedded to Nigel’s whistles and Celtic percussion Celtish was born.

This is their 5th album and the second volume of Christmas songs.

What Nigel and Julie have birthed is an authentic Irish folk bedrock, centred on Nigel’s Irish traditional back ground honed in the band Slemish. Founded firm on an East Belfast boy’s whistles they set upon it Julie’s south England fiddle and then her voice.

We end up in the a space of territory between Loreena McKennit and Cara Dillon. Julie’s voice brings McKennit’s more classical voice and Nigel makes it more authentic like Dillon though perhaps not as raw.

If you like your traditional carols, a Christmas album with Christ still in the word, then this is full of your favourite choices. Julie’s voice will make the songs warmly familiar and evoke memories of Christmases past. But you will also be hear them afresh with the intricately imagined musicianship not only by Nigel but guest musicians Dave Bainbridge, Russ Sargeant, Phil Hart and Uilleann piper Nick Metcalf.

There is the more driving almost Horslipsy Dance Of The Shepherds with a beginning that blurs the Irish and middle eastern in an Afro Celt System blend. Bainbridge’s guitar shimmers and shines.

Hark The Herald Angels gets a new tune in a Scottish pipe lament. I love it when these guys blend trad tunes to carols. My particular favourite is the fusion of While Shepherds Watch Their Flocks to the Irish traditional Dimming Of The Day which you might know as Raglan Road.

I enjoy my Christmas Celtic records. Cara Dillon’s Upon A Winter’s Night, Horslips Drive The Cold Winter Away, The Chieftain’s The Bells Of Dublin and Moya Brennan’s An Irish Christmas are all perennials. I can now add to that Celtish Christmas.