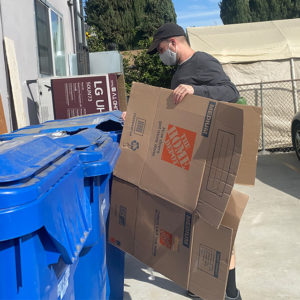 OSLO, Norway — The Norwegian Nobel Committee awarded their famed Nobel Peace Prize to Los Angeles resident Ned Thompson yesterday for his groundbreaking work in the field of conscientiously separating and folding cardboard boxes before throwing them away in apartment building recycle bins.

“In this especially difficult year of 2020, people worldwide set new standards of charity and mercy. But no candidate showed true selflessness like Ned Thompson, resident in apartment 2A of the Sunset Palms apartment complex,” announced Berit Reiss-Andersen, Chairman of the Norwegian Nobel Committee. “He consistently cuts his bulky cardboard boxes into individual panels, and folds those too large to fit. Mr. Thompson has a deep understanding of volume and density as those concepts apply to recycle bin usage, despite his neighbors’ ignorance. May every human being on Earth learn from his example.”

Thompson graciously accepted one of the world’s most prestigious honors.

“I can’t say I was trying to make a statement or start a movement, but I really do wish more people would take the extra 10 seconds to break down their boxes. These recycling bins are small, and there are 16 units on this property,” said Thompson, who has received praise from the Dalai Lama, Oprah, and Greta Thunberg, to name a few. “Maybe I’m the only one ever doing it in my building, but I just want to be a good person in my daily life, you know? It’s a better world if we don’t leave our ATM and gas station receipts for the next person to fumble through, or if you pull up to the last possible spot on the curb, so more cars can park behind you.”

Critics claim that despite Thompson’s otherworldly compassionate spirit, those fighting the more widely-covered issues in 2020 may deserve the award.

“I treated literally hundreds of coronavirus patients in New York City starting in March… and to be a final nominee for the award, yet lose to Thompson?” wondered Dr. Wendy Lewitt, who works in the emergency room of New York Presbyterian Hospital. “I mean, I guess it makes sense — he doesn’t even get paid to break down boxes, so how can I claim to be any more deserving? I really can’t.”

The Norwegian Nobel Committee is allegedly considering Thompson for next year’s Peace Prize as well after multiple past exes confirmed that he will routinely go down on his partner and want nothing in return.

The post Nobel Peace Prize Awarded to Only Person in Apartment Building Who Breaks Down Their Boxes appeared first on The Hard Times.