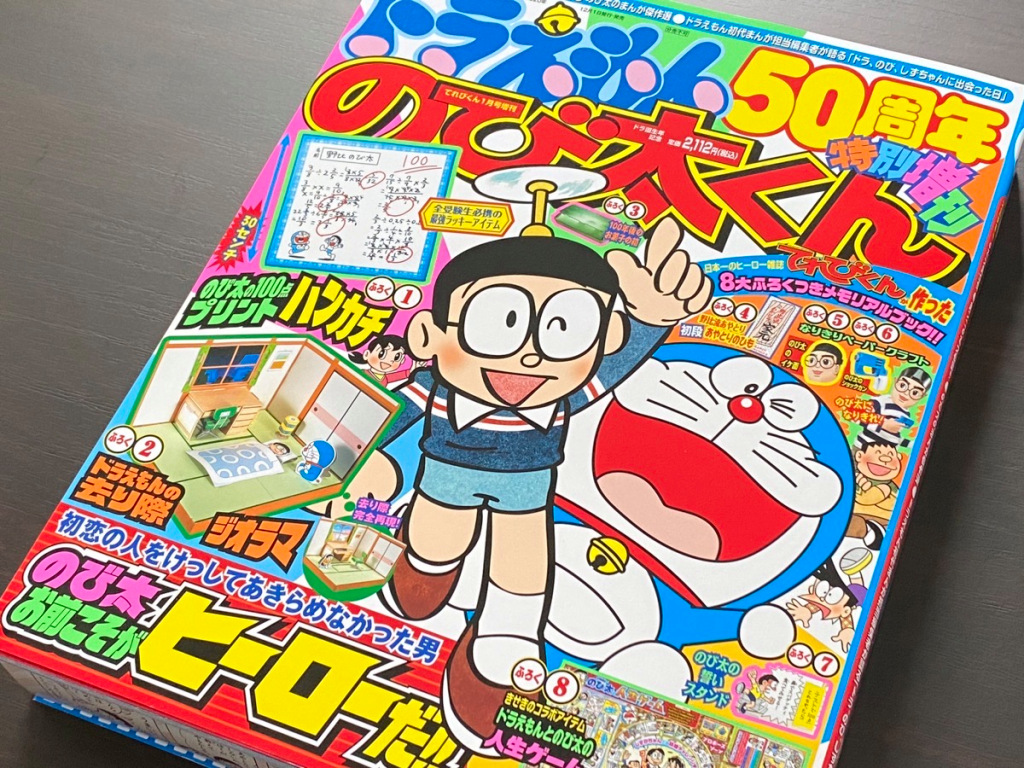 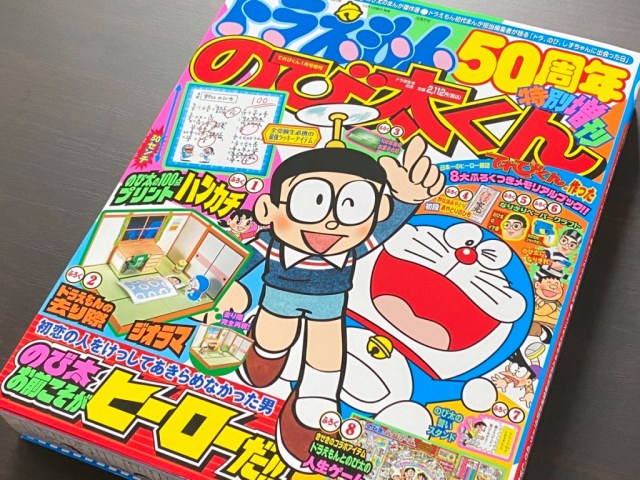 This special, lovingly crafted issue was released in celebration of Doraemon’s 50th anniversary. Even its price is symbolic.

Doraemon began serialization as a manga by Fujiko Fujio in a variety of children’s magazines published by Shogakukan. 2020 marked the gizmo-toting, time-traveling blue robotic cat‘s 50th anniversary and various celebratory events began to take off for the beloved character that has by now accompanied generations of children around the world on their paths to adulthood.

Late last year, a special companion issue to the franchise titled Nobita-kun (the name of Doraemon’s bespectacled charge known as Noby in English) was published. Like many of Shogakukan’s releases, this volume contains a furoku, or bonus supplement inside. Our Japanese-language correspondent Saya Togashi purchased the special volume and became unexpectedly emotional at all of the childhood memories that it brought back.

▼ Special bonus issue Nobita-kun and its entire box (!) of furoku 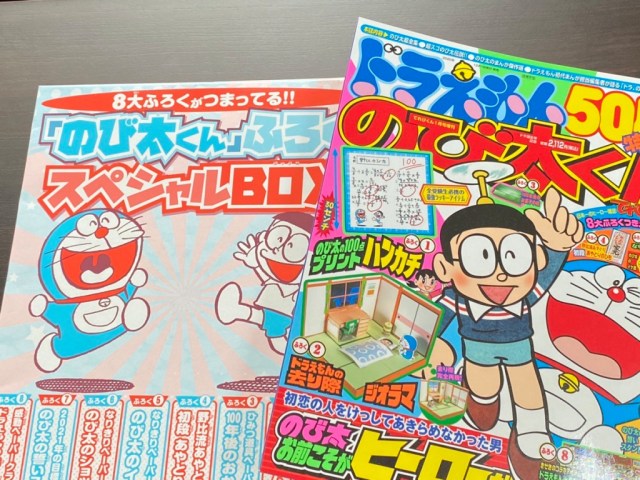 To be more precise, Nobita-kun is a special issue of the January edition of long-established children’s monthly manga magazine Terevi-kun. The magazine portion of the bundle was affixed to the furoku box along its spine but it was easily detached. The entire package puts a spotlight on Nobita and is packed full of special content and trivia celebrating him and the franchise’s titular robotic cat.

▼ A close-up of the furoku contents 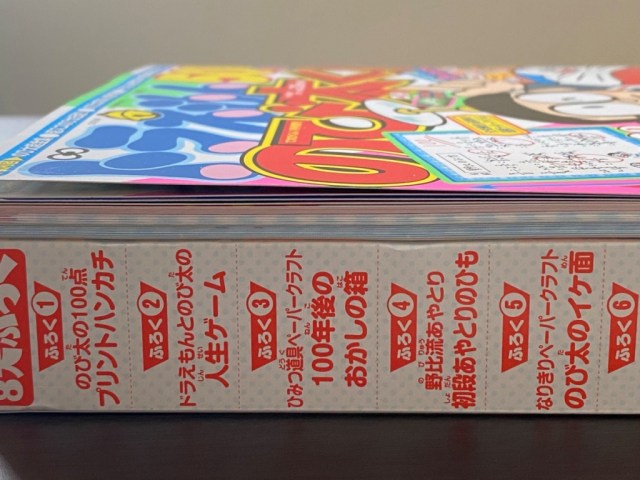 Inside the furoku box were a whopping eight splendid treasures. Let’s take a look at each of them in more detail. 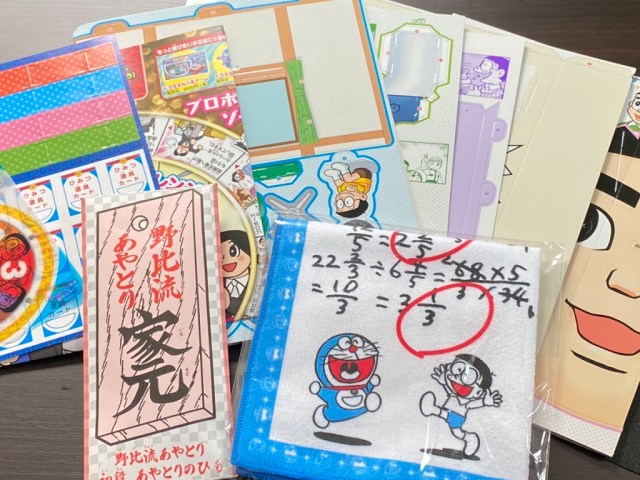 This handkerchief faithfully immortalizes the first and only time that Nobita scored 100 points on a test. A note in the package dubs it “the world’s luckiest item for students about to take entrance exams.” It’s also decently large and practical for many purposes.

There’s a popular impression that Nobita always scores 0 points, but according to Nobita himself that only happens once every five times or so. 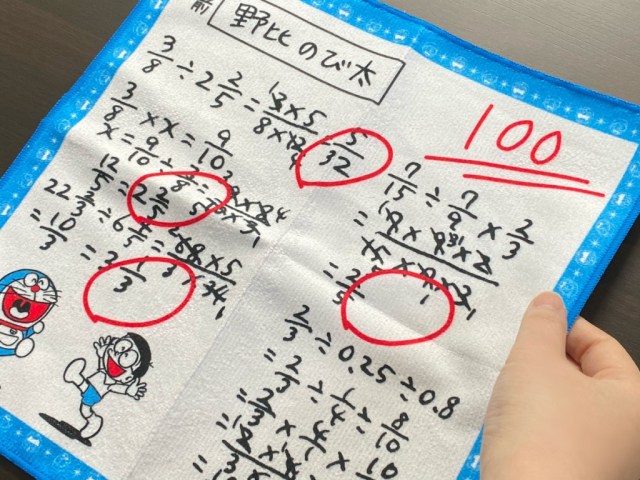 In order to win his crush Shizuka’s (Sue in English) heart, Nobita asks his talented artist classmate to “redraw” his face. It was both easy and intuitive for Saya to assemble this paper craft. She particularly appreciated the fine details, like the glasses being a separate piece to be added at the end. 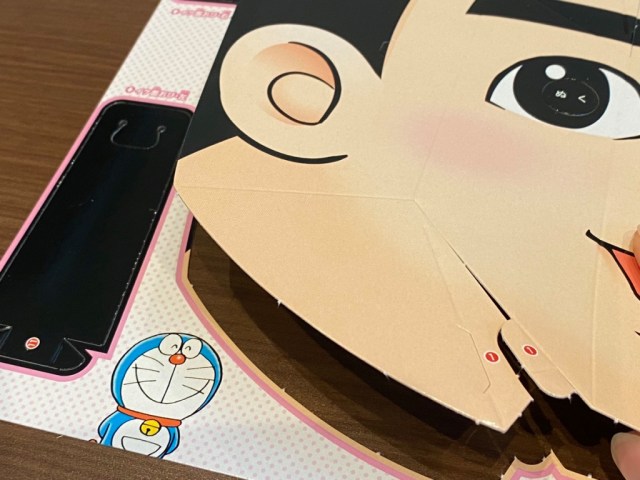 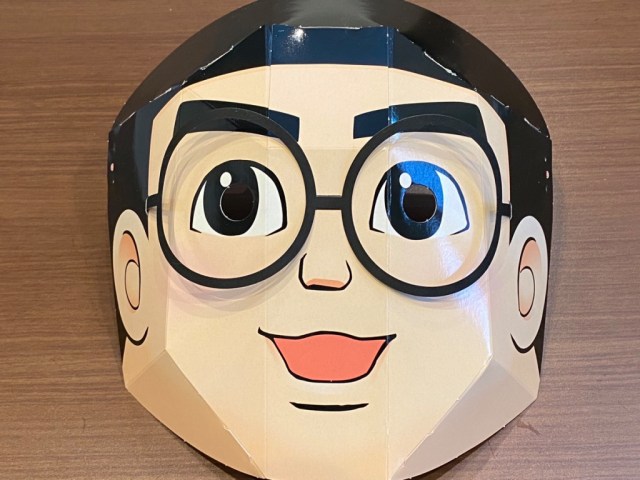 This secret gadget renders opponents unconscious for a short time. Despite his usual clumsiness, Nobita has been known to step up to the plate when necessary and use this device to advance his plans. 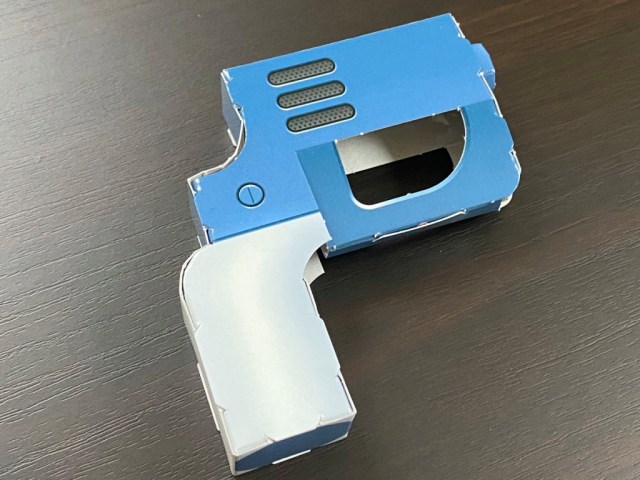 Nobita makes a plan to get rich quick by reselling items of the past using Doraemon’s time machine (he’s kind of a resale pioneer in that sense). He uses his profit to order candy from 100 years in future which arrives in this glittering box. 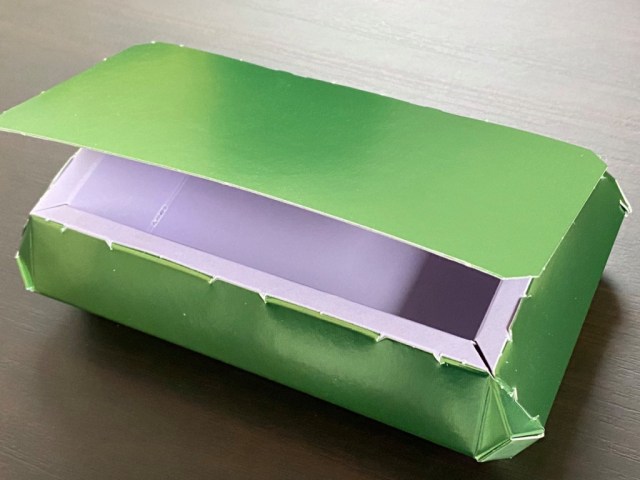 Use this stand to display your New Year’s resolutions and keep them in constant sight. It comes with two sheets to write your goals on alongside a visual of Nobita proclaiming that he will eat spaghetti through his nose [if he fails to show his friends a dinosaur]. Use this as motivation to keep your goals so you don’t have to make similar promises. 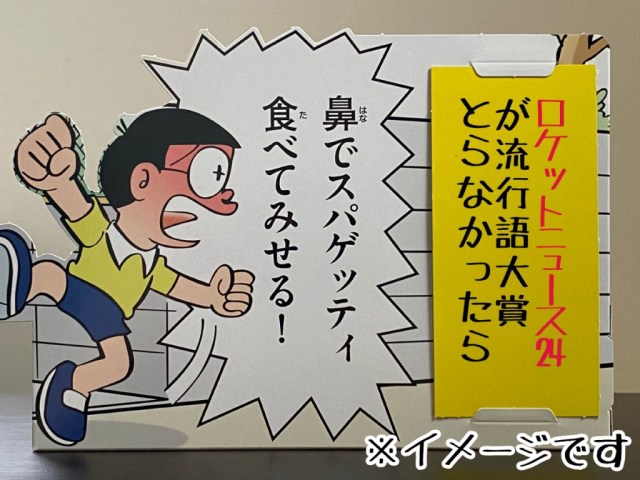 Don’t be deceived, because this isn’t just any old string. One of Nobita’s few talents is his prowess at cat’s ayatori. There’s even a story where Nobita becomes the master of “Nobi Style Ayatori” after writing his name on a secret gadget sign (replicated on the envelope below). Now you too can bask in the fame of being an ayatori genius. 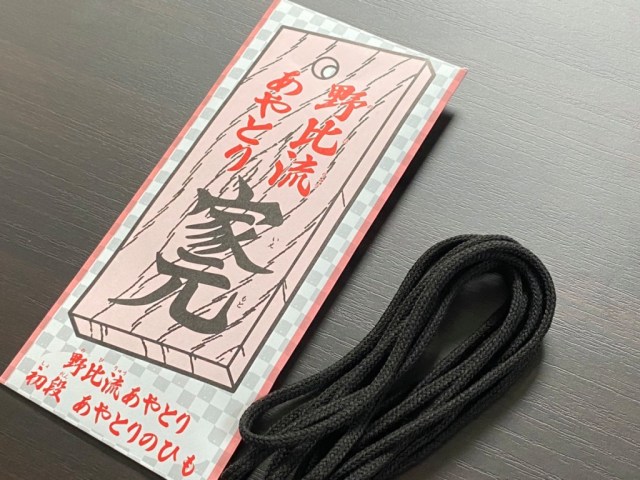 Doraemon and Nobita’s game of life

Toy company Takara Tomy has actually released this as an official game, but this bonus version is pretty darn good for what it’s worth. The aim is to collect “Nobita points” (not money) in order to marry Shizuka. Secret gadget cards are there to help or throw a curveball along the way, but they won’t work once you’ve entered the “proposal zone” near the finish line. The cards also reference many famous story lines from the franchise. 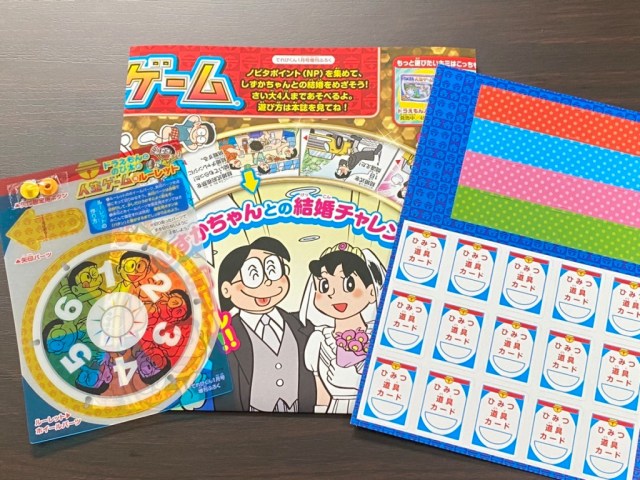 This is the showstopper piece of the whole bundle. It’s inspired by the heart-wrenching story in the 6th manga volume when Doraemon says goodbye to Nobita because he’s achieved his original purpose of helping Nobita grow and goes back to the future. 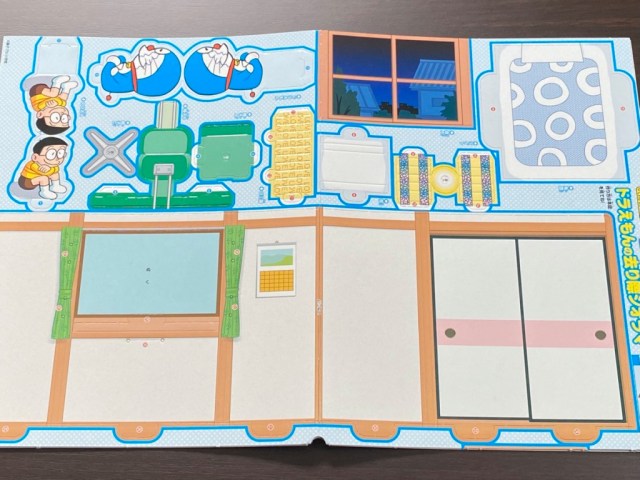 It was fairly easy for Saya to assemble Nobita’s room by inserting the various marked slots into each other. There were separate punch-out pieces for the furniture and characters, and the desk chair even used a piece of straw as a prop. 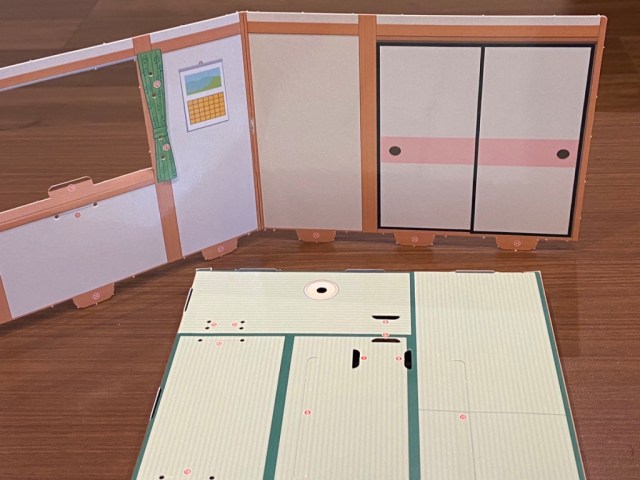 In a clever twist, there were interchangeable window pieces to customize the diorama for a night, morning, or daytime scene. 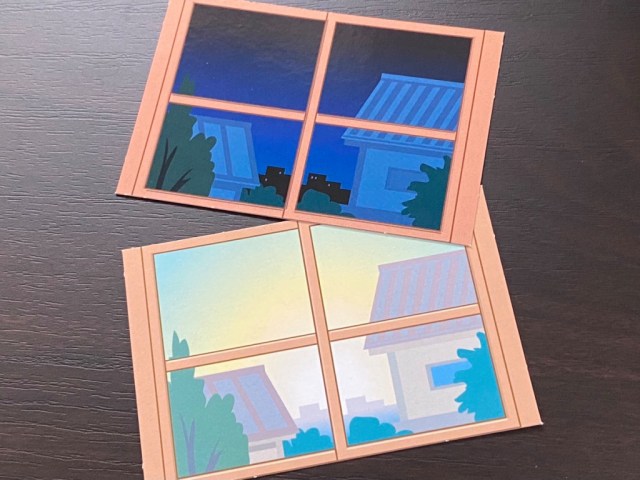 Night version: Doraemon watches over Nobita protectively while he sleeps and crys tears of happiness at his growth. 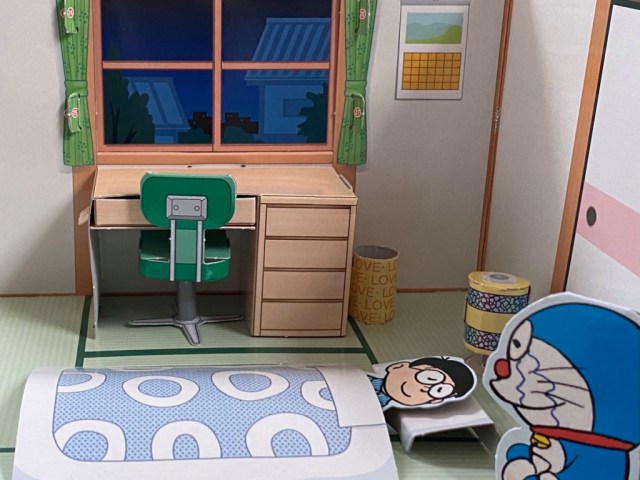 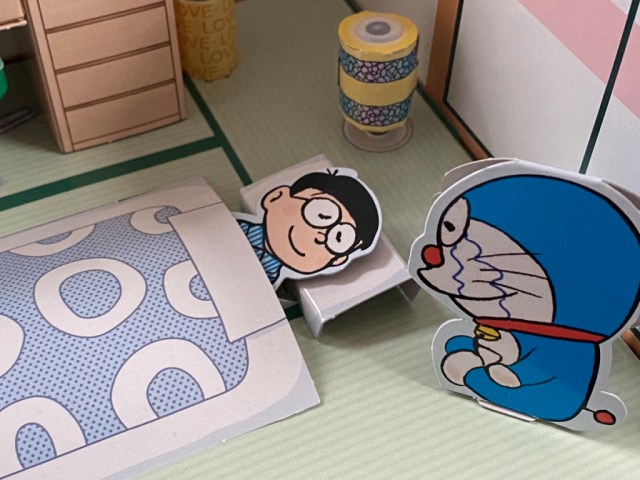 Morning version: The morning sun shines into the window. The sleeping Nobita has pulled the futon cover up to his face in slumber. Meanwhile, Doraemon is nowhere to be seen. 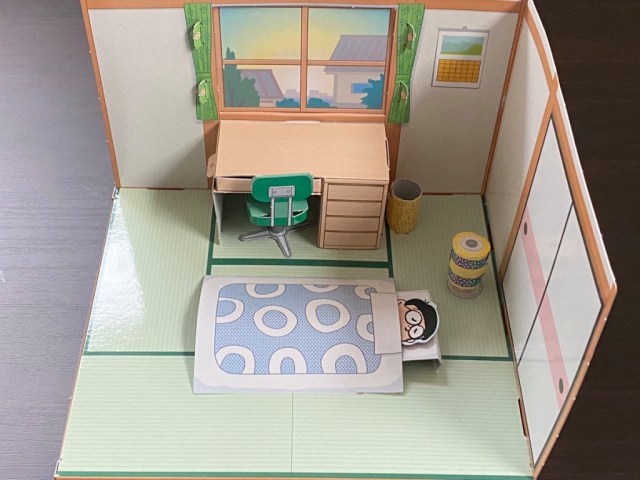 Daytime version: Nobita is awake and realizes that Doraemon has left by virtue of the empty desk drawer and missing time machine. His face shows hints of loneliness but he smiles bravely. 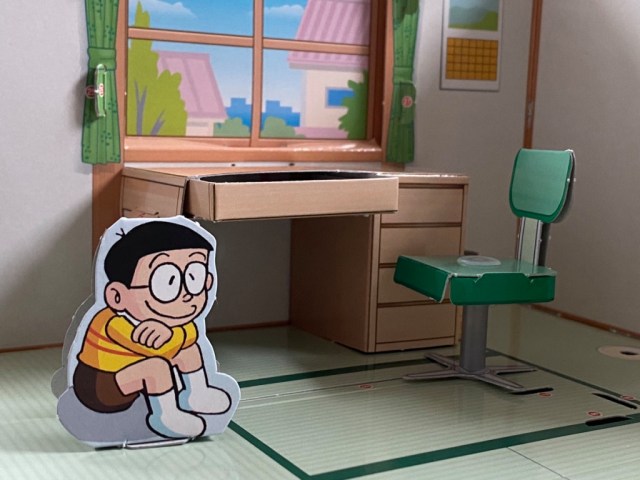 It was this diorama that absolutely destroyed Saya and brought back memories of tearing up as a child. Doraemon’s story could have ended at this bittersweet point but thankfully continued in manga and anime form. 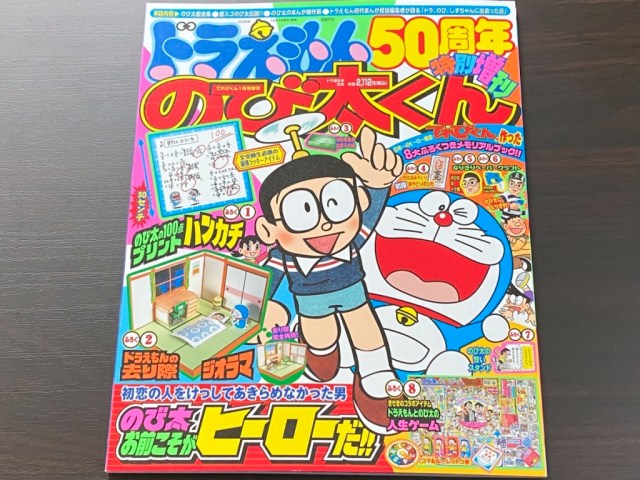 After exploring the contents of the magazine issue as well, there was one final surprise waiting for Saya. Something had seemed familiar when she purchased the issue for 2,112 yen (US$20), and then it finally dawned on her:

Perfection. Every aspect of this bonus volume was made with loving care and attention to detail. The issue was a good read for children and adults alike, with plenty of behind-scenes-trivia from the original publishers. In fact, Saya thought that adults might be able to appreciate its secrets even more than children. These timeless characters will undoubtedly remind you of the magic of childhood.