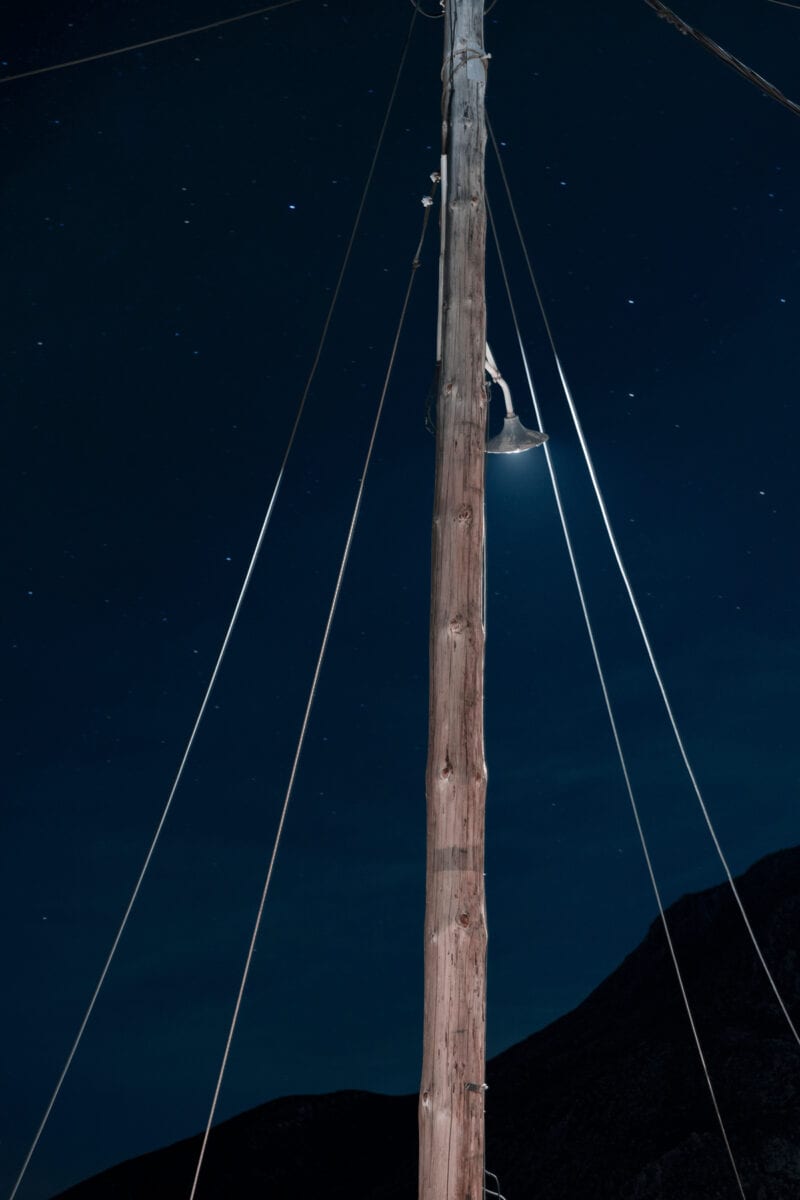 The Sony World Photography Awards (produced by World Photography Organisation) provide a vital insight into the contemporary landscape of photography. Now in its 14th year, the awards consist of four competitions: Professional (for photographers entering a body of work or portfolio), Open (for photographers entering a single image), Student (for academic institutions) and Youth (for 12-19 year-olds).

Ioanna Sakellaraki, was announced as Student Photographer of the Year in 2020. Her series, Aeiforia, depicts Tilos – a tiny island in the Dodecanese archipelago close to Turkey – which is the first island in the Mediterranean to run almost entirely by renewable energy.

A: Aeiforia focuses on the challenges of sustainability – particular on energy dependency – on islands. Why did you choose to focus on Tilos in particular? What story were you looking to tell?
IS: I heard about the island of Tilos back in 2017 when it won the Energy Islands’ Award and Public Vote Award at the European Sustainable Energy Week. Soon enough, I found out that this tiny island – in the Dodecanese archipelago – is the first in the Mediterranean to run almost entirely on renewable energy. Until a few years ago, the idea of an island being fully reliant on clean energy was almost unthinkable; that fact alone made the story of Tilos unique to tell. Once on the island, and more specifically in Megálo Chorió, where only 70 inhabitants live over the winter, I spent time familiarising myself with the surroundings and getting a feeling of the landscape.It was only after I started making the first images of the islanders’ rooftops that I realised how strangely shaped the handmade devices were – the wires they used to help sustain their households throughout the winter. They become an organic part of the scenery at night. The harmonic symbiosis between this technology and the dry and mountainous landscape of Tilos became the focus of Aeiforia.

A: Do you feel the series is documentary or fine art? Is there value to being both, or neither?
IS: Part of the series can be read as documentary – in the sense that it is following and capturing a real-life narrative on the island of Tilos. However, the aesthetic approach is closer to fine art. The island is not traditionally photographed; the landscape sets the tone for a conversation between reality and imagination. Both time and place are ambiguous. When you look at these images, you do not necessarily think of green energy, but the nocturnal ambiance acts as a guide for audience’s thoughts and senses. Tilos is unique both because of its profound aura but eventually, also due to its narrative within geological history.

A: How did you begin the series, and did it change along the way?
IS: I began the series, as usual, by researching around theme of sustainability once it was announced by WPO. I was looking for a powerful story that would trigger my interest but also contribute to collective knowledge. I knew that the rest would come through my photography. The first night I arrived from London to a larger nearby island and took a small boat to Tilos. Locals helped me with transport to the Megálo Chorió area where I stayed. The first image was taken on my balcony late that night. The darkness had fallen and only thing I could see was one electric column with soft light brushing off its cables all the way down to it with a starry sky surrounding the background. The island did not present itself to me in quite the same way again; I captured an enigmatic moment through photography. Along the way, I continued my night explorations, responding to certain compositions and their unique lighting.

A: The works are both aesthetically pleasing and melancholic, looking at how wires and branches become entwined under nightfall. Why did you choose to create this sense of harmony and symbiosis? How does it reflect the island’s self-sufficiency?
IS: The dark offers uncanny estrangement and kind of suspension in the landscape: out of time. Wondering off at night, these images were offered to me under the raw winter moonlight. I experienced a sense of isolation and remoteness, emotions which are strongly connected with the climate crisis and sustainable development. The insularity of Tilos is interesting; experiencing the island in wintertime helped me orchestrate the dialogue between nature and the attempts of the local households to remain self-sufficient. This is perhaps why the compositions are both pleasing and melancholic; they are newly coming together in a form of symbiosis.

A: The images are crisp and minimal, with a sweeping blue backdrop. How did you play with colour and lighting?
IS: Part of the assignment process was to work with Sony equipment, so I used the Sony alpha 7iii. As I normally shoot in analogue medium format, I was surprised with how the equipment became, almost organically, part of the project. The low light settings of the camera are simply amazing. The winter sky is cast under the raw moonlight and the dry landscape near the vastness of the archipelago, set the right scene for unfolding my narrative further. The simplicity of the island combined with its unique aura only strengthened the compositions as the project evolved, night after night.

A: How has winning the Student prize with SWPA affected your career?
IS:A great set of opportunities have come along my way and I am grateful for that. I recently showed new work The Truth is in the Soil in a solo exhibition as part of the European Month of Photography in Berlin as well as participated in Athens Photo Festival and Festival Circulations earlier this year. I have had the opportunity to elaborate further on my work with audiences through initiatives run by the World Photography Organisation on their blog and social media channels which has enhanced the interest to the work overall.

A: What advice would you give to other students thinking of entering?
IS: Make bodies of work that can speak to the wider audiences but, firstly, that speak to you. Being genuine and connected to your own style and vision whilst carrying out an assignment is an important part of the process. Moreover, follow interesting subjects, but also look for smaller scale stories.

The Sony World Photography Awards is open for entries until January 14, 2021 – 1pm GMT. Find out more about the Awards on www.worldphoto.org/swpa.

Aesthetica is on the jury for the Student Competition. The 2021 theme is Building a Better Future – open for entries until 30 November. Find out more here.

Credits: All images courtesy Ioanna Sakellaraki. From the Aeiforia series.