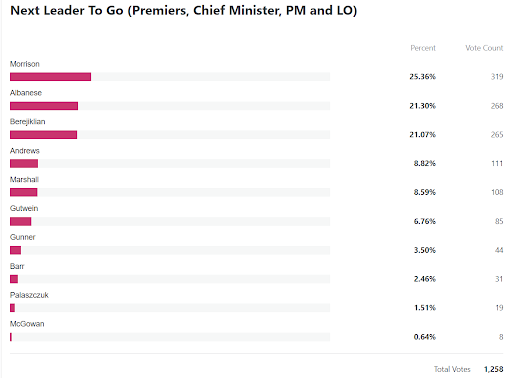 With Gladys Berejiklian resigning as NSW Premier to be replaced by Dominic Perrottet, the sidebar Next Leader To Go Not-A-Poll has been reset.  These were the previous results: 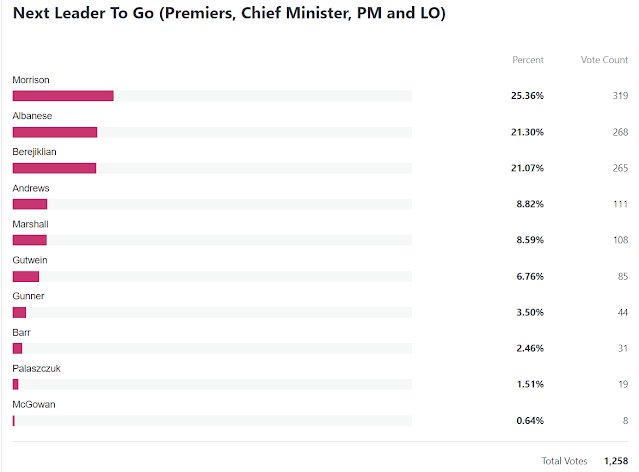 The Not-A-Poll was started in November 2020, at which time Berejiklian had just appeared before ICAC and testified about her former relationship with Daryl Maguire.  As a result Berejiklian was the early leader but as time went on readers may have believed she would survive the crisis at least long enough for one of the federal leaders to lose the election and depart.  She was overtaken by Albanese on 15 April 2021 and he was overtaken by Morrison on 10 Aug 2021.

From this round I am setting a new ground rule to cover an unseen-since-1975 but possible situation: if a Prime Minister loses the election but stays on as opposition leader then the poll does not pay out at that point.

Berejiklian is the first Premier or Chief Minister to leave office since Will Hodgman resigned as Premier of Tasmania on 19 Jan 2020.  While that may not seem so long a time, the intervening period has seen nine Opposition Leaders leave office: McKay (NSW), O'Brien (Vic), Frecklington (Qld), Harvey (WA), Kirkup (WA - lost seat), White (Tas - since returned to position), O'Byrne (Tas), Higgins (NT) and Coe (ACT).  And that's ignoring the weirdness in which Terry Mills may or may not have (I'm unconvinced) briefly held the NT opposition leadership.

The nearly two year spell without a change in Premier or Chief Minister anywhere in the country is also relatively unusual.  Since the NT and ACT both had Chief Ministers there have been only two longer spells, 5 March 2002-21 March 2004 and 19 March 2018-19 Jan 2020.  However the latter of these included a change of Prime Minister.  For the period without territory leaders the longest was Oct 1959 - Apr 1964 and the second longest the colonial period of Sep 1894 - Apr 1898, with six more of just over two years.  The colonial case is something of a miracle for reasons discussed in the next paragraph.

NSW sets a new state record for the longest run of consecutive terms in which the Premier elected at the start of the term was gone by the end of it (5).  The federal sphere is on a run of four which will be broken provided Scott Morrison sees out the term.  However the current chaos is nothing compared to the farcical chopping and changing of Premiers in the 19-th century colonial parliaments.  South Australia especially takes the cake here: its first six terms saw the elected Premier not serve out the term, followed by a seventh in which the elected Premier was Premier at the next election but only after a disruption in that status during the term.  Then another seven like the first six.  Charles Kingston, who took over after the 1893 election, must have had something going for him since he was then Premier for six and a half years.

A number of by-elections are coming, possibly in early December, with the impending resignations from Parliament of Berejiklian (Willoughby, Lib 21.0%), Andrew Constance (Bega, Lib 6.9%) and John Barilaro (Monaro, Nat 11.6%).  Others may be added.  By-elections in government seats usually see swings against the government (which is why the Upper Hunter result was so unacceptable for Labor) and these MPs are very prominent creating the potential for high swings.  At a quick look:

Willoughby is on too large a margin to be likely to fall on a 2PP basis but there is potential for an independent to win it if a sufficiently high-profile candidate runs.  In the event that Labor do run a double-digit 2PP swing is possible (the highest 2PP swing I can find for a recently departing Premier is 17.5% for the departure of Neville Wran) but in many cases oppositions do not run in such state by-elections.  2019 was actually the first time Labor had even made the final two in Willoughby since 1999, and the seat was very nearly won by the independent Mayor Pat Reilly in 2003 when Berejiklian first won it.

Bega in its current incarnation has always been Liberal-held but often with fairly close margins and the loss of Constance as an 18-year incumbent in a regional seat makes it the sort of seat that by by-election standards should be competitive.

Monaro is historically a volatile swing seat and its current margin has become greatly inflated by Barilaro's popularity, with a large swing to the incumbent as party leader at the 2019 election.

I am trying to devise a credible formula for estimating personal votes in NSW seats.  For federal elections I find that comparing the Reps and Senate 2PPs for the electorate in question compared to the state as a whole is often a reasonable method, but in NSW optional preferential voting in both houses makes things very complicated.  At the moment my suspicion is that Constance's personal vote is around 2-3% (above average, but not as large as some may think) and that Berejiklian and Barilaro take personal votes of several percent.

Currently the Coalition is in minority but has an effective one-seat majority (but no floor majority) with both John Sidoti and Gareth Ward on the crossbench and not voting in parliament.  NSW has a large crossbench including three Shooters, three active independents and three Greens.  Because of the size of the crossbench, even if one or two seats do fall in the by-elections it is not going to bring down the government, but it would be a nuisance for it.  There is also concern about the numbers pending the by-elections, and while being short of a few MPs would still seem to make a vote of no confidence unlikely (who is going to vote to install a Labor-Greens-Shooters-Ind mishmash minority government?) the issue could see parliament delayed or prorogued.  It's also possible the government will use stability as a pretext for one of those actions (the real motive being to avoid inconvenient votes in parliament on which it doesn't have the numbers.)

In the event of these and perhaps other by-elections being held on the same day I intend to have a live commentary thread on this site on the night.