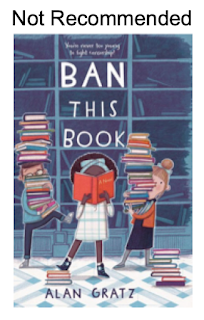 I've come to Dr. Reese's review of Indian Captive because of its appearance in Alan Gratz's 2017 novel Ban this Book. Gratz's story is about a schoolgirl standing up against book-banning in her grade-school library. At one point the avid young reader is suspended and grounded with nothing to read except Indian Captive. There is no commentary about the merits of the book, but it is mentioned several times, giving it a prominence above many of the books named in the story -- enough to send me to investigate. I can see no particular reason why this book was chosen for its role in the story (unless it's a very subtle indication that some books are not as good as others -- but it's quite a stretch to find that interpretation), other than mere carelessness by the author, indifference to the reasons a book may be offensive, or lack of awareness of the harm that books can perpetuate -- a naive belief in the magical goodness of every written word. It seems odd considering the theme of the story. Also odd given another theme of the story: good intentions that lead to bad consequences. As adults, we can understand the complexity of the real world, and the value of ambiguity in literature, but seeing that the issues raised by this one book's inclusion is not developed at all, and this in a novel for children, I can only see it as a flaw in an otherwise worthwhile book.

Gratz's Ban This Book came out in 2017. Published by Starscape (an imprint of Tom Doherty Associates with is part of Macmillan), the cover showed a school locker piled high with books. That same year, it was released as an ebook. The cover for the e-book showed three kids on the cover. More on that, later.
Here's the publisher's description of the book:

In Ban This Book by Alan Gratz, a fourth grader fights back when From the Mixed-Up Files of Mrs. Basil E. Frankweiler by E. L. Konigsburg is challenged by a well-meaning parent and taken off the shelves of her school library. Amy Anne is shy and soft-spoken, but don’t mess with her when it comes to her favorite book in the whole world. Amy Anne and her lieutenants wage a battle for the books that will make you laugh and pump your fists as they start a secret banned books locker library, make up ridiculous reasons to ban every single book in the library to make a point, and take a stand against censorship.

The story opens with Amy Anne and her friend, Rebecca, arriving at school. Amy Anne wants to go to the library to check out her favorite book (again) From the Mixed-up Files of Mrs. Basil E. Frankweiler. When she gets to the library shelf where her favorite book should be, it is not there. She sees the librarian, Mrs. Jones, enter the row. She describes her as being "a big white lady" (p. 12).
That detail, that Mrs. Jones is white, gave me pause. I paged back (in my electronic copy of the book) to see if Gratz had identified Amy or Rebecca in similar ways. On page 9, I saw that Rebecca's last name is Zimmerman and her parents are lawyers. When I paged back to the cover, I saw that the child featured prominently on the cover is African American. That is probably meant to be Amy Anne.
On page 16 we read:

I like a lot of other books too, especially Island of the Blue Dolphins, Hatchet, My Side of the Mountain, Hattie Big Sky, The Sign of the Beaver, and Julie of the Wolves. Basically any story where the main character gets to live alone. Indian Captive is pretty great too, even though Mary Jemison has to live in an Indian village. But I would rather live with Indian kidnappers than live with my two stupid younger sisters.

As you might imagine, I was taken aback by her list of favorites. They are full of stereotypes. And, they are old. Island of the Blue Dolphins came out in 1960, Sign of the Beaver in 1983, Julie of the Wolves in 1972, and Indian Captive in 1941.
The other three favorites have a word or two about Native peoples.
In Hatchet the main character, alone in the forest after a plane crash, imagines monsters he's read about, including Big Foot. He's talking about Sasquatch, a figure who has been misrepresented over and over in children's books! Sasquatch is not a monster. In chapter two of Charlene Willing McManus's Indian No More, the main character (Regina) is on the Grand Ronde Indian Reservation in Oregon. When Regina was little, she was afraid to play in the woods. Her dad told her that "Old Sasquatch won't bother you. First, he's shy. Second, he's over six feet tall and smells like a wet dog. And third, well, if he does bother you, you must've been misbehaving." In My Side of the Mountain the main character, Sam, imagines "feathers in an Indian quiver," thinks that "Indian bread" is flat and hard, and when looking at aspen and birch trees, sees that they are "bent like Indian bows." The main character in Hattie Big Sky moves from Iowa to work her uncles homestead in Montana. Several times, there are references to "free" land, but no mention of how or why that land is available in the first place. Hattie must know something about Native people, because when a character's face is covered in soot when a barn burns down, she imagines that he has warpaint on his face.
I wonder how these seven books shape what Amy Anne knows about Native people?!
There is no reason for any of these books to be named as favorites in 2017, by any reader. And yet, there they are. Why these ones, I'd like to ask Gratz. His book is well regarded by people who fight censorship, but in that fight, did he have to throw Native readers under the bus?
There's more.
As the book description noted, Amy Anne and others get organized and start filling out the library's Request for Reconsideration forms that people submit when they believe a book is inappropriate in some way. The goal is to make up reasons to ban every book in the library. On page 212, Janna (a student) has "every one of the Little House on the Prairie books in her arms. She starts to fill out the form and pauses. Janna says this to Amy Anne:

"But what do I say? There's nothing bad about Little House on the Prairie."

And here's what follows:

She was right. But no--that was true about all the books. I had to think like Mrs. Spencer.

"They get malaria in that one," I said. "That's scary, right? And the settlers think it's because they ate bad watermelon! But that's not how you get malaria. That's deliberately misleading. That could make a kid think you get malaria from watermelons!"

Nothing bad in Little House on the Prairie?! It, too, is old, and full of dehumanizing stereotypes of Native peoples.
Remember--Ban This Book--came out in 2017. What's up with the books Mrs. Jones is offering to students? Does she have no money to update the collection, adding books that would in some way, be mirrors for the Amy Anne's who are in that school, and, windows for them, too, so they could get better information about Native peoples? Does Mrs. Jones not know about the hashtag, #OwnVoices? It took off in 2015.
My questions are really for Alan Gratz. He wrote a book about an important topic. But on the way, he just dumped stereotypes all over Native kids and non-Native kids, too.
Did his editor notice this problem? Did any of the people who gave it positive reviews notice it? Or, any of the people on state award committees that gave it an award? I guess I know the answer. If anyone had any concerns, they probably stayed quiet. The book is about banning books, after all.
If Amy Anne's favorites included books that have won a Coretta Scott King Book award, I wouldn't be writing this post. If one of her favorites included a book that won an award from the American Indian Library Association, I'd be giving Gratz's book a "recommended" label instead of its "not recommended" one!
But, here we are. Bummer.