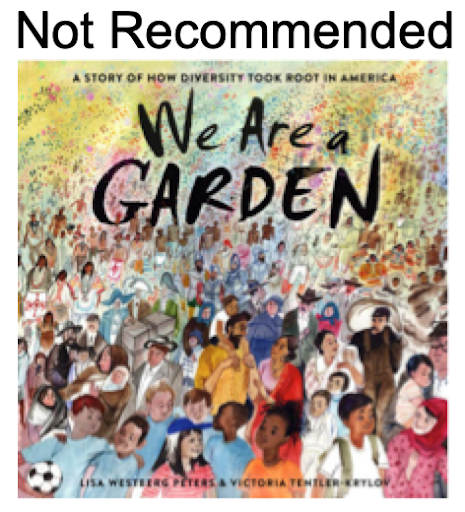 Not Recommended: WE ARE A GARDEN: A STORY OF HOW DIVERSITY TOOK ROOT IN AMERICA 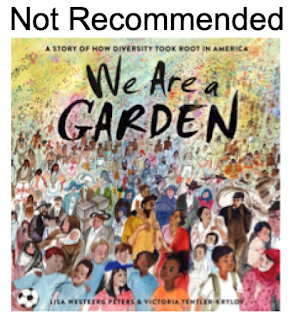 We Are A Garden: A Story of How Diversity Took Root in America
Written by Lisa Westberg Peters
Illustrated by Victoria Tentler-Krylov
Published in 2021
Publisher: Schwartz and Wade (an imprint of Random House)
Reviewer: Debbie Reese
Review Status: Not Recommended
To understand this critique of We Are A Garden: A Story of How Diversity Took Root in America you must begin with, and hold fast to, the fact that Native peoples were nations of peoples before the U.S. was a nation. Our status as nations is why Europeans and (later) leaders of the U.S. made treaties with leaders of Native Nations. If Native Nations were not seen as nations with leaders who could enter into diplomatic negotiations, treaties with us would not exist. But they do exist and they do matter, today.  We are sovereign nations. None of that is in We Are A Garden.
Published in 2021 by Schwartz & Wade Books -- an imprint of Random House -- the cover of We Are A Garden shows a diverse group of people. In the foreground, you can see them clearly. As your eyes move to the background, they become specks that I take to be seeds for this "garden" being depicted by the author, Lisa Westberg Peters and illustrator, Victoria Tentler-Krylov.
Generally speaking, most people view a garden as a good thing. I do.
The author and illustrator of this book use "garden" as a metaphor for the growth of what people know as the United States, but I view their use of it in a different way: With this book, Peters and Tentler-Krylov encourage the growth of a feel-good story that hides the truths of the United States and its history.
The back cover says:

The wind blows in newcomers from all directions. "They" become "we," and we become a garden.

Gosh. The wind did all that? Come on! Was it the wind that invaded and stole Native homelands? No. Was it the wind that captured and enslaved Africans? No!
Look at the subtitle: "A Story of how Diversity Took Root in America." It suggests that there was a place called America and that this book will tell you how it became diverse. Seems ok, but it isn't. Before "America" was known by that name, it was known by other names by the people who were there before those who called it "America." 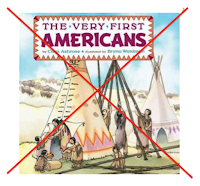 This is, unfortunately, a problem I see a lot. There are children's books with "First Americans" in their title/subtitle. As my red X on this book indicates, that is not ok! Native peoples had names for our respective nations (yes, we were nations before the U.S. was a nation) that pre-date "the United States of America." That fact should be common knowledge. Calling individuals "American" is also a problem. President Obama did that in Of Thee I Sing: A Letter to My Daughters when he called Sitting Bull one of thirteen "groundbreaking Americans."
In the last pages of We Are A Garden, you'll find a short glossary and two pages of information that correspond to the pages inside the book. This sort of information is often called "back matter" or "paratext." Here's a screen cap of how they appear: 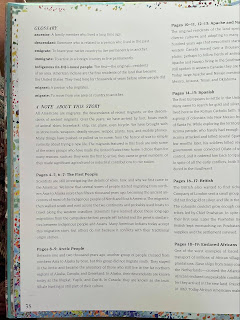 These notes are on pages 38 and 39. The first note is titled "A Note About This Story." It says in part:

That note does the same thing as the subtitle. By saying "All Americans," it ignores the facts that Native peoples used distinct names for themselves and their homelands. It erases who we were, and who we are. It misrepresents history. It miseducates children. Let's go back to the "story" we're told.
When we open the book, the words we read on the first double-page spread of the book are (p. 4-5):

Long ago a strong wind blew. It blew people, like seeds, to a new land.

It blew in a girl and her clan when glaciers still covered the north and herds of mammoths still wandered the frozen tundra. They walked across a wide plain and became the first people to live on the sprawling continent.

Scientists are still investigating the details of when, how, and why we first came to the Americas.

That first sentence of the note does two things. First, it tells us that what the author wrote on pages 4, 5, 6, and 7 is not fact. If you are a teacher or parent, how will you use that information when you read the book aloud to children? Will you use that note, at all? Or will you try to tell kids that the information on pages 4-7 is not accurate? Quite the mess, isn't it? And second, the use of "we" makes us all the same. It erases the status of Native Nations.
That "First People" note ends with (p. 38):

Many American Indians today accept this migration story, but others do not because it conflicts with their traditional origin stories.

Some of us object to that migration story because it undermines are status as nations! Why is that fact not included in the note?
The note for page 8 and 9 is titled "Arctic People" and refers to Inupiat, Yup'ik, Cup'ik, and Inuit but in on page 8 and 9, we don't see any of those names. Instead, we see "a boy and his family" and "they."
The note for page 10-11 and 12-13 is titled "Apache and Navajo Ancestors" but those words are not on those pages. Instead, we read "the first people" and "they" and "the people" and we see a southwest landscape with a man, woman, and small child standing together.
The note for pages 14 and 15 is titled "Spanish" and focuses on "Acoma people" who were attacked and killed by Juan de Onate's soldiers when they would not share their food with the soldiers. On page 14 and 15 we read that the wind "blew in a string of wagons carrying colonists" who settled on a high desert plateau, whose leader soon "slaughtered the tribe that was living there." To me, "slaughtered the tribe" sound like every single person of that tribal nation was killed. They weren't. Onate ordered that the right foot of every surviving man be amputated as punishment, but the people of Acoma were--and are--strong. They weren't wiped out. They are a thriving people, today, whose leadership continues to fight for its people. A recent example is their successful campaign to reclaim a sacred shield taken from them years ago.
On page 16 and 17 of Peters and Tentler-Krylov's picture book, we read about a sailing ship of boys and men seeking gold and silver. When those boys and men had trouble growing their own food, they took food supplies from the villages. The note in the back matter tells us that the page is about the British and the Powhatan people--but "Powhatan" isn't on page 16 or 17. That's another erasure of Native sovereignty.
At that point, we've read about one-third of the way through a book that tells readers that Native peoples are immigrants. Historian Roxanne Dunbar-Ortiz writes:

Misrepresenting the process of European colonization of North America, making everyone an immigrant, serves to preserve the "official story" of a mostly benign and benevolent USA, and to mask the fact that the pre-US Independence settlers were settlers, colonial settlers, just as they were in Africa and India, or the Spanish in Central and South America.

That passage is from an article she wrote in 2006, for Counterpunch. It could have been about We Are A Garden!
On page 18 and 19, we read that the wind "blew in slave ship after slave ship full of men, women, and children." And, that "Traders had forced them from their homes" to work in plantation fields for people who did not treat them like humans. Here's how that page looks: 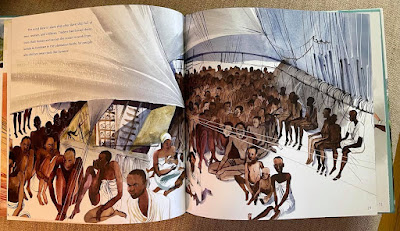 Does that illustration match with your understanding of those ships? Shall I go on, talking about misrepresentations of people? Of history? Of facts?! I'm at the halfway point in the book. Obviously I do not recommend it. Who was the editor that worked with the author and illustrator? Who was the acquisitions editor that bought it for this imprint? Who was the art director that worked with the illustrator on the art that would be developed for each page?!
I've been fussing with this review for weeks. (If there are typos or unclear statements, let me know!) Rather than fuss any longer, I'm sharing what I've written and hope that you'll speak up about problems you see in the book, or that you'll share what I've noted. I have no doubt that a certain segment of US citizenry will like this book, a lot. It suits their view of the United States--but it misrepresents so much. It miseducates youth--and miseducation is not acceptable.
Source: americanindiansinchildrensliterature

Not Recommended: WE ARE A GARDEN: A STORY OF HOW DIVERSITY TOOK ROOT IN AMERICA