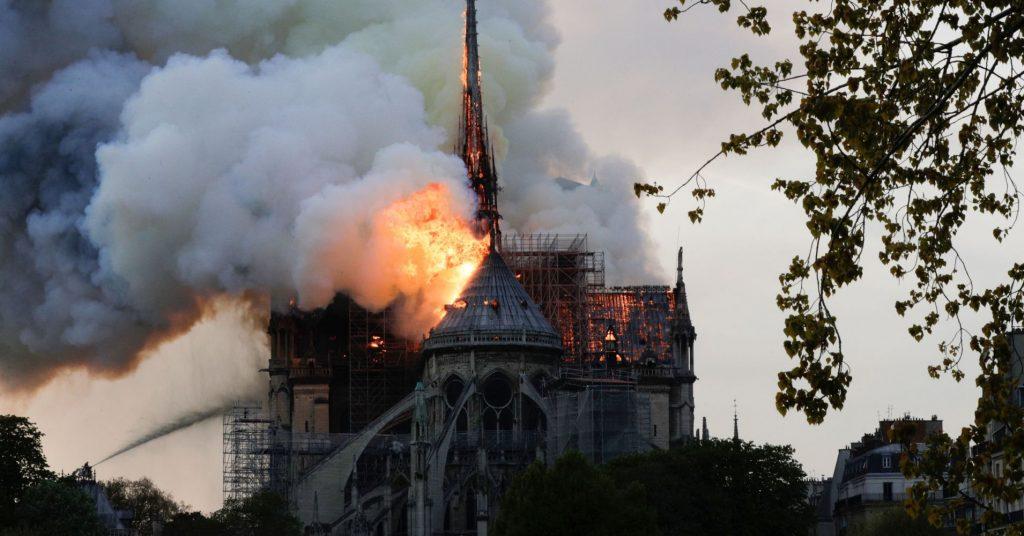 Notre Dame and the Death of Europe

A magnificent cathedral in Paris that stood for over 800 years, and even survived the Second World War, is now basically no more – consumed by flames. As the news breaks, we do know what a devastating loss this has been. Perhaps some of it however can be saved – we shall see. As one news item states:

Thousands of Parisians watched in horror from behind police cordons as a ferocious blaze devastated Notre Dame Cathedral, destroying its spire and a large part of the roof. Firefighters battled to contain the fire, which began at around 6pm on Monday. An investigation has been opened by the prosecutor’s office, but police said it began accidentally and may be linked to building work at the cathedral. The 850-year-old gothic masterpiece had been undergoing restoration work.

The French president, Emmanuel Macron, attended the scene and later gave a speech in which he vowed that the cathedral would be rebuilt, as fire crews said the landmark’s rectangular bell towers and structure of the building had been saved. Macron said “the worst had been avoided” thanks to hundreds of brave firefighters who battled for hours and who would continue working through the night. One firefighter was severely injured but no other casualties were reported.
www.theguardian.com/world/2019/apr/15/notre-dame-fire-paris-france-cathedral 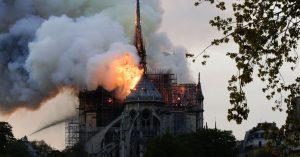 It is still early days so we do not know all the reasons for this tragic loss. Was it accidental? Was it arson? Was it another terrorist attack? This too will become more clear as time goes on I trust. But in the meantime it is such a tragic loss.

Given that my wife and I lived in Europe for five years, she quickly shared the bad news about this with me this morning. But then she came back a bit later – after listening to radio reports – to say that there might be a bit of hope after all, with crowds of Parisians gathering on the streets, singing hymns. Check out this moving video:
edition.cnn.com/videos/world/2019/04/15/notre-dame-fire-people-sing-hymns-vpx.cnn/video/playlists/notre-dame-cathedral-fire/

Yes maybe this is what it will take to wake up a sleepy church and encourage Christians to stop being so apathetic about what has been happening for so many years now. Maybe believers there will finally be stirred out of their slumber and realise that war has been declared on them and their faith. We will see.

As mentioned, hopefully we will learn many more details in the hours and days to come about the actual cause of this terrible inferno. But what we do know is France in particular and Europe in general has had a whole set of massive problems in this area. Attacks on churches have now become routine, including arson attacks.

One news item has this to say:

A spate of thefts and vandalism in French churches has led to calls for the government to act. Recent incidents have included a fire in Saint-Sulpice church in Paris, human excrement smeared on the wall in Notre-Dame-des-Enfants church in Nîmes, southern France, and vandalism of the organ at Saint-Denis basilica outside Paris, where all but three of France’s kings are buried.

Opposition politicians have said that the country’s Christian heritage is being threatened by petty criminals encouraged by militant secularism. Critics say the issue is being ignored in a society over which Catholicism has lost the hold it had for centuries. Figures released by French police showed that 875 of France’s 42,258 churches were vandalised last year. Thefts were reported in a further 129.
www.thetimes.co.uk/article/vandalism-at-hundreds-of-french-churches-n509gwb0d?fbclid=IwAR1mi_9_sXDRVX2-QNgoAcS568bszopxE2kq6XBz8PiENnOkx4VQK0-_LOE

Another report puts it this way:

While Notre Dame is undoubtedly the most well-known landmark to be affected, Paris’ second largest church, Saint-Sulpice, briefly burst into flames on March 17, the fire damaging doors and stained glass windows on the building’s exterior. Police later reported that the incident had not been an accident….

February saw a series of such attacks across France. In one incident, a cross of human excrement was smeared on the wall of the Notre Dame des Enfants in Nimes, the vandals also looting the church and spreading consecrated wafers in the garbage. The same month, the altar at Saint-Alain Cathedral in Lavaur was set on fire, while statues and crosses were smashed throughout the premises. Two teenagers were later arrested in relation to the incident.

In another incident on February 4, a statue of the Virgin Mary was found smashed on the ground at St. Nicholas Catholic Church in Houilles, Yvelines. Just days later, the Eucharist was scattered and the altar cloth soiled at Church of Notre Dame de Dijon.
www.rt.com/news/456629-french-catholic-churches-attacks/?fbclid=IwAR2IlbLmOpqq2OYwKeMJyGTfxh5UfTKCGEbJ_dPuF5XuqgCe2c_QH4tTM74

And one more report:

A dozen Catholic churches have been desecrated across France over the period of one week in an egregious case of anti-Christian vandalism. The recent spate of church profanations has puzzled both police and ecclesiastical leaders, who have mostly remained silent as the violations have spread up and down France.

Last Sunday, marauders set fire to the church of Saint-Sulpice — one of Paris’ largest and most important churches — shortly after the twelve-o’clock Mass. Police have concluded that the fire was the result of arson and are now looking for possible suspects. The restoration of the church from the damage caused by the fire will reportedly cost several hundred million euros.

In Nimes (department of the Gard), near the border with Spain, the church of Notre-Dame des Enfants was desecrated in a particularly odious way, with vandals painting a cross with human excrement, looting the main altar and the tabernacle, and stealing the consecrated hosts, which were discovered later among piles of garbage. Likewise, the church of Notre-Dame in Dijon, in the east of the country, suffered the sacking of the high altar and the hosts were also taken from the tabernacle, scattered on the ground, and trampled….
www.breitbart.com/faith/2019/03/20/twelve-french-churches-attacked-vandalized-in-one-week/?fbclid=IwAR3zm4JCsG35CKSinkSukCs9TBDBh3353EqYa_s-eW16A7ydN0JrlxSP4ys

And this from several years ago:

Police believe that the jihadist cell responsible for the attacks in Barcelona and Cambrils that left 14 dead and more than 100 injured were originally planning something much bigger involving Barcelona’s most emblematic tourist sites. The terrorists planned to inflict as much carnage as possible by driving vans packed with explosives into three of the city’s busiest tourist areas, according to a report in Spanish online newspaper El Español on Saturday. The newspaper cites police sources with information that one of the targets was Gaudi’s as yet unfinished masterpiece, the towering basilica of the Sagrada Familia.
www.thelocal.es/20170819/terrorist-cell-planned-to-attack-sagrada-familia-las-ramblas-and-barcelona-port

As I say, we will hopefully soon learn more about the causes of the Notre Dame fire. Let’s just say that maybe it was an accident. Perhaps unlikely, but let’s run with that scenario. But we have all the other attacks on churches to account for.

We do know from 1400 years of Islamic history that Christians and churches have both fared rather poorly indeed with millions of Christians killed and who knows how many Christian churches destroyed. With massive immigration and effectively open borders in many European countries, along with failed multiculturalism policies including cluelessness about the political ideology of Islam, all this is just a ticking time bomb.

When the horrific Christchurch shooting took place, the New Zealand leader and others around the world did all they could to express solidarity with the victims, including wearing head coverings and having Muslims pray in Parliament. One wonders if the favours will now be returned.

Will there be mass marches of concerned Muslims on the streets of Paris and other capital cities in Europe demanding an end to the violence against churches? Will Macron and other European leaders all start wearing Christian crosses in solidarity with the French Christians?

Will Muslims also wear crosses to show their support for their grieving Christian friends? Hmm, I won’t hold my breath on any of these things. But it does seem that some Muslims at least have already been rejoicing over the Notre Dame blaze, just as some Muslims danced in the streets after 9/11.
gellerreport.com/2019/04/muslims-laugh-notre-dame-inferno.html/?fbclid=IwAR2ZQMDCk0JQrzhaknOdxE4hKVLZjmDboZcmD6T9ngUt8j1rie9yAx-66Kg

Other commentary on all this is coming forth at a rapid rate. Let me close with just one such piece:

This is a disaster for Paris and for France, for French history, and for French Catholics. It is a grave loss for the history of Western civilization, and for future generations who, like me, will never see the cathedral’s glorious rose windows or the grandeur of her magnificent spires.

But first and foremost, it is a tragedy for the Catholic Church, whose members are already suffering in so many places. To many Catholics, it feels as if the Church is on fire in a sense already. And now we are watching it blaze. Though Notre Dame de Paris is a testament to world history, to art, to architecture, and to centuries of civilization, above all she is — was — a place of inestimable beauty dedicated to God. The cathedral’s Gothic arches pointed heavenward not for their own sake, not to glorify their creator, but to direct the eye to Him. It was a house of worship, a home for His Presence. That is the loss Catholics mourn this afternoon.

Watching this holy place slowly collapse at the start of Holy Week — which will culminate in the commemoration of Jesus’s passion, death, and resurrection — is of undeniable significance. Notre Dame has fallen, the way everything in the earthly city must. She will not rise from these ashes as she was. Catholics take comfort in the belief that our Church will stand firm.
www.nationalreview.com/corner/a-tragic-loss-for-the-church-and-the-world/

As Easter approaches, please keep the people of Paris in your prayers. Pray for both comfort for the grieving believers there, and for protection against any more such episodes. We live in very alarming times.

The post Notre Dame and the Death of Europe appeared first on CultureWatch.

Notre Dame and the Death of Europe