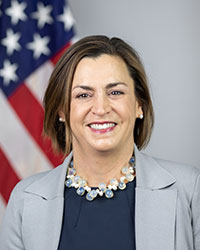 Her remarks were made at the Dec. 9 meeting of the president’s National Space-based Positioning, Navigation and Timing (PNT) Advisory Board.

The meeting was held shortly after Russia’s successful anti-satellite test and threat to “blind NATO and the U.S.” by shooting down all GPS satellites.

Durkovich’s remarks were made in the context of a larger national resilience message. She cited recent incidents such as Hurricane Ida, the Colonial Pipeline hack, the winter failure of the Texas electrical grid, and disrupted supply chains. She said everyone is responsible to ensure they, their systems and the nation are able to safely weather adverse events and bounce back better than before.

The interconnectedness of so many vital services such as electrical power and other vital systems like PNT make a holistic approach necessary. The administration is developing a set of resilience principles to support that, she said. It is also ensuring as funds go out to states and localities from the infrastructure bill that making American infrastructure more resilient to climate change and “all hazards” is a priority.

Because “positioning, navigation and timing is foundational to our life,” she said, “resilience is more important now than ever.” Disruptions could lead to “cascading effects.”

Durkovich cited the administration’s Space Priorities Framework as evidence of White House concern. Released this month, it says in part:

Executive Order 13905, “Strengthening National Resilience Through Responsible Use of Positioning, Navigation, and Timing Services,” among other things, calls on all users to avoid over-reliance on GPS. It also calls for the federal government to require PNT resilience to be considered when selecting contractors.

Space Policy Directive 7 “The United States Space-Based Positioning, Navigation, and Timing Policy” outlines a number of research and other efforts. It also says the nation will:

“Invest in domestic capabilities and support international activities to detect, mitigate, and increase resilience to harmful disruption or manipulation of GPS, and identify and implement, as appropriate, alternative sources of PNT for critical infrastructure, key resources, and mission-essential functions.”

Several board members asked about the Federal Communications Commission’s (FCC) order authorizing Ligado Networks to broadcast in frequencies adjacent to those used by GPS. She said the administration was concerned and both the National Economic Council and National Security Council were in discussion. Engagement with the FCC, though, may pend confirmation of a full board of commissioners.

One of the board members asking about the Ligado issue followed up with a comment that adjacent-band concerns pale in comparison to recent Russian threats to GPS satellites. Durkovich responded that there wasn’t much she could say on that topic in public except that it had the attention of the president and his senior advisors.

Durkovich was also asked about the administration’s commitment to execute the 2018 National Timing Resilience and Security Act. The law’s requirement to establish a terrestrial, wireless source of coordinated universal time to back up GPS signals by December 2020 was ignored by the Trump administration.

Her reply was to reaffirm her earlier statement that “assuring positioning, navigation and timing, and the economic and strategic benefits it brings to this nation, is a priority for this administration.”

Video of the entire advisory board meeting is available on YouTube. MS Durkovich’s remarks begin at approximately 1:37:00. A link to the video is also posted as part of the agenda on the board’s website.