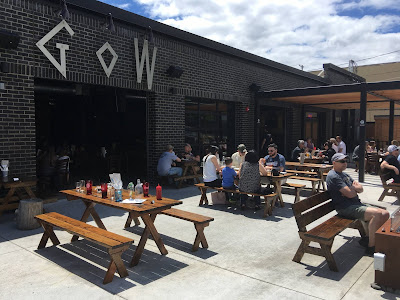 Grains of Wrath to Open in Former Side Bar Space

Grains of Wrath is coming to Portland. Naturally, this isn't the first place you're hearing about that. It was splashed across social media and various beer sites after the press release hit inboxes Wednesday. But there's more to the story than most realize.

As almost everyone knows, Grains of Wrath (GoW) has been operating in downtown Camas for about two years. The business there has been an unqualified success, attracting patrons from both sides of the river. It's packed during peak hours, often busy in between.

Brewmaster Mike Hunsaker established a solid reputation in Portland via his time at Fat Heads. Hunsaker is surely best-known for his IPAs, but he has extensive brewing chops. He's won a number of awards at GoW, including medals for his Vienna Lager at GABF in 2018 and 2019. Hunsaker's beers are good enough that people cross the bridge to enjoy them.

Wednesday's press release announced plans to open on North Williams. I assumed that meant they would be taking over the old 5th Quadrant space. That was based on the fact that GoW operates a highly successful pub business in Camas and would be replicating that model here.

In fact, GoW will occupy only the relatively small space that was previously Lompoc's Side Bar. The place. expected to open this spring, will comprise a brewery and 50 seats. It'll be a 21 and over establishment that features Hunsaker's beer, light food, liquor, wine and cider.

"The expansion is limited by design," co-owner and general manager Brendan Greenen told me via email. "We like the retail aspect of a taproom, but don't have a lot of interest in another restaurant unless it's the perfect storm of location and opportunity. We have a large restaurant as it is, and intend to keep that as our home base for now."

There's more to unpack. Greenen and partners, Shawn Parker and Brendan Ford, see a lot of great restaurants in the North Williams area. They don't really want or need to compete with those places. Instead, they feel like they can supplement the texture or the area with a focus on great beer, liquor and limited food.

"The 21+ focus is really just a factor of the tiny space," Greenen said. "What we've seen in our Camas location, especially during the summer with our large patio, is that kids get restless and want to get up and move around. In a large space like our brewpub, that’s generally not an issue. In a small space like in PDX, it would present multiple issues."

They aren't exactly sure what 'light food" means. Part of the problem, as they renovate the recently leased spaced, is figuring out where to put the food prep area. And what to offer in a limited menu.

"We're still kind of fleshing the menu ideas out," Greenen said. "We're looking at a couple of spots within the leased space to figure out where it would be best to place that part of our operation."

They're leaning toward a quality sausage/meat/small plate menu in which they would partner with  local purveyors to have quality product, yet a small menu. The reason they want food is they want to be able to offer liquor to customers, in addition to beer, wine and cider. Makes sense.

So what we'll have is a Grains of Wrath outpost in the old Side Bar space. They hope to launch the brewing part of the operation there by late summer. Until then, all of the beer will come from Camas. That hardly matters. These Hunsaker beers have fans. When GoW builds it, people will come.

Grains of Wrath to Open in Former Side Bar Space