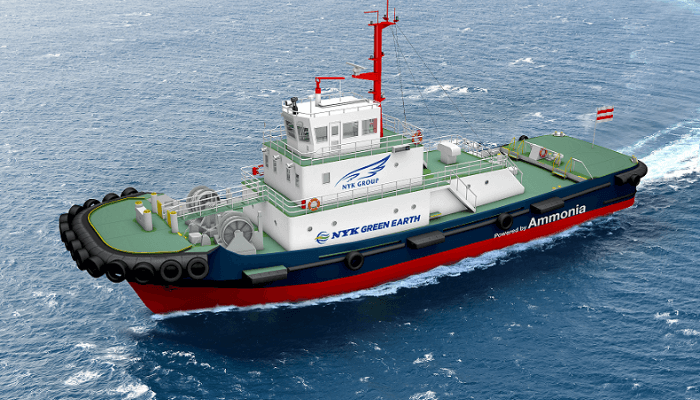 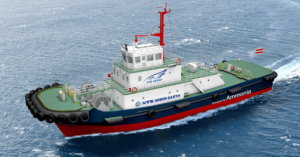 NYK has concluded a contract with Keihin Dock Co., Ltd., an NYK Group company, to modify a tugboat to ammonia-fuel specifications. Sakigake, a tugboat currently fueled by liquefied natural gas (LNG) and operated in Tokyo Bay by NYK Group company Shin-Nippon Kaiyosha Corporation will be converted to operate on ammonia fuel by a target completion year of 2024.

This initiative is part of the development of vessels equipped with a domestically produced ammonia-fueled engine, which was initiated in October 2021 by NYK and IHI Power Systems Co., Ltd. (IPS) as part of the Green Innovation Fund Project* of the New Energy and Industrial Technology Development Organization (NEDO).

Since carbon dioxide (CO2) is not emitted when ammonia is combusted, ammonia is viewed to have promise as a next-generation fuel that could mitigate shipping’s impact on global warming. In addition, it is said that zero emissions can be realized throughout the fuel life cycle by utilizing CO2-free hydrogen** as a raw material for ammonia.

By using ammonia as a fuel for ships, it will be possible to significantly reduce greenhouse gas (GHG) emissions during voyages. Therefore, NYK and IPS are proceeding with research and development aiming for early social implementation.

In the development process, there were various design challenges in using ammonia as fuel, but the two companies overcame these challenges without changing the size of the conventional tugboat and received Approval in Principle (AiP) from Nippon Kaiji Kyokai (ClassNK) in July 2022.

NYK will begin modification in fiscal 2023 with the aim of realizing demonstration operations in the port of Yokohama in fiscal 2024.

In addition, NYK has launch its new “NYK GREEN EARTH” brand to emphasize NYK’s ESG efforts to create new value initiatives for low carbon and decarbonization through green businesses such as the development of next-generation fuels, including ammonia and hydrogen. The NYK Group will encourage new value creation as a sustainable solution provider in order to strongly promote ESG management.