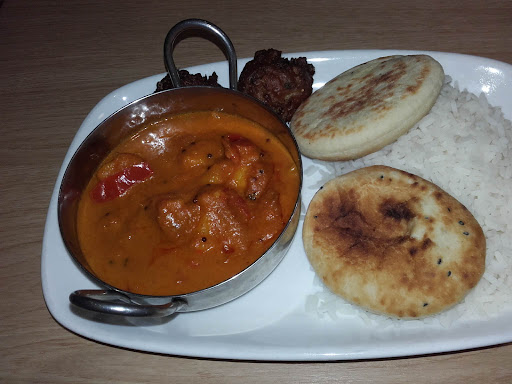 Travelling to the UK from Cyprus (continued)

I wrote in my last blog post about our complicated preparations for travelling to the UK this summer, with about ten days to do considerably more than is normally needed. Not that the pre-pandemic 'normal' applies any more. But as I said at the end of that post, it wasn’t until we boarded our mainly empty flight, late on a Thursday evening just over a month ago, that I finally started to allow myself to believe that we might see our family again.

I'm very thankful to live in an age of modern technology. Whatsapp, Facebook and Zoom have enabled us to stay in touch, to share photos, to see each other’s faces and hear each other’s voices. My brother instituted a fortnightly (now monthly) family Zoom and it’s been one of the highlights of the pandemic, as far as I’m concerned. Just half an hour or so catching up with news and trivia has made all the difference to my feeling of being isolated from my relatives for so long.

But it’s not the same as being together, and I hadn’t realised how much I had missed it until we were, at last, en route, and a little frisson of excitement started to rise in my chest. I was tired - our flight wasn’t until after my usual bedtime - and quite stressed; it had been a hectic week making all the arrangements necessary. I dozed once or twice, but can never really sleep on flights.
We arrived on time, and found a taxi to take us to the nearby Travelodge. Previous experiences with waiting for the shuttle bus had persuaded us that it was worth paying a few extra pounds for the comfort and convenience of a taxi when arriving at 1.30am.

Gatwick Travelodge is a familiar place, but we had never before booked two nights there. This was necessary for various reasons, including the lateness of our flight. We had decided to have a day to ourselves - to pick up our rental car about noon on the Friday, so we could take it easy after the substantial Travelodge ‘all you can eat’ breakfast.

Collecting the car was not stress-free. This is an example of British understatement. We had opted for a different rental company this time, as our usual preferred one was charging extortionate amounts. But we should have known that it wouldn’t be easy. We did eventually get the car (which was fine, thankfully) but we left feeling irritated, having had to leave a very large deposit with the company, who did not trust our excess insurance. It was not a good start to our break.

When we arrived at the nearby shopping centre where we had decided to eat lunch and make some necessary purchases, I felt oddly nervous on seeing so many people milling about, many of them not wearing masks, and with little observance of any social distancing. We had N95 masks, and while I prefer the more comfortable cloth ones, we wore the more protective ones as we had no wish to acquire the virus and potentially pass it on to our vulnerable relatives.

There are always a few things we buy in the UK, that we can’t easily find in Cyprus. Solid deodorant, for instance. It's quite pricey, but each one lasts over a year, and can be taken in hand luggage on a flight. I usually buy a selection of inexpensive birthday cards, too. Richard was looking for a new backpack, I was looking for some new sandals. And he always likes browsing shopping centres.
I had got beyond exhaustion into a kind of dazed auto-pilot, but we found lunch, and looked in shops, and then returned to the Travelodge. We had talked about finding a nice restaurant for our evening meal, but were so tired we decided to eat there and were pleasantly surprised at the choice and the quality, even if we had to wait rather longer than we would have liked for the meal to arrive. 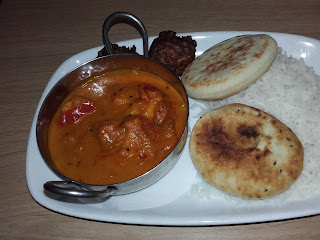 On Saturday we spent a very pleasant day with Richard's mother. Then to a nearby AirBnB, where the hostess had kindly agreed to take in our 'Day Two' PCR test packs, which had to be used on Sunday morning. That was a bit stressful - the instructions were not entirely clear, so we hoped we had taken suitable samples. Then, as we had not ordered courier-collection ones, we had to find a place to post them. We tracked down a priority mailbox, made a note of the tracking numbers, and photographed them going into the letter box - since it was Sunday, none of the Post Offices were open.*
We had lunch at a service station en route to our next destination, in the Midlands, which we reached at about 5pm. It was very good to see my father again after such a long time.

We stayed at a nearby Travelodge, and then spent the whole of Monday with my father and stepmother. One of my brothers came for the day, with his wife and her granddaughter, and there was also a brief visit from my nephew and his wife. It was a lovely family day and I tried to appreciate every moment.

On Tuesday we drove north again, and spent a couple of hours with my other brother and his wife. Then on to our last destination, the one I was looking forward to most: a whole week with our sons, daughter-in-law and grandchildren. Our younger son was staying with the family, having moved out of his last flat in the south. So we had all our descendants together, for the first time in eighteen months.

Spending time with the grandchildren was wonderful - we went with them to nearby parks, read them books, played board games, and chatted in ways that just aren’t possible when video chatting. We saw places they had talked about, so we can imagine them for ourselves. 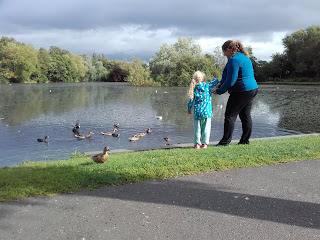 We relished every moment. Children change so rapidly during these early years, and they have such different, delightful personalities. 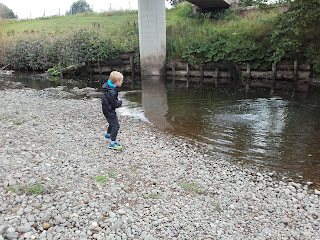 Richard had been talking about sailing with them, on our video calls, and both children were excited at the idea. Since we have no idea when they might manage to get to Cyprus, he decided to rent a boat for an afternoon at one of the lakes in the Lake District. We had lunch there together, then three of us went to find hot drinks and some peace to read, while Richard took our older son and grandchildren out for a couple of hours. The boat was was apparently very like the boats in the book 'Swallows and Amazons', which the children have enjoyed listening to more than once. 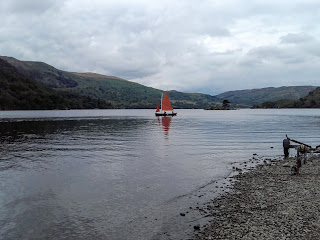 Since there wasn't room for all of us, we stayed for the week at a nearby AirBnB. It was a lovely place to stay, with a huge attic room, beautifully decorated with an ensuite bathroom, and some of the friendliest hosts we have met.
Knowing how short the time was, I tried to make the most of every minute.  I knew I would find it difficult to leave, and would have liked to stay longer. But we had decided that I would return to Cyprus with Richard rather than rely on public transport to get to the airport, or to make further visits to other relatives. Twelve days in the UK felt like a huge adventure after such a lengthy period when travel was impossible.  It was never going to be long enough for me anyway. I think, in the circumstances, it was both the right time to go, and the right length of time to stay.
So, on August 25th we drove to Newcastle Airport. Returning the rental car was, thankfully, straightforward, and the lady who dealt with us was a great deal more helpful and friendly than the guys at Gatwick. The airport is quite small, and many of the shops and eateries are still closed. but we found somewhere to eat lunch and bought sandwiches for the return flight.
While it always takes me several days to feel myself again after a flight to Cyprus - and it was still hot and humid on our return - I felt refreshed and rejuvenated. And it's so lovely to have seen where our older son and his family are now living; last time we visited them, they were in Scotland.
I have no idea when we will return to the UK, or see any of the family again, but it was a wonderful trip, appreciated all the more after the difficulties encountered in getting there. I'm hugely thankful to all who hosted us, and for every second we were able to spend with our loved ones.
*PS It took three days for our PCR tests to reach the destination and another day to be processed. We did eventually receive notification that they were negative, but by that time we had visited four different households (six if we include the AirBnBs), and been out and about in the community.  We can see the point of tests before flying, but when we no longer needed to isolate, a 'Day Two' test, with results on about Day Six, doesn't seem to have any useful purpose.

Travelling to the UK from Cyprus (continued)