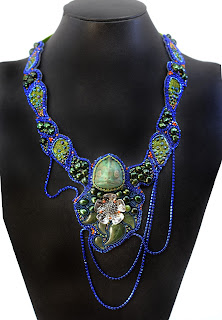 Ode to the Night Pond Necklace

If there ever was an introverted, shy necklace, this would be it.

Every time I take my camera out, it looks away. It looks sort of glum on pictures while in person it lights up with mysterious blue glow.

I don't feel like pictures today, it says. Stop it, it says.

In person it's a completely different story.  It's blue of the bluest kind. It's deep and so saturated, if it was candy, its sweetness would make your teeth ache while your mouth would melt  with joy at the same time.  It's green comes in waves. From the jade leaves to the grassy green  of its other elements, the green, like light on water, shifts.

It is a curious amalgamation of elements that never thought they would meet in person. Wayne Robbins is the man to mostly blame for this piece's existence. He created the charming fishy froggy dude,the foundation upon which the rest of the design was built. I fell hard for fishy froggy dude's enigmatic, Mona Lisa like smile and Wayne kindly enabled me by making a small army of them.

A good friend bestowed a large bag of vintage jade leaf cabochons on me. These are very old. Maybe a hundred years, maybe a little less. I am not sure. Initially I thought they were from France, but she said they are from Germany. Either way, these jade leaves have seen the better part of the 20th century and could they speak; they would have bittersweet tales to tell.

The Anna Bronze focal was a natural choice here. I wanted to portray a pondling, arising from his lair. Is he a fish? Is he a frog? Who knows. That's not exactly a water lily, but it's a good approximation and those jade leaves are not quite lily pads, but in this context they shall become lily pads.

The way I see it, the sun is going down. The gentle breeze plays with the reed and tangles with the  willow's coif. I can't see that far because I have been staring at beads for so long, my eyesight is not what it used to be, making the world in general a lot more mysterious and endearing at times than it has any right to be after the shit it pulled last year.

So here we are, the air smells green with the scent of fresh cut grass. The pond smells somewhat fishy, as any self respecting pond should without question, and we just sit here and exist for a while in the mysterious glow of the setting sun, the bastard who over saturates every scenery with her glorious golden light to the extent, that any attempt at catching it through a lens always ends up looking way too cheesy, way to kitschy, over the top.

You know the kind of sunset: unrepeatable and glorious and makes you feel very much alive for the sake of witnessing its glory, when you become nothing but the faculty to perceive its magnificent opulence, and if you try to arrest its passing, it will laugh at you and your phone, chiding you for ever  trying to arrest its passing, reminding you that some things ought to wash over you without you trying to catch them by their tail.

That's the kind of light I envisioned when I made this piece. And maybe that's why it refuses to behave for the camera. Of course it's not like that sunset in reality, nothing that magnificent about it. But it likes to hide its own, more human made and humbly glowing nature. 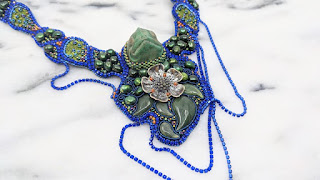 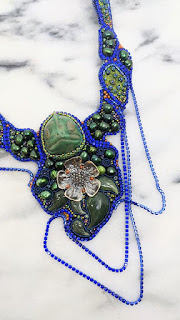 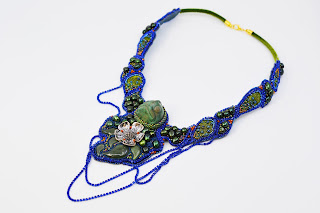 That's great, you might say. But what does this even look like on a hooman bean? Good question, wise beady peep. 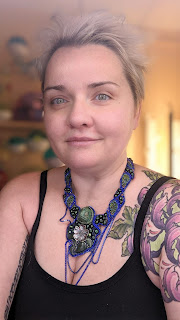 This is what it looks like on me. Very impromptu affair of a  picture. Observe the artiste in her natural habitat, no makeup, au naturale. Deer in headlights moment in all of its own glory.

Good thing I have friends in high places, since it's pandemicky  out there, and I haven't taken pictures on human models for a long time now. My multi talented artist friend, Dusty Paik is the queen of many things, one of them makeup of the stage kind. She is an accomplished performer and model as well, a costume designer too, and these are just the tip of the iceberg when it comes to Dusty. She is a woman blessed with great many talents indeed. She designed this look for the project: 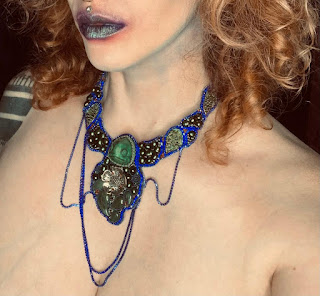 All the colors of the necklace make an appearance on the fishy froggy makeup. I love what she has done with her lips to accentuate the fishy- froggy, pescaphibian feel of the piece. 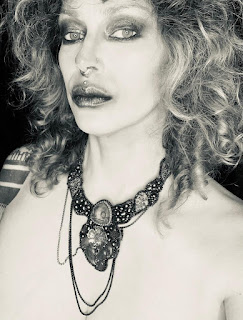 I think her pictures are the bee's knees. She brings "fierce" to this strange party of "enchanted" and "whimsical". 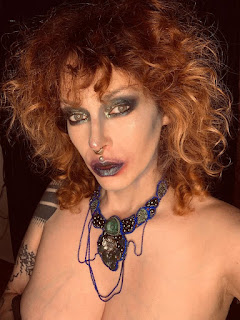 So yeah, this is about how this necklace fits, its utmost usefulness duly demonstrated.

I hope this blog post will entice You, Dear Reader to come and join me in the merry  necklace making of this fine piece at the end of May. The project is being offered as a one day class through Socialbeadia. While the May 28th session is sold out, there is room for you to join me on the 29th or the 30th. Right here: https://www.socialbeadia.com/kinga-nichols

Thank you for your kind consideration.

Ode to the Night Pond Necklace