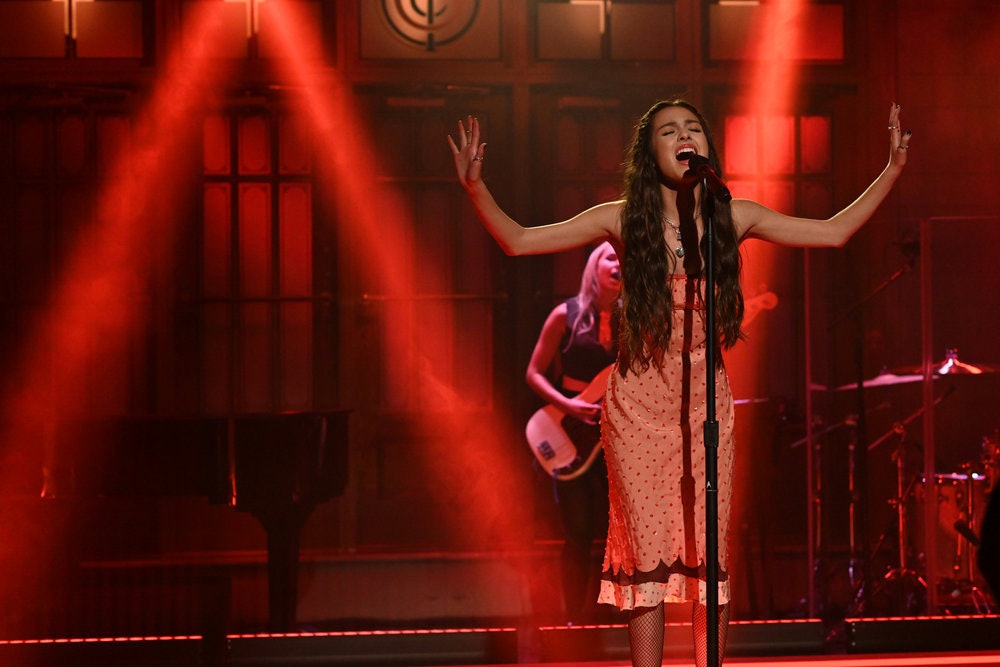 Olivia Rodrigo Shared All Her Emotions After Her ‘SNL’ Performance

Having taken over the charts, Olivia Rodrigo brought her magic to Saturday Night Live on May 15. It was a huge moment for the 18-year-old singer-actor, and she revealed afterward that she was feeling all the feels, including intense nerves. In an Instagram story post-show, Rodrigo summed up her SNL performance, calling it “the most nerve wracking/ emotional/ happy experience” of her life.

The High School Musical: The Musical: The Series star was announced as the episode’s musical guest on May 3, a development she made clear was a dream come true. “Pinch me! im so stoked!” she tweeted at the time. When her big moment finally came, Rodrigo showed her range, performing her angsty heartbreak anthem “Drivers License,” and then following it up with her frenetic new hit “Good 4 U.” By the end of the episode, host Keegan-Michael Key was bowing to her and fans were calling her a “legend” and an “icon” on social media.

Rodrigo also tweeted about her SNL appearance the day after her performance, again highlighting how special it was for her to be on the sketch comedy show. “Such a huge honor,” she wrote in response to an SNL tweet. “Thank u for having me!!!” Later returning to Instagram to share some photos, she captioned the carousel, “SNL was f*cking insane!!! def one of the coolest experiences of my life. huge thanks to all the ppl at the show for being so wonderful and welcoming. also @keeganmichaelkey is an absolute genius.”

While Saturday’s performance marked Rodrigo’s SNL debut, it wasn’t the show’s first embrace of her. In February, and on her 18th birthday no less, there was an entire sketch devoted to “Drivers License” and its widespread appeal. Host Regé-Jean Page and a group of “tough guys” in a pool hall (including Kate McKinnon as an old man) got emotional as they listened to the song and dissected its lyrics. They even went into a full-on sing-a-long, playing the bridge twice because it hit that hard.

As fitting as it was for the singer to finally perform her breakout hit on the show, the day as a whole brought a lot of good vibes. Ahead of the episode, Stranger Things star Millie Bobby Brown proved she was an Olivia Rodrigo stan by dancing and lip-syncing to “Good 4 U” and sharing the enthusiastic video on her Instagram story, writing, “Thank you @oliviarodrigo you are a legend and I love you. okay bye. thanks again.” Taking it a step further, she shared a screenshot of a DM she’d sent to Rodrigo — “I love you. period.” — and some words for her followers, “okay. no. that’s it fr now.” When the musician later posted Brown’s video on her own Instagram story with the message, “OMG I LOVE YOUU,” the Enola Holmes star gave fans another update, showing the post and writing, “MY DREAM CAME TRUE.”

With Sour dropping on May 21, expect Rodrigo, her music, and her stans to pop up in more places.

Olivia Rodrigo Shared All Her Emotions After Her ‘SNL’ Performance