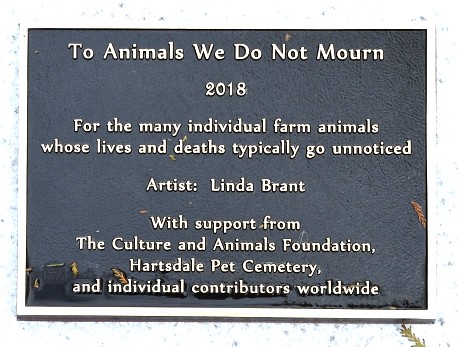 In the Hartsdale, New York Pet Cemetery, there is now a bronze and granite memorial unlike the hundreds of ‘monuments’ – large and small – dedicated to the animals who once had a loving human companion. The new monument, created through the compassion and determination of a Florida Artist/Professor, is placed in honor of the thousands of animals who never had a ‘home’ but who were bred and killed for food. The unique Monument to Animals We Do Not Mourn was created by Artist Linda Brant, and represents a four-year saga of compassion, creativity, and fund-raising. The resulting monument was un-veiled recently in Hartsdale. I recently had the honor to sit and interview this special Artist/Teacher at her home in Orlando, Florida.

What were your motivations for creating this unique monument?
The idea came to me while I was studying the history of animal gravestones. In my readings, I frequently encountered references to the Hartsdale Pet Cemetery in New York, and realized there was no monument specifically for ‘farmed animals’ there. At the time, I was putting together a photo essay for Margo DeMello’s book, Mourning Animals. Part IV of the book is called “Animals We Do Not Mourn.” I found the phrase compelling, which led to the idea of creating a monument dedicated to Animals We Do Not Mourn.

How did Hartsdale receive your idea?
When the idea was coming together, I had not yet visited Hartsdale. I contacted them by email and asked if they would consider having a monument for farmed animals in the cemetery. They were very receptive to the idea, and encouraged me to visit. I did, and we secured a space for the monument.

You’ve labeled your monument an “anti-monument.” Can you discuss why?
Anti-monuments differ from traditional public monuments in important ways. While traditional monuments are typically bronze or stone structures displayed to commemorate a culturally significant individual or event, anti-monuments are for under-represented groups – often located in atypical spaces. Many of them invite public interaction. The Monument To Animals We Do Not Mourn is anti-monumental in that it stands for a non-dominant group – in this case ‘farmed animals.’ Placed in the company of thousands of ‘companion animal’ graves, the new monument serves as an historical document, marking the atrocities committed against countless un-mourned animals. 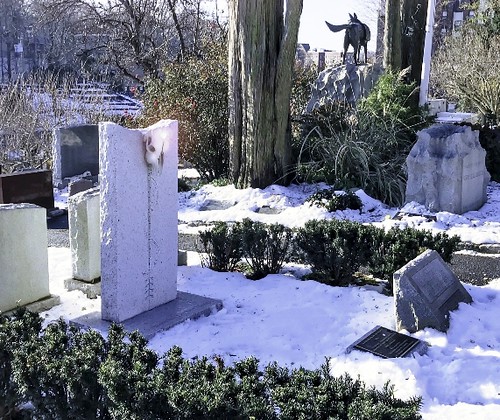 You also call your new monument “inter-active.” How is it “inter-active?”
The new Monument encourages visitors to leave a stone at the base of the monument if they support its message. As the stones accumulate over time, I will collect them and use them to make another monument for unmourned animals. In sum, the Monument to Animals We Do Not Mourn is anti-monumental in terms of its content, location, interactivity, and function.

What do you consider to be the differences between animal pets and those we “do not mourn”?
Most companion animals have a long history of close contact with human beings, while many unmourned animals (such as wild animals) have not. Farmed animals, bred for human consumption, represent a special category in that they have been domesticated for some time, but their lives are still not valued.

Why do you think there is still that dis-connect between the species?
In terms of any animal’s life, I see no difference between pet animals and other animals. Each animal is worthy of a natural, peaceful life. It is the presence or absence of a human attachment to the animal that seals its fate. I don’t understand how a person can love their dog or cat and then eat a steak or a chicken sandwich for dinner. I think the dis-connect persists because of the ‘invisibility’ of animal suffering. With slaughterhouses in remote locations, inaccessible to the public, it is easy for people to deny the horror of animal suffering and the brutality of their deaths.

What other inspirations did you find in creating your “anti-monument”?
Walking through pet cemeteries and seeing the tributes to beloved ‘companion animals’ was tremendously inspiring to me. We put so much energy and effort into our relationships with our companion animals, while forgetting so many others. The Monument To Animals We Do Not Mourn is a response to that inconsistency.

You received special grants for your project. Can you express how they impacted your creation?
When I learned how passionately Tom Regan (cultureandanimals.org) felt about my project, I was completely humbled and honored. Knowing that Tom understood and appreciated the message of the monument helped me stay the course when I encountered challenges. The project took four years to finish; there was no way I was going to give up. Tom expressed his views about animals with special clarity, and his pioneering role in the animal rights movement is undisputed. His enthusiasm for my project is validation of its value and means a lot to me.

What would you call the biggest challenge you faced with this project?
Fundraising, designing, manufacturing, publicity, you name it. There were many problems to solve, and many delays. I underestimated how much time it would take to make the piece, and the many delays were hard to endure. When projects are delayed, it is easy to lose momentum. I lost and re-gained momentum many times over the four years that it took to complete the project.

The monument is quite beautiful; can you talk about the design process?
The design had to be approached with special sensitivity as the monument was going to be placed in a pet cemetery where people go to grieve their companion animals. Moreover, the monument could not tower over the existing graves. The first thing you see when you look at the monument is the cast bronze cattle skull with the crystal in the position of the third eye. Since the monument faces due west, rays of the sun shine through the crystal in the early morning. The crystal came from the Twin Creeks crystal mine in Arkansas, and gem-cutter Doug Augsburger carved additional facets into the crystal to make it reflect more rays of the sun. The talented people at BronzArt Foundry in Sarasota, Florida cast the skull, along with positioning the third eye. The crystal is significant. When cattle are slaughtered, they are shot between the eyes, leaving a hole in the skull. The site of this injury corresponds with that of the metaphorical third eye, making the crystal function as a symbol, transforming the place of pain into a call for compassion. 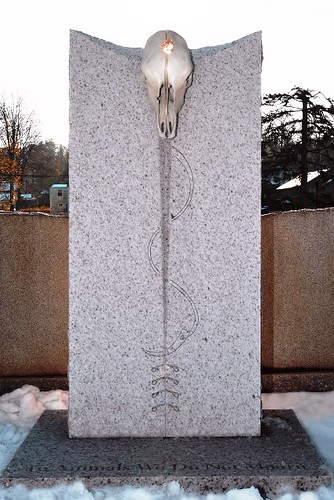 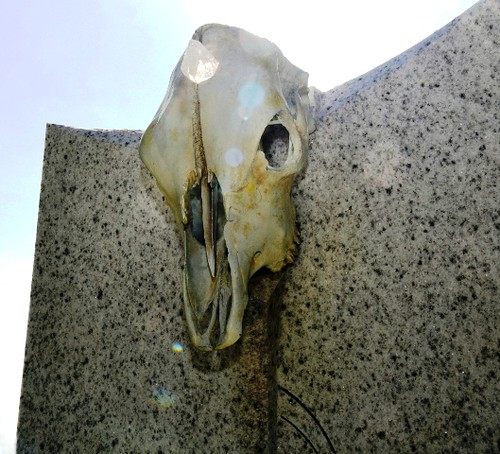 Your materials represent permanence. Can you speak to that?
The monument is designed to be visually simple yet challenging. The permanence of the materials (granite, bronze, and crystal) stands in contrast to our “throw-away” society and the commonly held view that the lives of certain types of animals are disposable. The monument stands 55 inches high, which is the height of a young steer at the time of slaughter.

Can you describe the unveiling? It must have been an emotional experience.
Yes, it was. I had tears in my eyes when I rehearsed my statement prior to the unveiling. I was more composed at the actual event, but still there was that sense of unreality about the day. I’m so happy to have made this piece. Since Hartsdale Pet Cemetery is on the National List of Historic Places, I feel confident that the monument will be there for a long time. My dream is that 100 years from now, someone will stumble upon the monument and say, “Wow, did they really breed livestock for food back then? Horrible!” 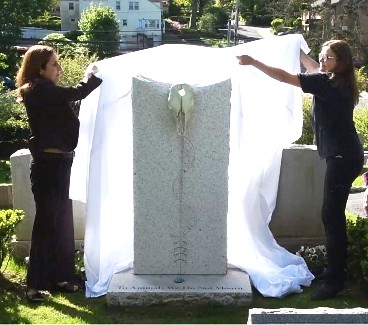 Josh Garrick is the Florida Arts Editor for Wandering Educators