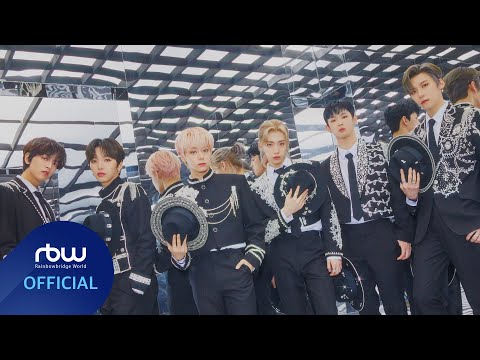 Oneus Showcase Their Skills and Subvert Reality in “Black Mirror”

Oneus have always had a flair for showmanship. From the allusions to Norse mythology in their debut MV “Valkyrie” to the bombast of break-out hit “No diggity”, the six boys from RBW Entertainment match their sister group Mamamoo in skill and style.

The smooth ad-libs and sparkling synths echo Michael Jackson’s sonic signature – a homage that also shapes the MV’s stellar choreography. From the razor-sharp formations to the members’ bejewelled suits, “Black Mirror” is pure performance. Oneus keep things classy in outfits accented in silver and gold, as they put their own spin on MJ’s iconic dance moves.

K-pop has become synonymous with high-concept videos and sprawling storylines. In this comeback, Oneus discard narrative structure in favour of a dance-focused video that is no less intriguing for its apparent simplicity. On the surface, “Black Mirror” is a shot by shot showcase of the title track’s choreography. But through its clever use of costumes, set design and a touch of CGI magic, the MV deconstructs K-pop’s kaleidoscopic visuals to explore their purpose.

In the opening scene, Xion stands surrounded by back-up dancers, their formation accentuated by a sartorial nod to Michael Jackson’s trademark white gloves. But just a few seconds in, the image shivers and refracts, morphing into an echo of the original shot, with some sly tweaks. Xion’s costume changes. The monochrome scene is embellished with a few pops of colour. And MV director Hong Wonki of Zanybros has just shaken up our faith in the reality of what we see on screen.

This subversion of expectation continues as the members dance on sets that blur into one another to create an ever-changing background of light and colour. In one scene the six members of Oneus are doubled, and dance in different rooms, facing each other through an invisible mirror. During another, the set slides past the screen, as a holographic blue wall separates one moment from the next.

The sets themselves are designed to bend the boundaries of reality. One has a reflective floor, and Oneus dance in sync with their shadows. Another is walled in mirrors, refracting the choreography into infinity. Yet another backdrop is a pure green screen swirl of marbled colours. Everything is in a constant state of flux, and the MV leans into this hyper-reality via CGI flourishes.

When the beat drops halfway through the first chorus, Seoho’s silhouette is refracted into black and white shards. As the second verse begins, the members form a screen with their hands, and the camera zooms through the gap between Seoho’s fingers to reveal the next scene. In this way, “Black Mirror” is a high-tech reimagining of a straightforward dance video. The use of CGI allows the sets to overlay each other, as the members’ costumes shift in sync. Rather than adjusting the camera angle to capture the next move, a little digital magic takes us there. The twist is that we’re made aware that it’s happening at all.

K-pop music videos have always fused an array of fashion statements and sets. But by glitching Oneus between costumes and emphasizing scene transitions, “Black Mirror” prevents its audience from getting swept up in the narrative. Instead we’re one step removed, waiting for things to change again. This stylistic choice underscores the fact that we’re watching a performance.

“Black Mirror” takes its title from the dystopian drama of the same name. The song’s lyrics juxtapose a sharp social critique of our digitized reality with an urgent desire to connect. As the chorus drops, Ravn rallies listeners to “break away from restraints”, before following with an invitation to “break into my world”.

The idol-fan relationship has always been a push-pull balance of careful distance shot through with moments of intimacy. This is ever more true as the pandemic reshapes our world, shifting concerts online and making social media the backbone of the K-pop fandom. Lyrically, “Black Mirror” is wary of the way we have become hooked on technology, while simultaneously reaching out to an audience that can only listen online.

Leave your worries for tomorrow

Leave your phone off a while

Us in the mirror

Just the two of us in this maze

The paradox inherent in the song’s lyrics, combined with the MV’s creative combination of staging and CGI, suggests that the screen through which we view the video is the mirror. During the final chorus, Oneus appear in monochrome, dancing on a stage surrounded by spotlights. The minimalism of the scene highlights the song’s last burst of euphoric energy, suggesting that the performance itself is the concept.

In a digital world that never shuts down, we’re always on. K-pop’s surreal visuals and genre-shifting sound align to create an audio-visual alternate reality, and the lyrical allusions to anxiety in “Black Mirror” echo the way fans turn to music as a source of hope and comfort.

The stage Oneus dance on is shrouded in shadow, but their audience exists on the other side of the screen. During the refrain, the members urge listeners to focus on them, and as we hear their song, Oneus’ invitation is answered. In this way, “Black Mirror” conceptualises the way fans mirror artists, creating a relationship that forms a mutual source of strength.

The MV fuses choreography, fashion and hyperreal visuals to not only demonstrate the members’ charisma and skill – but pinpoint the purpose of their performance. Oneus might be on the other side of the glass, but through music, they reflect their fans’ dreams and fears to forge a connection.

Oneus Showcase Their Skills and Subvert Reality in “Black Mirror”