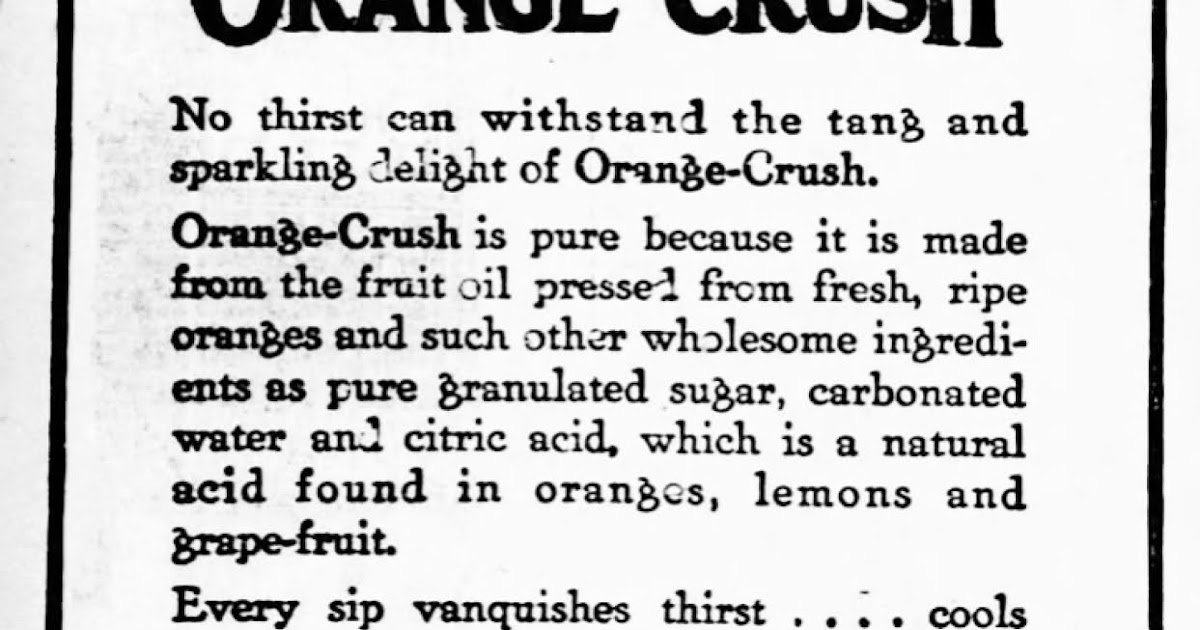 For about 50 years, the world-famous soft drink Orange-Crush was bottled in Chemung County. In 1915, a Californian chemist named Neil C. Ward developed a unique formula for the orange drink. A year later, he partnered with Clayton J. Howel and they created the Orange Crush Company. By 1924, there were nearly 1,200 bottlers of Orange-Crush throughout the United States and Canada. The Gardner Bottling Co. located at 226 William Street in Elmira began bottling the carbonated citrus beverage around 1919.

By the time Orange-Crush was being bottled in Elmira, the drink was already widely popular. The Orange Crush Company contracted with Norman Rockwell in the early 1920s to create 12 different paintings to use in advertisements for their three flavors of Crush – Orange, Lemon, and Lime. Rockwell was paid $300 (about $4,000 today) for each work which appeared in a variety of magazines including Collier’s, The Youth’s Companion, Life, The Literary Digest, and The Christian Herald.

What made Orange-Crush different from other orange flavored soft drinks was that it was made with real oranges. At first, it was just oil from the peels that was added to enhance the orange flavor, but later actual pulp was added to the lightly fizzy drink. In 1933, the manufacturer claimed that each bottle contained the equivalent of two oranges in nourishment.

In 1922, the Elmira bottling operation moved to 207 Sullivan Street and a year after that Louis Rubin began running the business under the name the Orange Crush Bottling Company. Around that time, the specially designed and patented “crinkly” bottle was introduced. Not only did the bottle somehow ensure “the purity, quality and deliciousness which have made the ‘Crushes’ the largest selling fruit-flavored drinks in the world,” it also helped customers easily find “genuine Crushes” in stores.

The Orange Crush Bottling Company relocated again around 1926 to the corner of Sheridan Avenue and 11th Street in Elmira Heights. By then, the company was bottling 12 different soft drinks including Orange-, Lemon-, and Lime-Crush, and Bob-O-Link Ginger Ale. When the prohibition on the production and sale of beer came to an end in 1933 (you can read all about that by clicking here), the bottling company began distributing Wehle ale, porter, and lager as well.

Sometime in the early 1960s, the Pepsi-Cola Elmira Bottling Company, Inc. took over the bottling of Orange-Crush locally. A short time later, the drink stopped being bottled in Elmira. Changes were also taking place at that time with the Orange Crush brand itself, which was purchased by Charles E. Hires, Co. in 1962. Proctor & Gamble bought the brand in 1980 and then sold it to Cadbury Schweppes in 1989. Today, Crush is owned by Keurig Dr Pepper and the fruity soft drinks are still available in local stores.