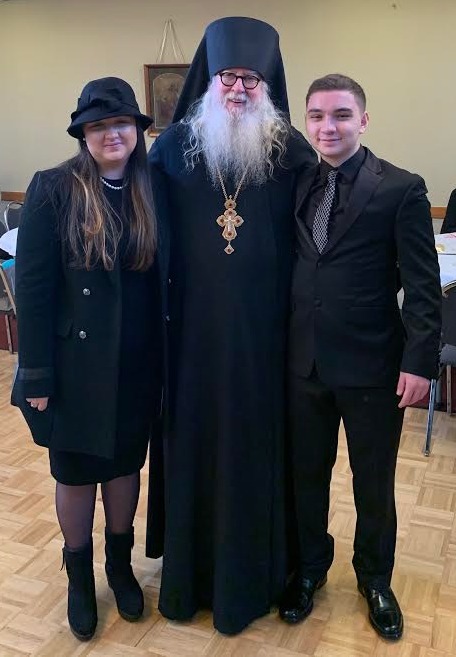 Abbot Tryphon, together with Elizebeth and Jonathan, the children of the recently reposed handmaid of God, Dorena.

When parishes are forced to close, it is not just because the children have moved away, and the old folks have died off. The problem is much greater than this. With increased numbers of immigrants joining parishes, often with the expressed desire to preserve their Russian identity, we can easily fall prey to believing our churches are on solid ground and will thrive into the next generations. In our collective joy at seeing our churches packed for Sunday Liturgies, we forget about previous influxes of immigrants, whose children, upon growing into adulthood, became so Americanized that they saw the Orthodox Faith as relevant only for their parents and grandparents, but meaningless to themselves.

The remedy, I believe, in forestalling another great exodus of our youth, is to wage a concerted effort to help our youth embrace Orthodoxy as their own. This means they must be able to understand the services, and since they are unlikely to learn Church Slavonic or liturgical Greek, we must admit that it is time to serve in English. The Ancient Church saw the language of the people as the vehicle for teaching the faith and passing Orthodoxy on to the next generations. Saints Cyril and Methodius helped to Slavic people receive Orthodoxy by translating the services into a language the people understood. Thus the Greek language did not remain the liturgical language of the newly illumined people of the Slavic lands.

I believe Church Slavonic has its place, for as a common language, it can be a point of unity, especially when used during joint services among Slavic peoples from different countries. Church Slavonic, as well as Liturgical Greek, are both lovely languages and have their place in the life of the Church. However, most laypeople do not understand these languages (beyond the parts that are used during each service), should be a wake-up call. If the changeable parts of the service are not understood by life-long Orthodox faithful, what does this mean for our children, and for visitors who might be looking into Orthodoxy? The romantic attachment to an ancient language is just not sufficient if we want the Faith to be delivered to both the heart and the mind, and become the mainstay of our life. The Roman Catholics discovered this truth when they dumped Latin as the normal language for Mass, in favor of the vernacular, and the move has worked very well in those places where the Mass is served with the dignity and tradition of the ancient Western Rite.

The early missionaries knew the importance of teaching the faith so as to accommodate the local population and allow newly converted people to really know the Orthodox Faith. Just as was the case when Saints Cyril and Methodius brought Orthodoxy to the people of Kievan Rus, our children must be able to understand the services and be taught the faith. Our children must understand why we do the things we do, why we fast, and why we worship the way we have worshiped for almost two thousand years. If these changes are not implemented by the local parishes, our youth will see Orthodoxy as nothing more than a quaint religion of a bygone age, meaningless to their own lives as modern Americans, and they will depart from the faith.

Since a priest is allowed to celebrate only one Liturgy per day, the introduction of English Liturgies could be gradually introduced, with one Sunday given over to English, and the second Sunday to Church Slavonic or Greek. Another option, in the beginning, might be to balance the service by using both English and Slavonic or Greek in equal amounts.

With love in Christ,
Abbot Tryphon

The post Our Children appeared first on Orthodox Christian Laity.