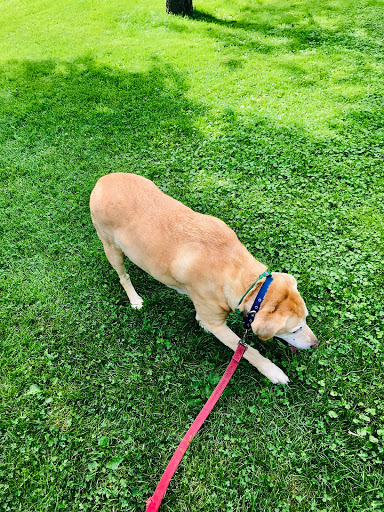 Walter and the chicken wing 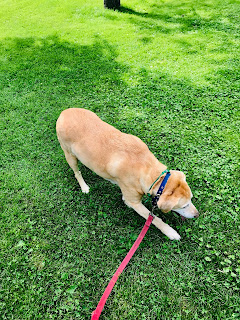 If you're not familiar with this blog or the characters in it, this is Walter. I've written a lot about this good boy: how he's better than my ex, our "how we met" story, and even that time I called him an asshole. He's one of the lights in my life and sometimes just looking at him brings me to tears because I love him so much. Although right at this moment, we're both on the porch- I'm on the couch clickety clacking away here, he's on the floor - and he's farting with such horrendous gale force that the tears in my eyes are because they are on fire.

So. This is my dog. We walk just about every day. During the week we head out at the asscrack of dawn, but on the weekends we get out later...before the heat sets in but after the sun has come up. This picture was taken on a Saturday. I slept in a tiny bit, had some coffee, made myself go to the bathroom not once but three times (dude I have actually wet my pants while walking him, and one particularly awful time almost did more than that)(I wrote about the latter one but never published it because who needs to read about it??).

I call our walks "Walter's Choice" because think about this: dogs are so amazing and we love them, but what a life! As my son Henry has said, imagine being absolutely dependent on someone else for the simplest of things in life: water, food, exercise. Dogs really don't have much say in anything that impacts their lives so, when I walk this boy I let him choose our route.

There are many different passages we take, this city we have landed in is wonderful for a myriad of reasons and the sidewalks/trails are one of them. That morning's journey took us to a local park. It's a sprawling chunk of land which boasts a golf course, a few ponds, several picnic shelters and a playground where my very own babies used to frolic.

Walter loves this place mainly because of the excellent selection of tall grass. He is half cow, I believe, and spends several minutes on each walk eating it. Depending on the time and my mood, I either stand there and let him indulge while swinging my arm to get steps 😂 or else I tell him that we have perfectly good grass at home and mommy has to get to work.

On the weekends, we have nothin' but time so I let him go to town. Eventually we got going, though, and headed to Walter's second favorite part of the Park Experience. Just beyond the large picnic shelter, there's a shaded and cool grassy area. Once upon a time, Walter found an abandoned chicken wing there, nestled in the grass like a greasy baby Moses in a basket.

He ate the wing before I could get it from him. That was a while ago, so no harm done. Besides, he's a lab. I'm convinced he could eat a bag of rusty nails and *maybe* get a little extra gassy and that's it.

But now, Walter pulls hard on the leash to explore this once-bountiful patch of grass. He knows that at one point in the past, it was awesome and he found something wonderful there.

It makes me smile because here is this magnificent creature who is blessed with a brain the size of a smallish peach and he remembers that ONE time this place made him feel good. That ONE time he happened upon something delicious and satisfying.

Oh my sweet dumb doggo I think to myself.

Except, wait. Who am I to stand there and be all superior and big-brained while Walter forages for something good in the grass? Don't I do the exact same thing? Don't we all?

True, maybe it's more than a chicken wing we're seeking but the more I think about it, the more I can relate with my old dog and his peachy brain.

I do the same damn thing. Only instead of a cool swath of lawn, I sniff around the places where I once found my version of the chicken wing.

Whether it's the texts from a tired old booty call or a bunch of episodes of Sex and the City that I've seen dozens of times, I go back to the places (and people) who once made me feel good. It's why I will forever be a sucker for a linen tunic and European clogs and poncho sweaters and tall overgrown frat boys with nice big hands and fidelity difficulties. It's why, decades after countless nights of yammering with other drunk 20-somethings in the ladies room, I still yearn for a night out at Gluek's Bar in downtown Minneapolis.

Because at one time or another, each of those things brought me some joy. A bit of happiness. Comfort, laughter, maybe an orgasm or two (that would be the frat boy, you guys, not the poncho sweaters).

Walter and the chicken wing