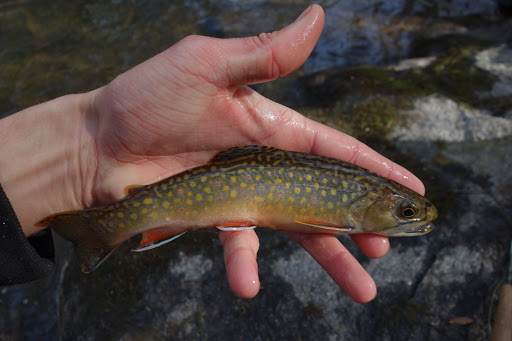 Winter Brookies on The Dangle

Whether fishing dries, wets, nymphs, or streamers for brook trout in the winter, I nearly always default to the dangle. It seems counter-intuitive, a dangled fly is far from subtle, and in many wintertime scenarios subtlety is preferred. But brook trout are not demanding. In fact, a dangled fly three feet above one's head seems to grab its attention better than a dead drifted fly six inches above its head. Strike detection is also aided. Wild brook trout in CT are generally small, and full of piss and vinegar as they are when the water is 50 degrees they are sluggish when it's below 40. Small and slow is not a good combo for feeling or seeing a take. Tight-lining isn't always an option in tight quarters and a rod held high may send fish running. It works on mid-sized streams, but in CT these are dominated by brown trout anyway. The same can be said for dead drifting with a slack line. It works circumstantially. Dangling flies, though, can get a lot done on small brook trout streams. On an outing in which Alan and I fished a quite small stream with some long, flat, curved glides and lots of overhanging brush, I was able to drop flies at my feet and dump line, maneuvering the rod tip to position the dangling fly in possible lies, hang it there for a few moments, then work it down to the next. By the end of that the fly was 30 feet downstream from me, around a bend, and beyond four small trees draped completely across the stream. Read the current, learn good line management, choose a fly with the right sink rate for the moment, and the sky is the limit with a dangled fly on a small stream.

I put the dangled fly to good use on Friday in a high gradient stream that I hadn't visited in a while. The first fish actually took a twitched bomber cast upstream, but, believe it or not, I came back at the end and caught the same brookie on the same presentation that caught every other fish, a dangled Ausable Ugly.

The starting point on this stream is very near the lowest point, so there are two options, hop my way upstream and back down, or start as far up as I want and work down. I invariably choose to hop up and down. It gives me two shots at fish like the one I caught twice. Even an above average sized brookie is bound by the rules of low-nutrient freestone stream life: they must eat a lot of what enters their field of view. They can't afford to shut off for hours on end. So, if you miss or loose a nice brookie that you really want to get, give yourself the chance to come back to it, and expect it to have adjusted position slightly closer to cover. 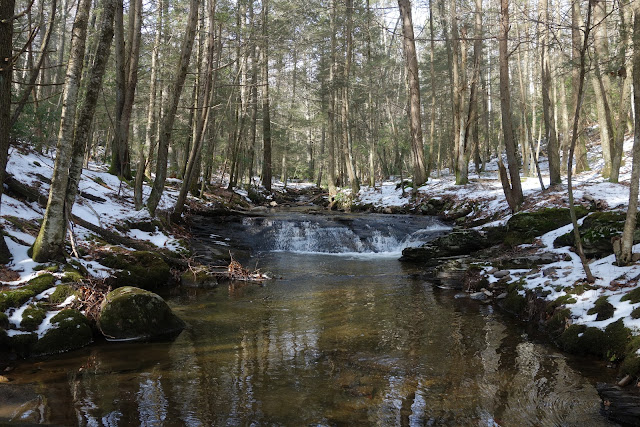 I sneaked around a good looking pool, taking care not to crack any branches or knock over any rocks, getting to the stream edge well above where I wanted to fish from. I did have to make sure I wasn't in  sight of brookies in holding water in immediately upstream while doing so. I made short roll or bow and arrow casts, but the heart of the presentation was in line management and rod motions after the cast was made. Reading the current for ways to use it to manipulate my line was also paramount. 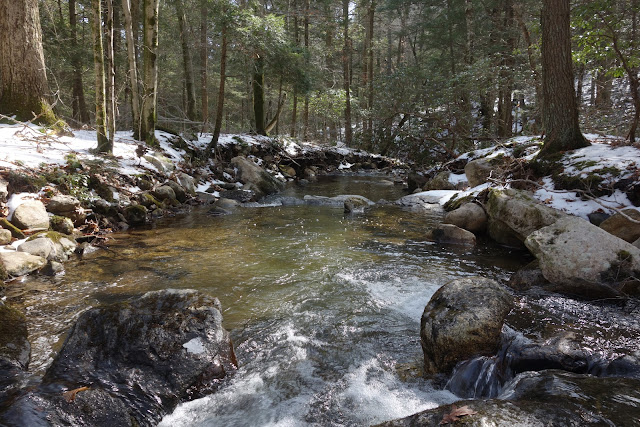 The takes were subtle but far more easily detected than they would have been had I been fishing from a downstream position. It feel pressure when making a twitch or coming tight after a drop-back. Or, the fish would follow the fly upstream and I would watch it eat. 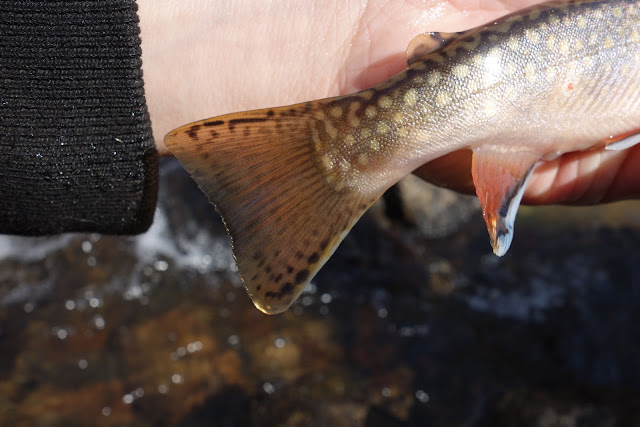 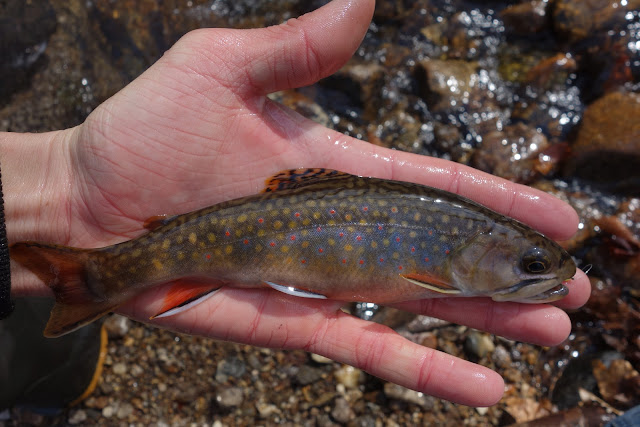 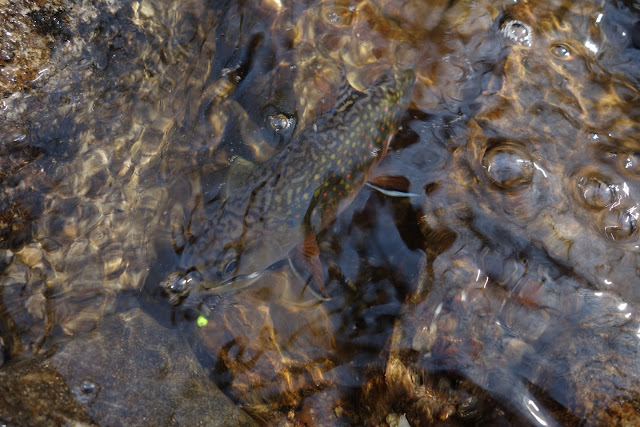 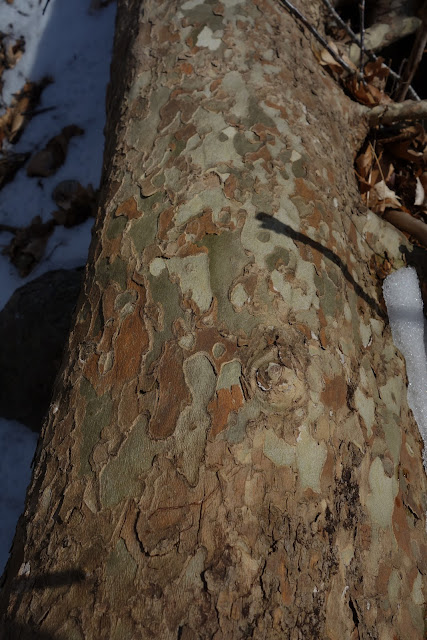 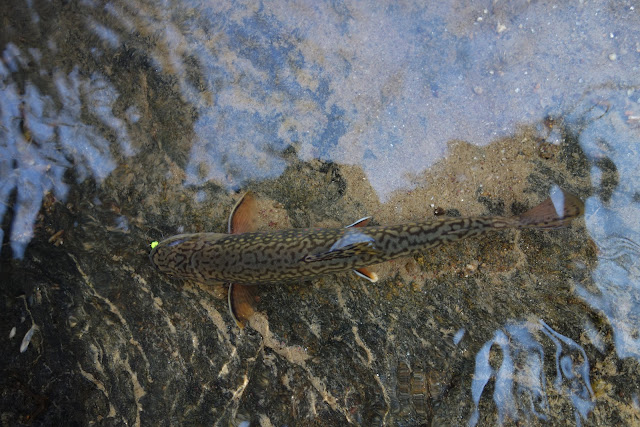 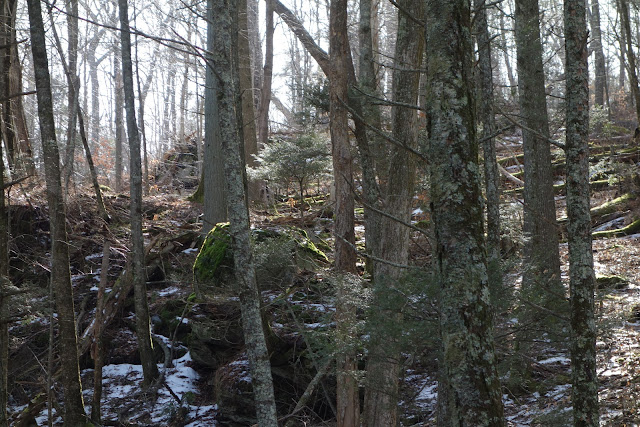 The water is cold. The behavioral drift is minimal. The fish are hesitant to move. The quarters are tight. The casting is tricky. These are the times when the dangled fly makes the day.
Source: flyfishingcts

Winter Brookies on The Dangle