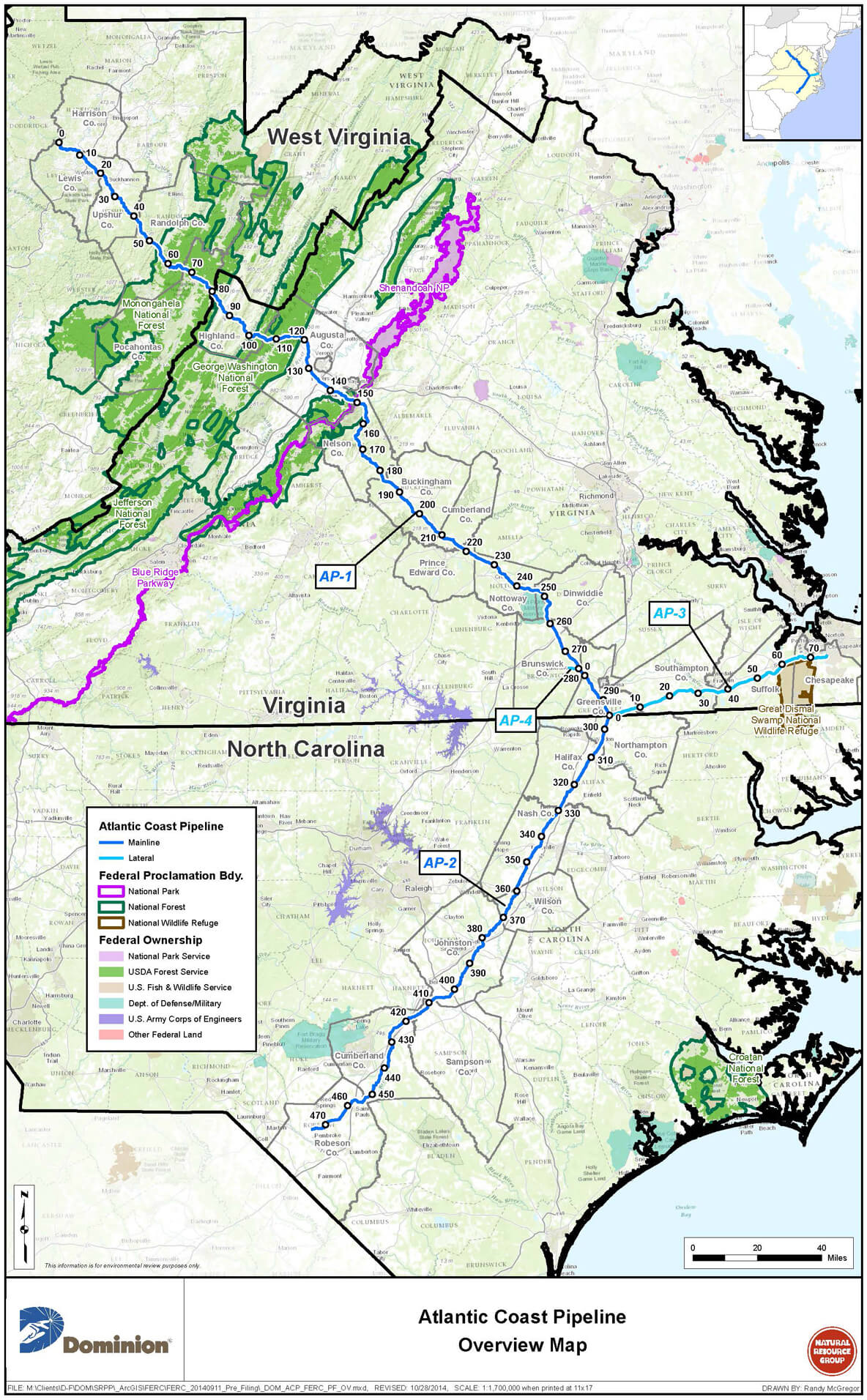 The U.S. Supreme Court on Monday ruled that the controversial Atlantic Coast Pipeline, a 600-mile natural gas pipeline being built by utility heavyweights Dominion Energy and Duke Energy, can cross beneath the Appalachian Trail in Virginia’s George Washington National Forest.

But the 7-2 decision, penned by Justice Clarence Thomas with Justices Sonia Sotomayor and Elena Kagan dissenting, lifts one barrier to the continuation of the $8 billion project while leaving in place eight others that the pipeline must surmount before moving forward.

The present challenge overturns the Richmond-based 4th Circuit Court of Appeals’ December 2018 “Lorax decision” (so named because of its citation of the Dr. Seuss book claiming to “speak for the trees, for the trees have no tongues”), which among other findings declared the Forest Service did not have the authority to authorize a right-of-way for the ACP to cross a 0.1-mile segment of land 600 feet below the Appalachian Trail.

Under the U.S. Mineral Leasing Act, the Secretary of the Interior or a delegated agency — in this case the U.S. Forest Service — has the authority to grant natural gas pipelines rights-of-way through federal lands, but not through National Park System lands.

The Appalachian Trail is considered a unit of the National Park System under the National Trails System Act, a status the 4th Circuit pointed to in overturning the right-of-way authorization by the Forest Service, which has jurisdiction over the surrounding George Washington National Forest.

But, the Supreme Court decided Monday, delving into a distinction it discussed at length during the case’s February hearing in Washington, D.C., “trails” and “lands” are not the same thing.

In the majority’s view, the crossing of the George Washington National Forest by the Appalachian Trail functions as an easement, allowing the National Park Service to traverse the land overseen by the U.S. Forest Service but not transferring ownership of that land to the Park Service.

“Read in light of basic property law principles, the plain language of the Trails Act and the agreement between the two agencies did not divest the Forest Service of jurisdiction over the lands that the Trail crosses,” the majority opinion found. “It gave the Department of the Interior (and by delegation the National Park Service) an easement for the specified and limited purpose of establishing and administering a Trail, but the land itself remained under the jurisdiction of the Forest Service.”

Consequently, the court concluded, the provision of the Mineral Leasing Act limiting the granting of pipeline rights-of-way to federal lands that aren’t part of the National Park System, doesn’t apply to the Atlantic Coast Pipeline case and the Forest Service was within its rights to grant the project a permit.

“Sometimes a complicated regulatory scheme may cause us to miss the forest for the trees, but at bottom, these cases boil down to a simple proposition: A trail is a trail, and land is land,” the majority wrote.

Justices Sotomayor and Kagan disagreed, contending that federal “laws, a half century of agency understanding, and common sense confirm that the Trail is land, land on which generations of people have walked.”

The Atlantic Coast Pipeline, which along with the U.S. Forest Service has been fighting the challenge to its right-of-way from environmental groups headed by the Cowpasture River Preservation Association, called the win “an affirmation for the Atlantic Coast Pipeline and communities across our region that are depending on it for jobs, economic growth and clean energy.”

“In its decision today, the Supreme Court upheld the longstanding precedent allowing infrastructure crossings of the Appalachian Trail,” said spokesperson Ann Nallo in a statement. “For decades, more than 50 other pipelines have safely crossed the Trail without disturbing its public use. The Atlantic Coast Pipeline will be no different.”

D. J. Gerken of the Southern Environmental Law Center, which represented project opponents, acknowledged in an SELC statement that the decision “was not what we hoped for” but cautioned that the Supreme Court’s decision only resolves one of many problems troubling the ACP.

Among the outstanding issues are the Forest Service’s special use permit that was overturned by the 4th Circuit and not addressed by the Supreme Court, as well as permits from the U.S. Fish and Wildlife Service, National Park Service, the Virginia Department of Environmental Quality and the Army Corps of Engineers.

Despite these hurdles and doubts from financial firm Morgan Stanley that the ACP will not go forward due to legal problems, Dominion has staunchly insisted the project will be built and that its current costs and schedule will remain on track as long as the company has a productive tree-felling season between November and March.

“We remain confident in the successful completion of the project,” said Dominion president, CEO and chairman Tom Farrell on a May 5 investors’ call. “Customers need this infrastructure now more than ever.”

Opponents continue to dispute the need for the pipeline, particularly in light of the General Assembly’s passage of the Virginia Clean Economy Act during the 2020 session, which commits the state to a 100 percent renewable path by 2050. A case brought by a number of environmental groups, including many of those involved in the Cowpasture case, that has asked the Federal Energy Regulatory Commission to reexamine the need for the ACP is currently pending in the D.C. Circuit Court of Appeals after being put on hold due to the Supreme Court consideration.

“We never needed this pipeline to supply power,” Gerken said. According to briefs filed with the D.C. Circuit in July 2019 by the Southern Environmental Law Center, projections from the PJM power grid and the U.S. Energy Information Administration show that demand for natural gas is expected to remain either flat or decline in the region for the foreseeable future.