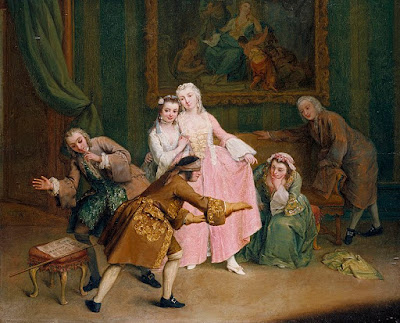 Like many people in these difficult times, I've turned to light reading as a bit of escapism and my most recent choice  has been to reread The Diary of  a Nobody by George and Weedon Grossmith, published in 1892.  The 'nobody' in question is Mr Charlie Pooter, Edwardian bank clerk: a comic creation who tells  terrible jokes yet takes himself rather too seriously.  He dutifully records his household woes, for instance his threat  to walk out if the same blancmange is served up again after seeing it 'for every meal since Wednesday'. He and his wife Carrie are often visited by two friends: Cummings and Gowing (of course he makes a joke about that). Their entertainments include cards, singing, and impressions but also parlour games such as Cutlets.

Cutlets involves one person sitting down, and everyone else being asked in turn to sit on the lap of the person before them until they are arranged one on top of another in a pile, provoking general hilarity. Then, they are asked 'Are you a believer in the great Mogul?' to which they have to answer all together 'Yes, oh yes!' when unexpectedly,  the person on the bottom gets up, resulting in a toppling of the pile.  The game was clearly perceived as a little risqué, as Grossmith presents the husbands as insisting that the wives sit on their spouses' laps and not anyone else's!

This made me think about how grownup  'play' often involves  a challenge to the propriety of the day: the rules of the game  temporarily replacing the normal rules of staid adult mores to allow behaviour that, in the parlance of the day, is a little 'naughty' or 'daring’. 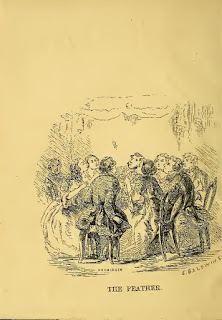 Readers may remember playing Blind Man's Buff  as a child at parties. My memory of the game includes being spun around until you were dizzy when being the 'blind man' and the aim of the game being to catch one of the kids who were calling out and poking you, so that they would have to take over the role and you could escape. However, for centuries the game has clearly been played not only by children but by adults. Tennyson mentions playing it in 1855 and the painting below, by Pietro Longhi  shows it being played in an eighteenth century scene. The original version of the game had a further element that our childish version lacked, which is that the blind man  has to identify, by touch, the person they have captured, before they are allowed to swap roles. Like Cutlets, Blind Man's Buff involves physical contact normally outside the realm of polite behaviour, providing both humour and flirtatious opportunity.

Reverand Crawley's Circle demands that all the players hold hands, but not with the people immediately next to them. The resulting knot then has to be untangled by twisting, turning and stepping through gaps, without letting go, resulting in contortions much like the modern game of Twister. The identity of Reverand Crawley has long ago been lost. Was he even a real person? Or was the name chosen to give a spurious permission from religious authority to get 'up close and personal’?

Sardines is another game that involves close physical contact. The game is a back-to-front version of Hide-and -Seek. Only one player hides, then as each seeker finds them they have to join them in their hiding place so that it becomes progressively more 'cozy' or 'cramped', depending on one's attitude to the person  in close quarters next to you.

Some games, rather than making mischief with polite gender norms, allow a playful expression of aggression. Where are you Moriarty? is a game that presumably makes reference to the longstanding enmity between Holmes and the criminal mastermind. It requires two players, both blindfolded, and each holding a rolled up newspaper, to lie on the floor head to head, with a gap of around a metre between them. One asks the question and when the other answers 'Here!' the first attempts to hit them with the newspaper whilst they roll about trying to avoid getting bashed.

More modern games sometimes have elements of older ones. Killer is a game played at Christmas in our household because it works for almost all age groups, including the elderly, who might prefer to sit. It starts with everyone receiving a piece of paper, only one of which has the word 'Killer' written upon it. The players then sit in a circle while the killer seeks to catch a person's eye and 'kill' them by winking. The victims have to count to twenty before they expire, to give the killer the chance to perform a further massacre before anyone can accuse them. The winner is the person who manages to level a correct  accusation before being winked to death and a wrong accusation results in exclusion from the game. The Victorian game If you Love me Dearest, Smile worked on a similar principle but was far more innocent. It required  a nominated person to smile at the other players to get them to smile in turn, the winner being the last one to hold out against smiling - a gift to a young lady  looking for an excuse  to catch the eye of a particular gentleman . . .

Parlour games may seem rather tame to us today when we're used to more sophisticated entertainment. However, over a Christmas that, at the time of writing, may well be constrained by Covid regulations, they have something to recommend them as a way to entertain the members of a single household, who may have a wide spread of ages. What they all have in common is that they tend to end in one thing - laughter - and we could all do with some of that.