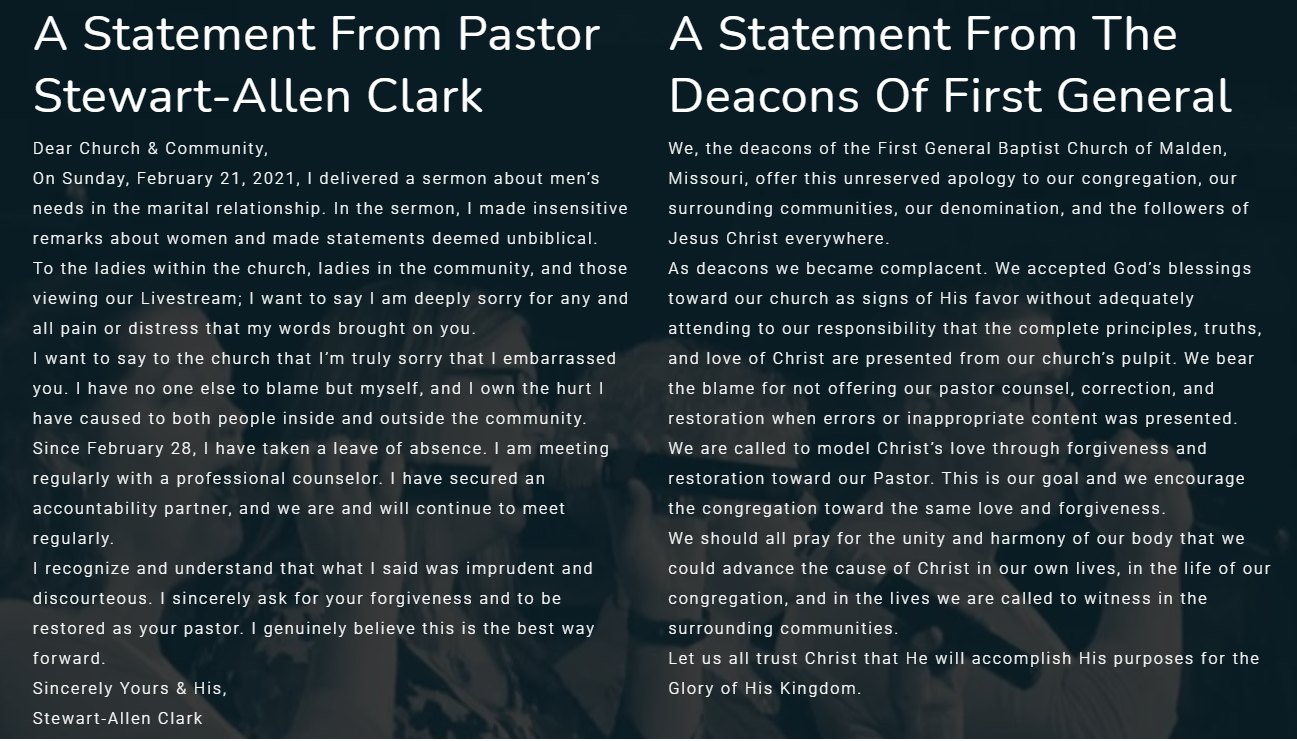 Pastor with Viral ‘Look More Like Melania Trump!’ Sermon is Back and Humbled

A pastor whose sermon went viral after preaching that wives need to look more like Melania Trump and subsequently brought on a tsunami of mockery and condemnation has emerged after over a month of silence.

Returning to the pulpit, Pastor Stewart-Allen Clark of First General Baptist Chuch explained that he’s been in counseling for the last six weeks after being chastised by his church for an unbecoming sermon, that he’s sorry and embarrassed by his unbiblical words, and is desiring to be restored.

You’ll recall he made these comments:

Now look, I’m not saying every woman can be the epic, the epic trophy wife of all time, like Melania Trump — I’m not saying that at all. Most women can’t be trophy wives, but, you know, like her — maybe you’re a participation trophy. I don’t know. But all I can say is not everybody looks like that! Amen?! But you don’t need to look like a butch either!

….So how important is this? Let me tell you something: I have a friend. He has put a “divorce weight” on his wife! That’s how important this is!

…You know, makeup! Makeup is a good thing. You know, my little boy said, “Why do girls wear makeup and perfume?” You say “Because they’re ugly and they stink.” You don’t want to be ugly and stink!

…Scientists have discovered, by the way, a food that diminishes the woman’s sex drive. It’s called the wedding cake. Hahahahahahahaha, yeah.

After the outcry, it was announced by the Deacon ministry team that Pastor Stewart-Allen Clark had taken a leave of absence and was seeking professional counseling. Now, 6 weeks later, he liveth.

In a message on the church website, Clark apologizes for making “insensitive” and “unbibical’ remarks. He states that he is personally embarrassed, and is sorry he embarrassed the church. He writes “I recognize and understand that what I said was imprudent and discourteous. I sincerely ask for your forgiveness and to be restored as your pastor. I genuinely believe this is the best way forward.”

The deacons agree, noting their own faults and failures:

“As deacons we became complacent. We accepted God’s blessings toward our church as signs of His favor without adequately attending to our responsibility that the complete principles, truths, and love of Christ are presented from our church’s pulpit. We bear the blame for not offering our pastor counsel, correction, and restoration when errors or inappropriate content was presented. We are called to model Christ’s love through forgiveness and restoration toward our Pastor.”


The post Pastor with Viral ‘Look More Like Melania Trump!’ Sermon is Back and Humbled appeared first on Protestia.

Pastor with Viral ‘Look More Like Melania Trump!’ Sermon is Back and Humbled