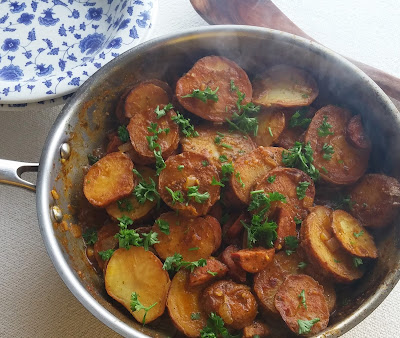 There are a lot of Spanish potato dishes made with this technique but somewhat varying seasonings, with a wide variety of names, often reflecting the locale where the variant is typical. The technique in question is to fry the potatoes first, then stew them in a sauce. The sauce will almost always contain paprika, and I have yet to see a version without garlic, so I am calling this Potatoes in Garlic Sauce.
I put some chorizo in this, because the first version I saw had it, and I got a little fixated on it. Many recipes don't call for it, and I don't think it is at all required, especially since good chorizo can be hard to find. (I got President's Choice, because it was all I could get, but I'm here to tell you that it is best described as bad chorizo.)
Tasty food is described in Spanish as "rico", that is to say; rich. High calorie foods, preferably in the form of meat, have traditionally been regarded as what food should be; perhaps not surprising in an impoverished place with more grazing than arable land, and a lot of labour to be done. In reality though, a dish like this would have been vegetarian much more often than not. The oil and potatoes still keep it plenty "rico".
I've seen this technique in Hungarian dishes as well; if you want to go in that direction, omit the saffron, go a little lighter on the garlic, and use Hungarian paprika. If you want to put in sausage, use a dry smoked Hungarian sausage instead of the chorizo, and there you are.
To my amusement, this reminds me of a favourite dish from my high school days, when I would order French fries with gravy from the school cafeteria, then douse them generously with vinegar and ketchup. I haven't seen leftover French fries in, uh, two years at least, but should such a thing ever reappear, I think toasting them up in a skillet and finishing them in a sauce like this would be a very reasonable way to have them.
I forgot to toast my flour; it should be done before you get started. I don't think it was a dire omission.
2 to 4 servings
1 hour - all working time

Prepare & Fry the Potatoes:
600 grams (3 or 4 large) potatoes
2 to 6 cloves of garlic
1 medium onion
125 grams (1/4 pound) good dry chorizo
1/4 to 1/3 cup mild vegetable OR olive oil
Wash and trim the potatoes; peel them if you like. Cut them into thick (1/4"/1/2 cm) slices, placing them in a large bowl of cold water as you work. Let them stay there until you are ready to start cooking.
Peel and trim the garlic, and cut each clove into 3 slices. Peel and chop the onion - set it aside. If using chorizo, chop it into medium dice.
Heat the oil - enough to cover the bottom of the pan by the thickness of the potatoes - in a large skillet over medium-high heat. Add the garlic cloves and let them fry until a pale straw gold, stirring to keep them cooking evenly. This won't take more than a minute or two. Remove them with a slotted spoon to a food processor or (more traditionally) a mortar.
Lift the amount of potatoes you can fry at once from the water, and pat them dry. Fry them in the oil until a good golden brown on both sides; turn them as needed. Transfer them with the spoon to a plate as they cook, adding more dried potato slices to take their place, until they are all done. This is a slow process; allow 30 to 40 minutes depending on the size of your skillet and how brown you want them. Even if you like them fairly pale, they do need to come out of this process about half cooked so don't rush them - turn down the heat instead.
Make the Sauce & Finish:
3 tablespoons chopped parsley
1/4 to 3/4 teaspoon salt
1 teaspoon Spanish paprika (de la Vera)
1/4 teaspoon saffron threads
1 teaspoon toasted barley OR wheat flour
3 tablespoons apple cider vinegar OR white wine vinegar
1/2 cup water OR broth
1 tablespoon chopped parsley, again
While the potatoes fry, chip away at making the sauce. To the garlic add the washed, dried, and roughly chopped parsley, the salt, paprika, and saffron. Grind to a relatively smooth paste. Then add the flour, mix, and stir in the vinegar.
Once all the potatoes are cooked and removed to a plate, drain the oil out of the pan. Don't wash it; in fact leave just enough oil to now put in the onion and cook it until softened and lightly browned. Add the seasoning purée to the pan. Use the water to swish out whatever utensil you made the paste in, and add that to the pan as well. Gently return the potatoes to the pan. Simmer for a further 15 or 20 minutes until the sauce has thickened to coat the potatoes. Serve at once, with the remaining chopped parsley sprinkled over the top.
Last year at this time I made Balsamic Carrots.
Source: seasonalontariofood