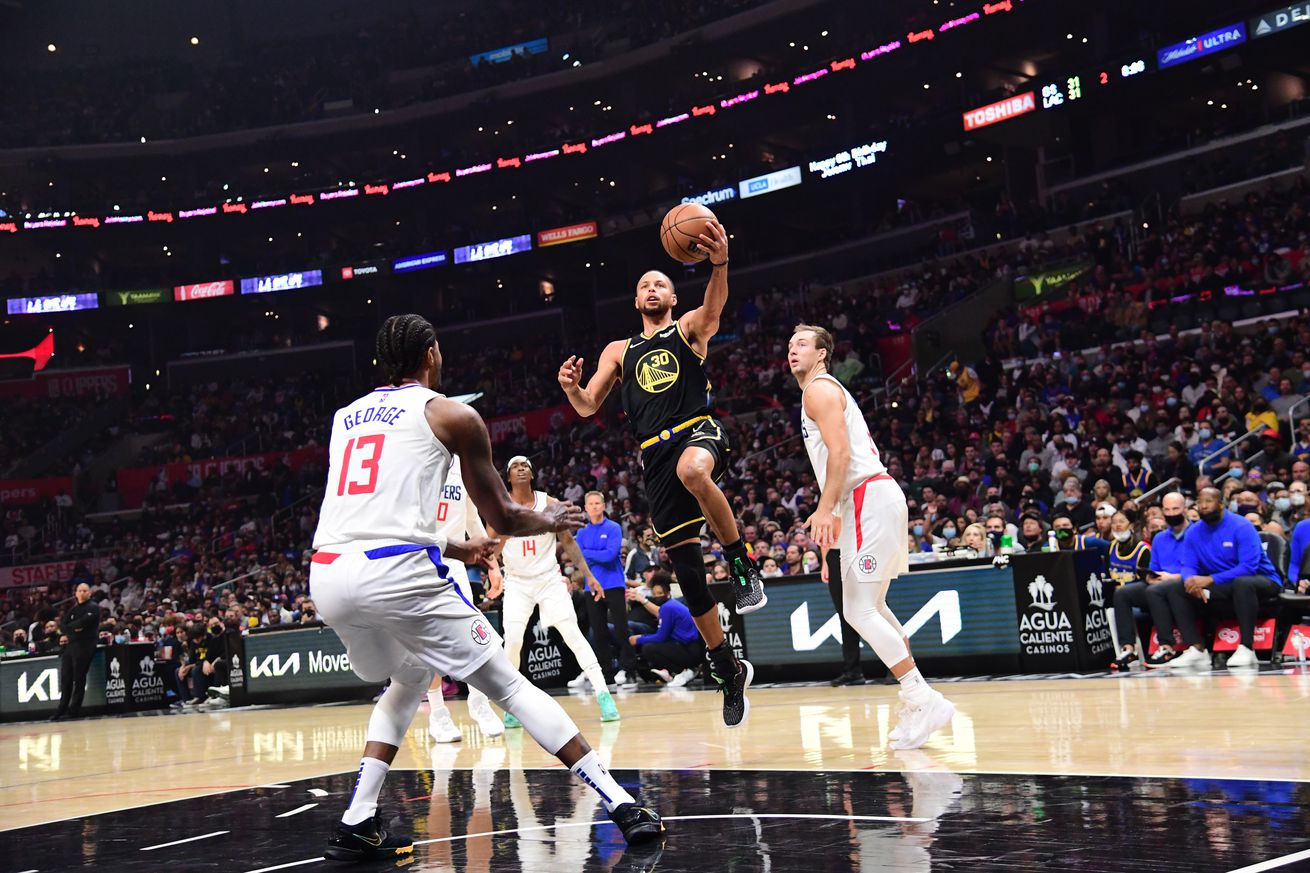 Paul George, Clippers can’t get out of their own way in 105-90 defeat

Steph Curry was the best player on the floor, and the Clippers kept giving the ball to him.

The Clippers put up a valiant effort with the NBA’s best team for nearly three quarters, but they didn’t have enough to keep it competitive for the final 14 minutes, eventually losing 105-90. Paul George had 30 points and finally hit some threes, but he also had eight turnovers as the Clippers collectively gave this game away on the offensive end.

The team had 25 turnovers compared to 18 assists and 32 made field goals, even missing eight free throws in a dispiriting defeat.

At least the defense came to play, especially early. The Clippers successfully snuffed out most of Golden State’s movement, forcing the Warriors away from their preferred actions and into difficult jumpers. There were a few occasions when the Clippers lost track of Stephen Curry in the half court, and he made the home team pay with a 3-pointer on every one of those mistakes. Five Golden State offensive rebounds also led to nine points, but for the most part, the Clippers had to be happy with their half court defense.

The problems really came in transition. George had three turnovers within the first four minutes, a couple on bad passes and one when he simply lost control in the post. In total, the team had 12 turnovers that resulted in 14 Warriors points in the first half.

The Clips had some good possessions posting up the Warriors — George, Marcus Morris Sr., and Serge Ibaka all got in on the fun — but the offense as a whole left a lot to be desired. The team was overpassing, despite consistently coughing it up in the passing lanes, without looking to score enough. George and Morris each had double-digit halves; Reggie Jackson, however, was nowhere to be found with foul trouble and the pesky defensive presence of Gary Payton II limiting him to seven minutes in the opening half. The team only shot 3-of-14 on mostly open threes as well, failing to create any breakages in Golden State’s defensive pressure.

The hope was that the Clippers would reset their offense during the halftime break, but the start of the third quarter was arguably worse than any previous stretch. Jackson passed the ball to Kevon Looney, then Morris traveled on the next possession, leading to a delay of game. George broke the drought with a jumper but gave the ball away on the following play, and the Clippers wouldn’t score again until the Warriors were up 11.

When it seemed like the Clippers were going to lose contact, a technical foul by the Golden State bench appeared to shift the momentum. Isaiah Hartenstein got into the game for the first time and made an instant impact with his rim protection and rebounding as the Clippers got to within one. But Hartenstein inadvertently poked the bear after swatting a Jordan Poole shot out of bounds and earning his own technical; Poole hit four threes in the final 2:35 to extend the lead back to seven.

The Warriors wouldn’t waste that opportunity, pouring it on when George was off the court to start the fourth. Curry showed why he is the early frontrunner for MVP, motivated after receiving a technical of his own on a no-call in transition. The Clippers scored two points in the first four minutes of the fourth quarter; it took 96 seconds for Curry to drop nine of his own.

Golden State came in as the best team in the league, and the Warriors looked it once they flipped the switch. The Clippers needed to be more disciplined to have a chance, and they weren’t.

Paul George, Clippers can’t get out of their own way in 105-90 defeat