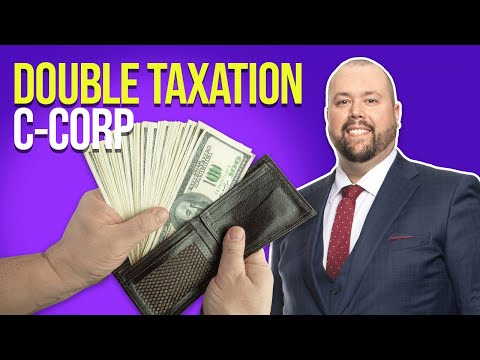 In this episode of Coffee with Carl, attorney Carl Zoellner guides you through the process of paying yourself.

Double taxation within a corporation.

Let’s get to the nitty gritty of it all.

First and foremost, I can’t give you the “one-works-every-time” rule for investors, it’s going to depend on what you’re doing, and on which entity we would suggest.

Usually when someone talks about double taxation and C corporation, it’s because the C corporation currently pays a flat tax of 21% on any income. And then if you pay yourself a salary or dividend, they’re considering the second payment taxable too.

Actually, the most pure form of double taxation in a C corporation is your dividend payment. Dividends are taxed at long-term capital gains rates, so that’s beneficial from a tax perspective, but they’re not deductible to the corporation. If the corporation has taxable income, it’s paying at 21%, and if it’s paying you a dividend as a shareholder or owner, then you’re then paying tax at long-term capital gains rates.

Even in that scenario, in most cases you’re really not looking at anything over 36%, which for a lot of you say in California or states with high income tax, that’s still usually probably lower than your effective rate in a lot of places. So just as a FYI on that one, it’s not quite the monster in a closet we’ve all been taught it is.

Really what it comes down to is if you’re paying tax at multiple levels in a corporation, a lot of times, it’s because you’re not doing the requisite tax planning to avoid it. Like I said, I just want to talk about that a little bit. Is it possible to have two levels of tax within a C corporation? It is, but there’s some real benefits in a C corporation that either don’t work the same as in an S corporation, or just aren’t available.

There’s some specific “in general” reasons to put folks into a C corporation, or have you utilizing a C corporation within your structure, but I did want to talk a little bit about the double taxation thing, because it is one of those topics that pops up quite a bit.

Keep taking advantage of our FREE educational opportunities and the free content we put out on the web. So that’s Toby’s Tax Tuesday, our tax and AP events for our clients who’ve already gone through our Tax and Asset Protection event.

Our Structure Implementation Series is fantastic. That answers a lot of the questions you have in the beginning. So there are a lot of different educational opportunities out there. One of my favorites as well is our Infinity Investing Workshop.

Resources mentioned in this video:

Receive a detailed risk assessment to assist in lowering problem areas that could wipe out all of your assets with one wrong move. Speak with an Anderson Professional Advisor to get your FREE Strategy Session. Limited-Time offer: FREE (a $750 value.)