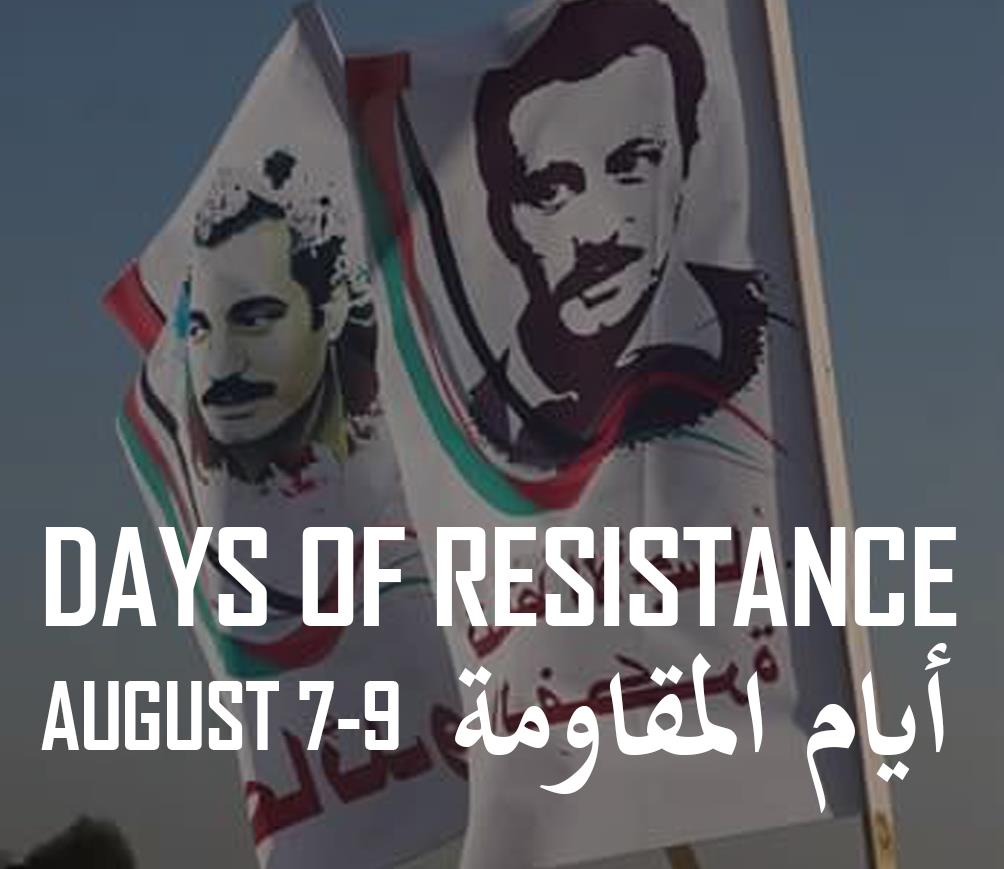 The Days of Resistance are growing – join over 50 organizations in the call to action, August 7-9

Over 50 organizations have joined Samidoun Palestinian Prisoner Solidarity Network in the call for the Days of Resistance for Palestine, 7-9 August 2020, including National Students for Justice in Palestine in the United States, the Palestinian Youth Movement, Al-Awda, the Palestine Right to Return Coalition, and Africa for Palestine. Events are planned in New York, Vancouver, Charleroi, Manchester and Copenhagen, with more action announcements forthcoming. (See upcoming events below)

Today, the program of Israeli annexation continues to threaten Palestinians in the West Bank, including the most fertile agricultural land of the Jordan Valley, which is still slated for Israel’s latest land grab. Of course, this is simply the continuation of over 72 years of land theft, dispossession, apartheid and genocide – but it requires continued mobilization and action to confront, alongside the siege on Gaza, the mass imprisonment of Palestinians, the demolition of homes, the denial of Palestinian refugees’ right to return and further war crimes and crimes against humanity.

Annexation is a continuing threat – especially if the Israeli state thinks that it can pass unnoticed without continued resistance. The struggle is not over; in many ways, it has just begun. We urge you to continue mobilizing to defend the land and people of Palestine and join us in the Days of Resistance, August 7-9.

Endorsers of the Days of Resistance:

Add your organization, collective or group’s endorsement at the link: https://docs.google.com/forms/d/e/1FAIpQLScT3bduPO1aINxKdDD9BnlhfIisuyWyCdB5HZe7UGvhX59oEw/viewform?usp=sf_link

Samidoun Network in occupied Palestine and in the diaspora urges all to consider the days of Friday, Saturday and Sunday, 7 through 9 August, as days of comprehensive struggle, resistance and popular organizing against Zionist colonization throughout occupied Palestine, days of organizing demonstrations and political, cultural and media activities throughout Palestine, in exile and diaspora and everywhere around the world. These actions confront the ongoing Israeli crimes against the Palestinian people, including the Zionist “annexation” project and the deadly siege on Gaza, and aim to strengthen international solidarity with the Palestinian struggle and with the Palestinian prisoners’ movement inside Israeli occupation jails.

If you are organizing an event, would like materials for your action, or have questions, please contact us at samidoun@samidoun.net or message us on Facebook. You can also add your event at the form: https://docs.google.com/forms/d/e/1FAIpQLSfNaThNLE4IvJkYBt_NidTS8goYdvJsDXq_rHKrPWjCRq9QWg/viewform?usp=sf_link

The article The Days of Resistance are growing – join over 50 organizations in the call to action, August 7-9 appeared first on Samidoun: Palestinian Prisoner Solidarity Network.

The Days of Resistance are growing – join over 50 organizations in the call to action, August 7-9