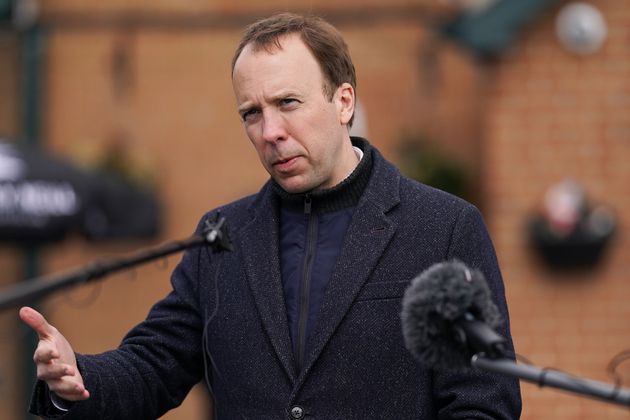 People 35 And Over To Be Offered Covid Jab, Matt Hancock Says

People aged 35 and over will be invited for a Covid jab this week, Matt Hancock has said.

Speaking on Sunday, the health secretary also said new evidence had shown a “high degree of confidence” jabs work against the more transmissible Indian variant, which has said was now “relatively widespread, but in small numbers”.

He also said it was “appropriate” to push on with the major easing of lockdown in England on Monday, despite warnings from scientists and medics.

Warning the India variant could “spread like wildfire among the unvaccinated groups”, he ruled out making jabs mandatory, adding it could disrupt a successful vaccines programme that had been “positive” and “cheerful”: “We don’t think that is the right approach.”

Hancock was also forced to defend the government against criticism it acted too late in imposing heightened border restrictions for travel from India.

He told the BBC’s Andrew Marr Show: “Throughout the pandemic I’ve had these ‘Captain Hindsight’ questions, and what I am telling you is how we took decisions at the time based on the evidence we had at the time.”

Hancock said there are now more than 1,300 cases of the variant in total and it was becoming taking hold in areas including Bolton and Blackburn in the North West.

He adde it was “quite likely” the Indian variant of Covid-19 to become the dominant variant in the UK.

“What that reinforces is the importance of people coming forward for testing and being careful because this isn’t over yet.”

“But the good news is because we have increasing confidence that the vaccine works against the variant, the strategy is on track – it’s just the virus has just gained a bit of pace and we’ve therefore all got to be that bit much more careful and cautious.”

He was unable to rule out regional lockdowns and said the government would use surge vaccinations to tackle a localised rise in cases.

Hancock said five people who have had a single jab have been hospitalised with the Indian variant in Bolton, and one who had received both.

.@SophyRidgeSky: "SAGE are very worried about tomorrow - why are we going ahead?"

If the Indian variant is 50% more transmissible "we have a problem" – but it may be lower – "we just don’t yet know", says Health Secretary @MattHancock.

He told Marr: “We think that there are five people who have ended up in hospital having had one jab.”

Asked about people who have received two jabs, he said: “We think there’s one person, but that person was frail.

“A small number have had one jab and then there’s one case where they’ve had two jabs and they’ve ended up in hospital and they were frail.”

Asked if anyone had died with the Indian variant after receiving two jabs,  Hancock said: “Not that we’re aware of.”

Offering good news to plans to ease restrictions without unleashing a fresh wave of infections and deaths, Hancock said there is “new very early data” from Oxford University giving confidence that existing vaccines work against the variant.

“That means that we can stay on course with our strategy of using the vaccine to deal with the pandemic and opening up carefully and cautiously but we do need to be really very vigilant to the spread of the disease,” he told Sky’s Sophy Ridge On Sunday.

“We have a high degree of confidence that the vaccine will overcome.”

Hancock said the government will decide on June 14 whether all legal restrictions can be ended in the final step of the road map out of lockdown on June 21.

He did not rule out the possibility that Monday’s easing may have to be reversed if the variant pushed up case numbers, but said the hope is the “cautious and irreversible approach” can continue.

People 35 And Over To Be Offered Covid Jab, Matt Hancock Says