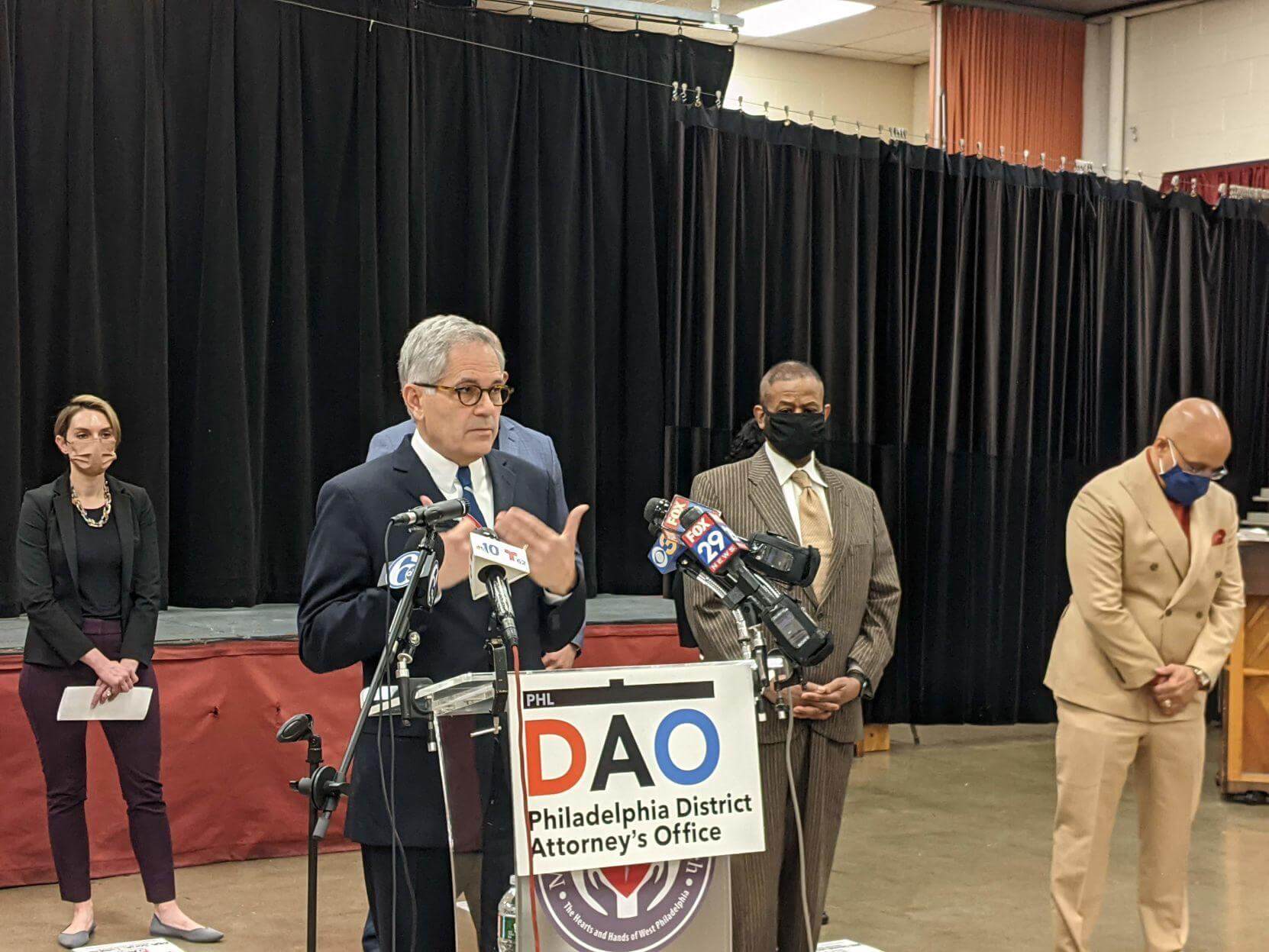 Philly DA Krasner: We’re doing ‘everything we can’ to fight rising violence against city women 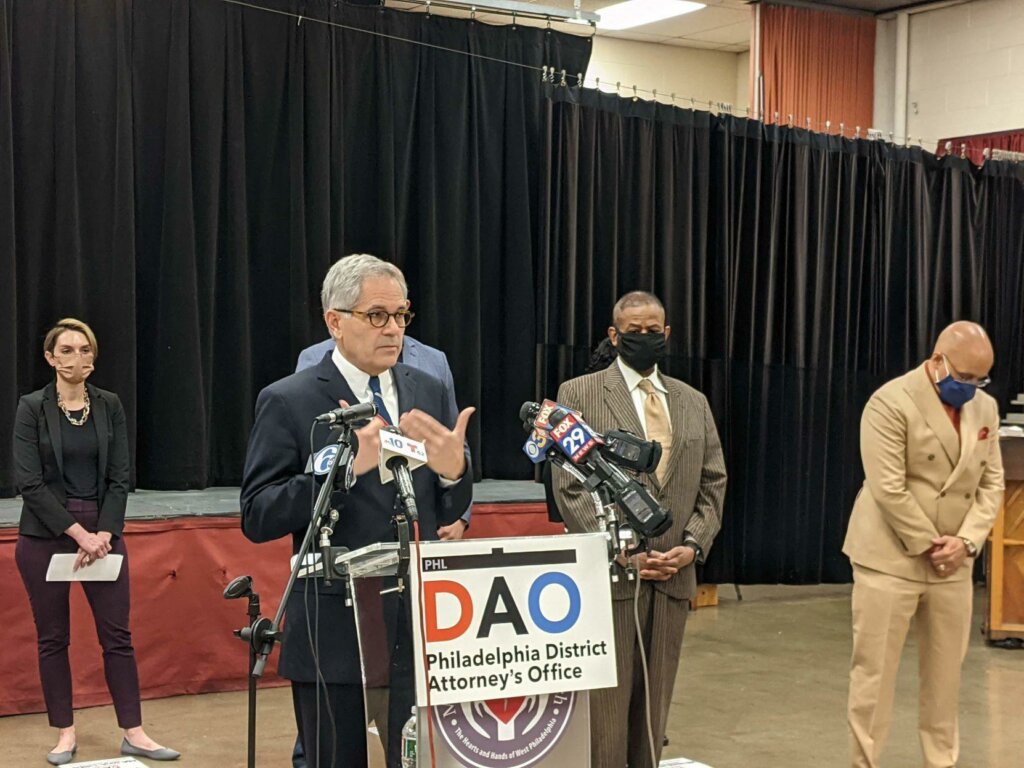 PHILADELPHIA — A woman who was seven months pregnant and her unborn baby were killed Saturday in a shooting at 8:30 p.m. in the 6100 block of Palmetto Street in the Crescentville area of Philadelphia.

Jessica Covington, 32, was unloading her baby shower gifts when she was shot in the head and stomach.

Standing in front of members of the news media at Vaux Big Picture High School in North Philadelphia, District Attorney Larry Krasner was visibly emotional recalling the details of Covington’s case. There has been no arrest at this time, and there is a $50,000 reward for any information that leads to solving this case.

Philadelphia has had 496 homicides in 2021, just three less than the 499 from all of 2020. The city’s deadliest year was in 1990 with 500 homicides, and Philadelphia is quickly approaching that record.

Over the last week, from Nov. 13-19, there were 10 homicides and 25 non-fatal shootings. In addition, there were 229 gun-related incidents throughout the week, which led to 85 arrests, and the District Attorney’s Office charged 84 cases.

Krasner was asked what his office is doing specifically about increasing violence against women in the city.

“Short answer is everything we can,” Krasner said. “Needless to say, we believe that there are two aspects to it — one of them is enforcement, and we are extremely serious about accountability in the cases that PPD is able to solve. We had a very high rate of conviction on homicides and homicide-by-gun cases before the pandemic arrived,” Krasner continued. “I can tell you there’s some good news on that front, which is that we are expecting in January that the capacity of the courts to actually try cases will increase significantly.”

Krasner also said he sees a direct correlation between the parole system in the city and gun violence because of the number of people under parole supervision that don’t need it and violent crime offenders who don’t get the proper attention.

“If you allow your probation and parole officers to spend their time on people who present a bona fide danger,” Krasner said, “if you allow that caseload to meet national standards and if you stop spending resources filling jails up with people who smoke weed seven years after they paid the price of a sentence, then you’re able to use those resources in ways that are protected for treatment or prevention for things that really, truly make a difference.”

“Philadelphia at that time was the most over-supervised big city in the United States of America,” Krasner said. “A place where we have national parks and landmarks dedicated to freedom. And even though tourists come here to see that when they walked down the street, to get to those landmarks and get to those parks, approximately one out of every nine African-American males they passed was currently on probation and parole, one out of every 23 Philadelphians was currently on probation.”

Krasner’s office is working toward new policies on parole in Philadelphia.

According to Keisha Hudson, incoming chief defender of the Philadelphia public defenders, the new policies help to stem mass incarceration.

Byron Cotter, the director of alternative sentencing for the Defender Association of Philadelphia, talked about a mother who paid her debt to society and is now thriving with a job and wants to buy a house. However, she cannot obtain a mortgage because of her probation, even though she has a stable job.

“If I can get her probation terminated, she’s going to skyrocket,” Cotter said. “She’s going to be a productive citizen of the state of Pennsylvania, a taxpayer, and make sure that her children do extremely well.”

Dominic Speach, the re-entry project manager for PowerCorps PHL, is currently serving five years into an 11-year parole sentence. Because of travel restrictions, he gets passed over for opportunities within his jurisdiction.

PowerCorps PHL is an organization that helps reconnect people to society after being in jail or prison and helps find success in the job market.

“I might get overlooked because of my travel restrictions,” Speach said. “Me asking for permission to leave the state has always been an issue. Sometimes people might not ask me because they know that I had to reach out to a probation officer for approval. I think 11 years is a long time for anyone — especially someone who has served half their time with no violations.”

Jay Adams, a Re-entry Program manager for PowerCorps PHL, said he once had a parole officer who was lenient with him, and he progressed and became a productive member of society.

“I would like to state that when you have a parole officer or a system that is behind you and encourages you to do well, it gives you the opportunity and space to breathe,” he said.

Brian Saunders is a reporter for the Philadelphia Tribune, where this story first appeared.

The post Philly DA Krasner: We’re doing ‘everything we can’ to fight rising violence against city women appeared first on Pennsylvania Capital-Star.

Philly DA Krasner: We’re doing ‘everything we can’ to fight rising violence against city women