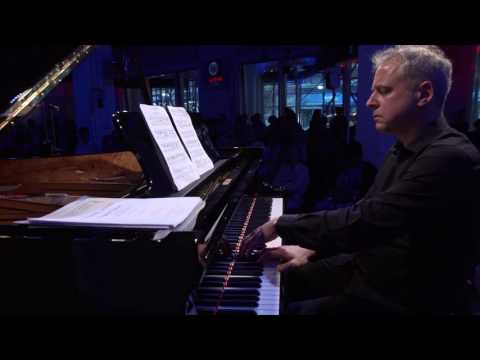 PLEASE HELP THE EAR. IF YOU LIKE A CERTAIN BLOG POST, SPREAD THE WORD. FORWARD A LINK TO IT OR, SHARE IT or TAG IT (not just “Like” it) ON FACEBOOK. Performers can use the extra exposure to draw potential audience members to an event. And you might even attract new readers and subscribers to the blog.

Jeremy Denk (below) is not only one of the top pianists on the concert stage today. He is also one of the most interesting and thoughtful pianists when it comes to original, innovative and eclectic programming.

Denk will display his talents again when he performs his third solo recital in Madison this Friday night, Dec. 11, for the Wisconsin Union Theater.

The concert of music by Robert Schumann, Clara Schumann, Johannes Brahms and Missy Mazzoli is at 7:30 p.m. and will be preceded by a public Q&A at 7 p.m. Because of the coronavirus pandemic, both the discussion and the concert will be virtual and online.

Access to the online posting is $20 for the general public, $17 for Wisconsin Union members, and $10 for students.

Denk’s performance, which is part of the Theater’s 101st Annual Concert Series, will include “Papillons” (Butterflies), Op. 2, by Robert Schumann; Three Romances, Op. 21, by Clara Schumann; “Bolts of Loving Thunder” by the contemporary American composer Missy Mazzoli (below); and Four Pieces for Piano, Op. 119, by Johannes Brahms. (You can hear Denk play the lyrically introspective first intermezzo of Brahms’ late Op. 119 in the YouTube video at the bottom.)

Ticket buyers will receive an email from the box office approximately 2 hours before the event begins that will contain their link to view the performance. Anyone who purchases a ticket within 2 hours of the event’s start time will receive their email within 15 minutes of purchase.

To The Ear, Denk’s well-planned and fascinating program seems like a probing contrast-and-compare, narrative exploration of the musical styles and close personal relationships – a kind of love triangle — between Robert and Clara Schumann (below top); between Robert Schumann and Johannes Brahms, whom Robert Schumann championed; and between Brahms and Clara Schumann, who also championed Brahms (below bottom) but rejected him as a lover and suitor after the premature death of her husband Robert.

One of America’s foremost pianists, Denk is a winner of a MacArthur “Genius” Fellowship, and the Avery Fisher Prize, and was recently elected to the American Academy of Arts and Sciences.

In the United States, Denk has performed with the Chicago Symphony, New York Philharmonic, Los Angeles Philharmonic, San Francisco Symphony and Cleveland Orchestra and frequently performs at Carnegie Hall. Internationally, he has toured with the world-famous Academy of St. Martin in the Fields and performed at Royal Albert Hall as part of the BBC Proms.

Denk’s talents include writing about music. Some of his stories about music have been featured on the front page of The New York Times Book Review as well as in The New Yorker, The New Republic and The Guardian. Many of those writings form the basis for a forthcoming book.

His passion for composing both music and writing compositions is evident in his music-based blog “Think Denk” — “to think” in German is “denizen” — which dates back to 2005.

“Jeremy Denk is one of the greatest pianists of our generation,” says WUT director Elizabeth Snodgross. “While many pianists specialize in a particular period or composer, Jeremy is a musical omnivore whose wide-ranging interests span centuries and styles, and he is exceptional at playing all of them. As The New York Times said, he is  ‘a pianist you want to hear no matter what he performs.’”

Proof of that can be found in the program “c. 1300-c. 2000” he toured with and recorded last year for Nonesuch, which features a sampling tour of 700 years of keyboard compositions.

Said a critic for the Boston Globe: “Denk has “an unerring sense of the music’s dramatic structure and a great actor’s intuition for timing.”

This performance was made possible by the David and Kato Perlman Chamber Music Endowment Fund.

For more information and a video clip of Denk playing different Brahms, go to: https://union.wisc.edu/events-and-activities/event-calendar/event/jeremy-denk/