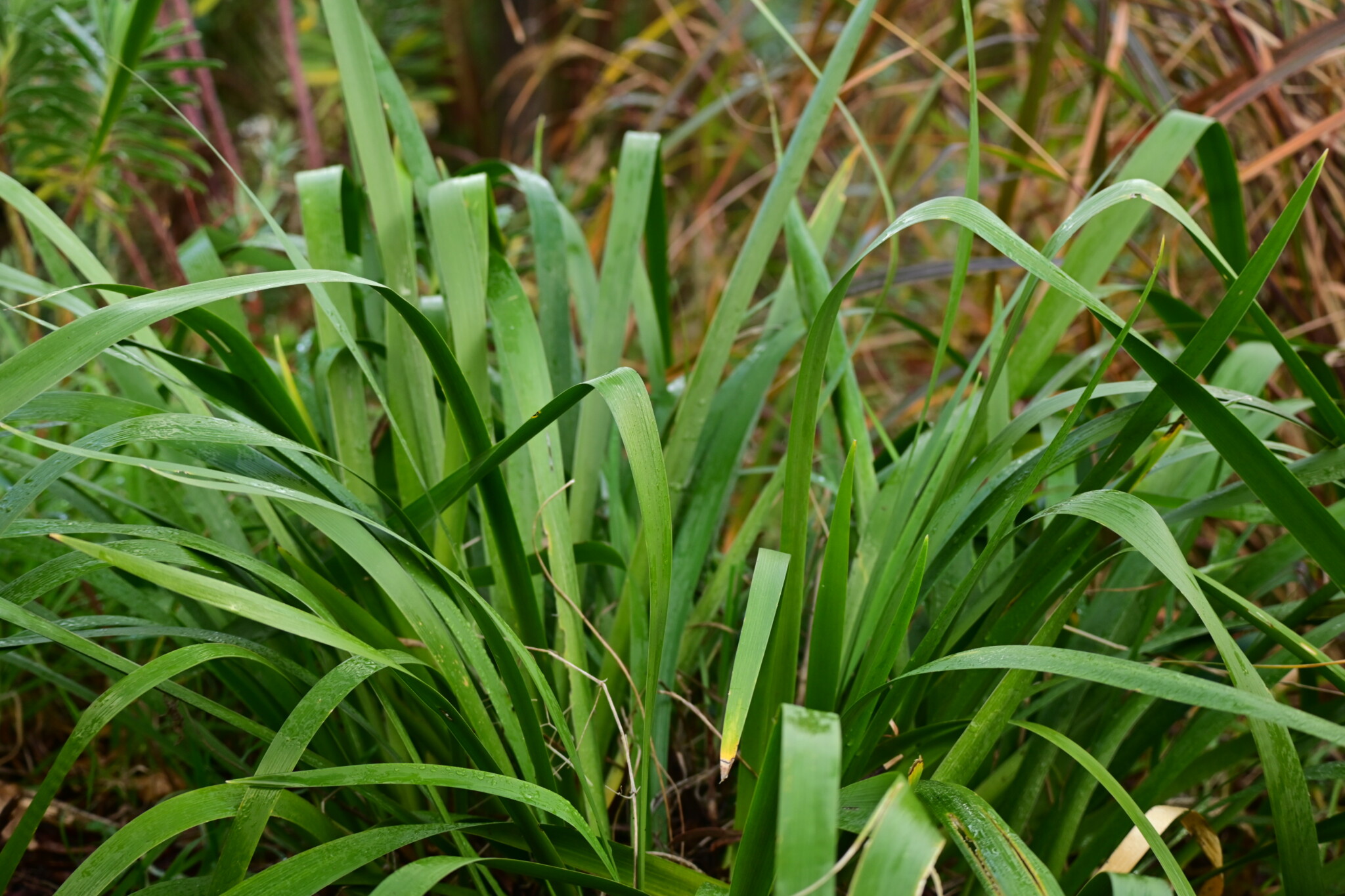 PLANT OF THE WEEK #55: Iris foetidissima

My foolproof go-to plants in root-ridden shade beneath dense-canopied trees make a very short list indeed.  The first is Euphorbia robbiae, about which Richard … wrote nearly a year ago.  Catch up with that here.  Another is Iris foetidissima – the charmingly named stinking iris.

Now is this Iris’s big moment. Fat, heavy seed capsules split open in threes, hanging down in a propeller configuration, and underhung with brilliant orange spherical seeds, clinging by no visible means.  They’re fabulously ornamental, and all the more eye-catching for arising, as they do, in deep, dark, lurking locations where you don’t expect to see anything at all.

The foliage is a rich deep green that perfectly befits such a low-light lover.  It’s not at all exciting, but is pleasingly sword-like, and works well as a contrast in form to other plants that might otherwise clothe the ground in its favoured spots, like ivy, or violets, or the aforementioned Euphorbia robbiae.  The smell of it, when bruised, reminds some of roast beef.  I find that a bit of a stretch, and resonate more with other’s detection of the fragrance of burnt tyres.  But I’m forever having a sniff of it to see which way I go, so if nothing else, it’s got me in.

Iris foetidissima does self-sow a bit.  It may well be irresponsible of me to write about it at all.  So be it.  Having introduced it from someone else’s garden, you’ll find it pops up here and there, but mostly where little else will grow, and where you’ll be grateful for it.  Locations suggest that they’re pooped out by birds.  We have a colony or two emerging in the grass under our oak, beneath favoured roosting sites.

Every other iris you’ve ever grown is grown for its flowers.  The common form of Iris foetidissima bears slightly grimy pale yellow flowers in spring.  They’re captivating really close up, being intricately pencilled, but it’s just as likely you won’t notice them.  Not until the seeds follow the flowers.

I was always determined that Plant of the Week wasn’t going to try and ‘sell’ you a plant, or to talk it up.  In some weeks I feel like we’ve come dangerously close.  But I think I’ve made up for that pretty well this week, don’t you?

Does Iris foetidissima grow in your garden?  I’d love to hear if it’s self-sowing habits ever cross over into the annoying, or if, like me, your grateful for it.

The post PLANT OF THE WEEK #55: Iris foetidissima appeared first on The Gardenist.

PLANT OF THE WEEK #55: Iris foetidissima