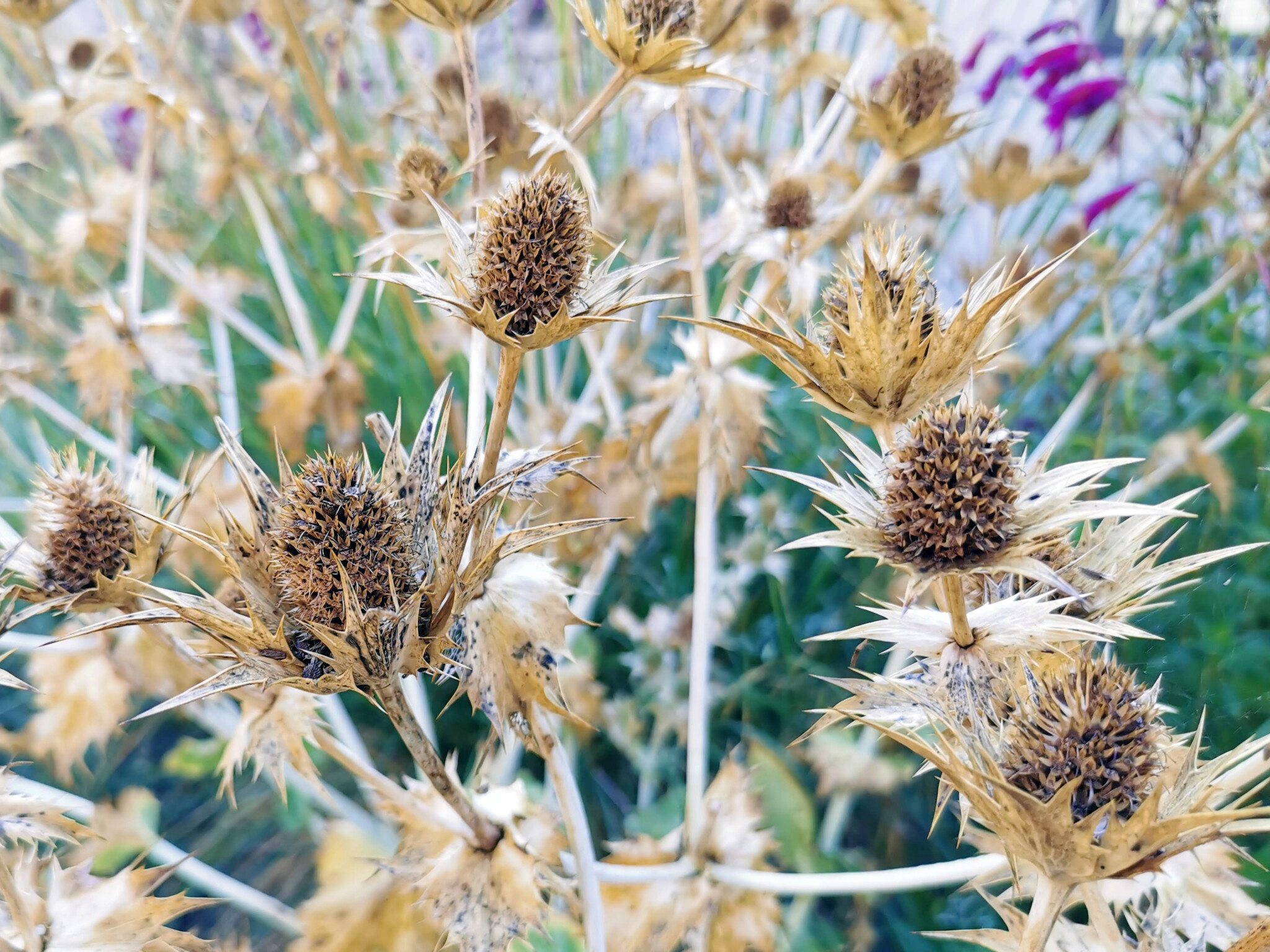 If there’s something strange in your garden bed, who ya gonna call?

Miss Willmott, so the story goes, liked to sprinkle seeds of a giant sea holly when visiting gardens.

Goodness knows what her hosts made of this. Miss Willmott was a plantswoman extraordinaire who at one time employed 104 gardeners at her own home. Was she literally dropping hints that her friends’ borders lacked sparkle? Did they curse the extra weeding? Or did they allow the seedlings – by choice or through obliviousness – to grow into plants?

If it was the latter, they were lucky (and, I imagine, very grateful).

The first time I saw the sea holly in question – Eryngium giganteum ‘Miss Willmott’s Ghost’ – was four years ago. I was in the gardens of a nursery while on a trip back to the UK and the prickly silver bracts and large cones caught my eye.

When I returned home, in a rush of excitement to obtain the plant for my garden, I bought some seeds. I knew already that Miss Willmott’s Ghost was a biennial and wouldn’t flower before its second growing season. It was the first time I’d had to chill seeds in the fridge, though, to break their dormancy. That took some explaining to my family.

I did, however, manage to raise several seedlings. Three survived into the second season, and I was rewarded with Miss Willmott’s Ghost shimmering away in our garden throughout last summer.

It was well worth the wait. In fact, from spring to autumn, Miss Willmott’s Ghost had me captivated. Heavily veined green leaves emerged in November. Then the first flower cone appeared. Over the next month, stems powered out of the ground and branched out, forming a plant of about 90cm by 90cm. By this point, the bracts and cones had developed a newly-minted silveriness.

Miss Willmott’s Ghost looked fabulous for the rest of the summer. She became ghostlier (yet still attractive) with the arrival of autumn, the cones turning into dark seedheads and the bracts and stems fading to almost white.

One of the aspects of Miss Willmott’s Ghost that I’ve most enjoyed has been the contrast with neighbouring plants. In particular, Stipa gigantea. This was much more of a happy accident than a vision of how they would work together. (Have you had some of those, too?) I especially loved the wands of the Stipa rising through the Eryngium flowers. They swayed gently in unison like a choir.

Sadly, the performance is coming to an end and Miss Willmott’s Ghost will leave the stage. I’ve yet to work out how to replace her. Any suggestions?

I’ve saved some seeds and, of course, plenty more have fallen from the plants.

So if the ghost of Miss Willmott is out there, please call round again.

Richard Padgett is bringing to life his design for his garden in Woodend, Victoria. You can follow his progress on Instagram: @richard_creates

The post PLANT OF THE WEEK #59: Eryngium giganteum ‘Miss Willmott’s Ghost’ appeared first on The Gardenist.