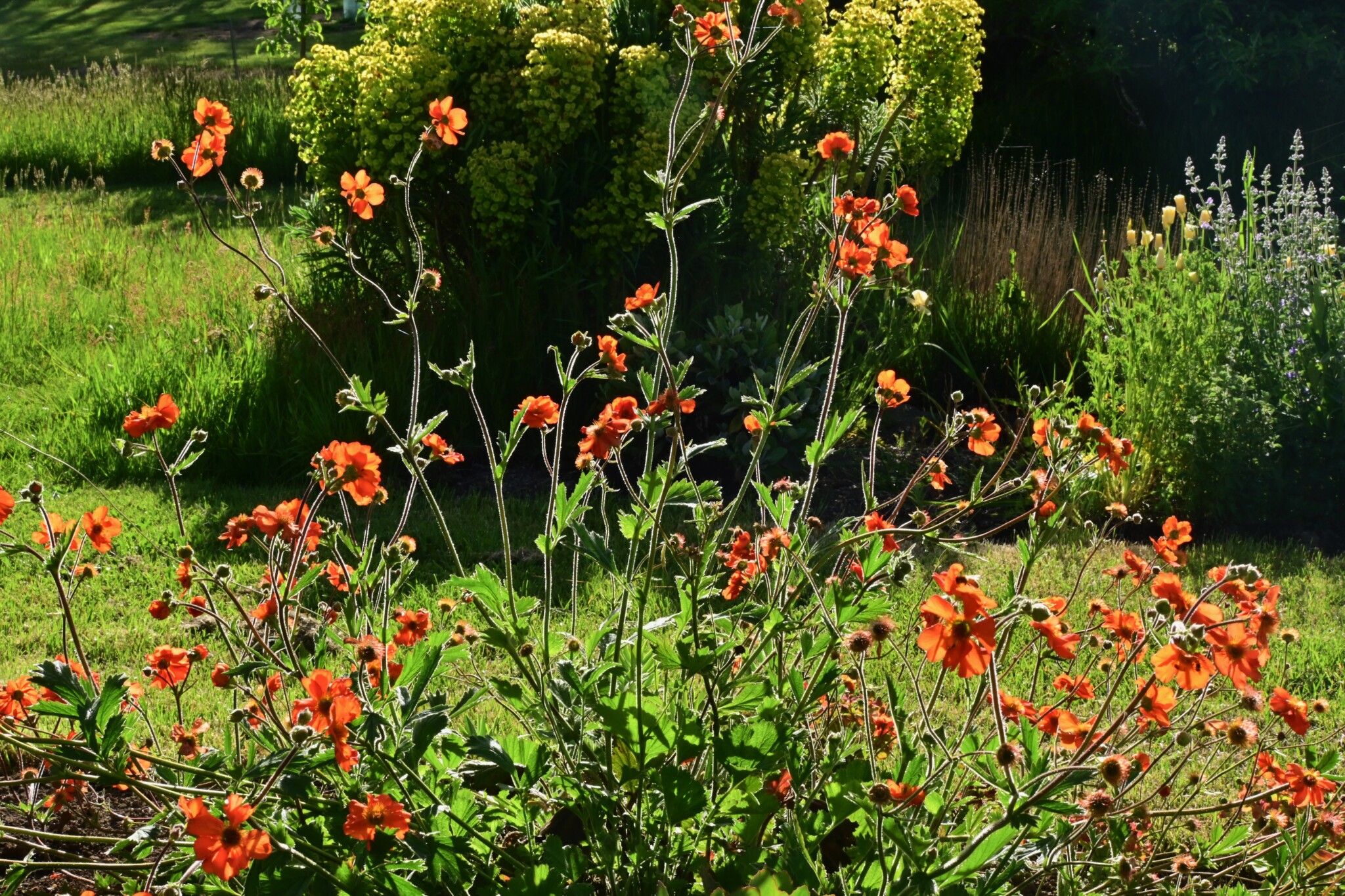 There’s been a twenty-or-so year hiatus in my growing of Geum ‘Tangerine’.  Now I have it back, I wonder how I survived without it.

According to the Woodbridge nursery website, it was Dennis Norgate that kept this old form in circulation (as he did so, so many other great plants, during a period when perennials were deeply unfashionable).  Its most memorable trait is its screaming tangerine flowers, about as clean and high-energy an orange as you can imagine. Their airy spacing, held aloft on fine, wiry stems, leaves me with the lingering perception that the flowers are numerous but individually quite small, but I’ve just gone and measured some, and they’re 5cm across – much larger than I’d have guessed.

The flowering time can be incredibly long, from very early spring, spanning most of the warmer months, though if you can’t water, as I can’t, then they’ll go very quiet over the summer, and even where you have water, it’s right now that they’re making their greatest contribution, before the vast majority of perennials start to flower.

Geum ‘Tangerine’ also falls into that particular (and rather small) category of plants that stretch their above ground parts way beyond the spread of their growing crown.  This can be very useful in that it allows a reasonable amount of space around each crown for, say, early bulbs, or relatively shade tolerant early low-growers like violets.  Add to that the even rarer trait of carrying very little foliage on their wiry flower stems, and you have a plant that can be tucked quite tightly between other perennials, as even though the spread of the flowers might be as much as 180cm, the flowering stems cast virtually no shade at all, and can recline on, and intermingle with, the surrounding (and probably later flowering) plants without compromising their growth in any way.

Indeed, the mound of actual foliage is only about 50cm high and wide, while the flowers will stretch up to a metre in height, gradually sprawling sideways.  Something like Nepeta ‘Six Hill’s Giant’ has a similar sideways spread from a similarly minimal crown, but it shades and outcompetes virtually everything within its 2m grasp.  Geum ‘Tangerine’ does no such thing.  In that sense, it’s infinitely more ‘sociable’ than many of the other early flowering perennials.

Furthermore, it really doesn’t mind being a bit squeezed between other stuff in mid summer, when for me it’s not likely to be contributing much in the way of flower.  The ‘bun’ of leaves is relatively shade tolerant, and is therefore likely to survive the competition of the later, taller stuff.  All up, that makes it a fabulous plant to fling itself over and through an otherwise late-flowering perennial palette.

Last year, out of mild curiosity, I planted some Geum ‘Red Wings’ near to my clusters of ‘Tangerine’.  The combination is thrilling.

If Geum ‘Tangerine’ sounds a bit too undisciplined and flamboyant in colour and structure, you could revert to the much more demurely coloured and primly upright Geum ‘Totally Tangerine’.  So many instagrammers seem to prefer the latter.  Personally, I don’t think it’s a patch on the older, wilder Geum ‘Tangerine’.

The post PLANT OF THE WEEK #79: Geum ‘Tangerine’ appeared first on The Gardenist.