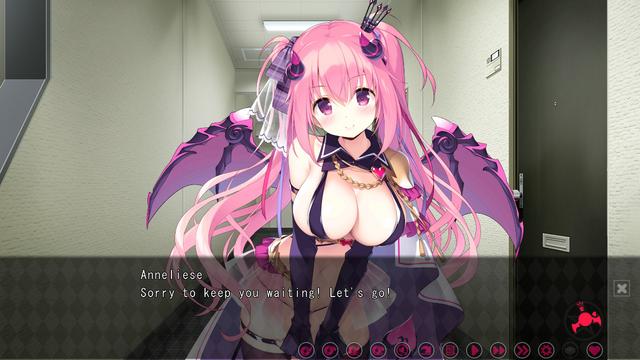 A medium and a succubus investigate a mystery in Silky's Plus Wasabi’s Kimagure Temptation, a point-and-click adventure game now available on Denpasoft and Steam.

Kimagure Temptation follows the story of Haruhisa Tatsumi, a young diviner working for the Bureau of Divination, a special division dedicated to solving supernatural crimes. When four men are gruesomely murdered in an apartment building, Tatsumi is called in to investigate. Along the way, he also comes in contact with Anneliese, a goofy demon from England, who agrees to work with him in exchange for the right to remain in Japan for as long as she pleases.

Though the aid of a demon may have initially sounded like a good asset, Tatsumi soon comes to regret it. The two move into the haunted apartment building to lure out the ghost and investigate the mystery. Annalise has little interest in detective work, much preferring to have some fun with the young man instead. Having little experience with women, Tatsumi finds it much more tempting and distracting than he expected.

Kimagure Temptation is primarily a visual novel, with point-and-click adventure game elements. It offers a large degree of freedom, with the ability to freely explore the building and with frequent opportunities to make choices. Certain decisions matter much more than others and will lead the protagonist towards one of the game's six different endings. The game features Japanese voice acting and Live2D animations.

In a certain apartment building in a certain town, four of its tenants were found dead. Not only that but their stomachs were gruesomely sliced open and their organs removed. A thick miasma emanating from inside the building suggests that something supernatural was involved. When not even the police can step in due to the mysterious nature of the incident, that's when Haruhisa Tatsumi is called in. Haruhisa is a diviner who works under the Bureau of Divination which is in charge of matters of a supernatural nature.

Alongside Anneliese, a demon from England who also traveled to Japan for her own reasons, the two of them will investigate what happened in the apartment and unravel the mystery behind those deaths.

...Or that's how the plan was supposed to go but Anneliese is a creature of the night and seems more interested in Haruhisa instead. Will he be able to fight against temptation or will he simply give in to his own desires?

A strange life begins in a cursed apartment with a diviner trying to do his job and solve the mystery and a demon girl that would rather just make out with him.

• Point and click adventure with 6 different endings to discover

• Full Japanese voice acting (except for the protagonist)

Kimagure Temptation is now available on Steam and Denpasoft for $19.99. Adult content for the Steam version of the game has to be installed separately using a free patch available on Depnasoft's storefront.