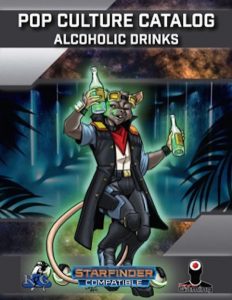 This installment of the Pop Culture Catalog-series clocks in at 17 pages, 1 page front cover, 1 page editorial, 2 pages of SRD, leaving us with 13 pages of content, so let’s take a look!

As always, we begin this supplement with an explanation of the fandom rules that serve as a backbone for the series – and since I’ve already covered a few of these, I won’t recap them right now.

We begin with 8 fully fleshed out alcohol producer brands you can find in the Xa-Osoro system – as always, these have excellent full-color logos (!!) for each company provided – and while I usually try to provide some nods on the clever twists of the real world companies that acted as inspiration for these, being German, I feel I’m not too familiar with the inspirations behind these companies this time around. That being said, even without this meta-angle, I found myself enjoying what’s here, so let me take you on a brief tour, shall we? The Barrelchest clan (dwarves, obviously) is an old-school dwarven operation – costly (x2.5 price modifier), but the council-run brewery is old-school and dedicated to classic recipes – as a Franconian, I can get behind old-school beer executed well. Fans of this company are known among dwarves for their excellent taste, gaining a +3 insight bonus to Bluff and Diplomacy, and cool: Ingesting the brew enhances Athletics and initiative in a manner that scales for fans, keeping the benefit relevant at higher levels. If the Barrelchests represent traditional beer craftsmanship, Xiks-Zavin is more of a mega-brewery – kobold-run, it is famed for its Heirlag signature brew, and you can get it anywhere, with the fandom benefit helping further with Diplomacy.

Prefer wine? The Goldenbrooke winery is run by elves, with the matriarch establishing the brand as something for the elite (price modifier x3), and as such, fans have an easier time passing as a being of high social class. The Vixen baijiu and sake brewery is, unsurprisingly, run by kitsune, and fans will have an easier time dealing with Culture checks pertaining to races like vanara, kitsune, etc., and have an easier time changing their attitudes.

Minos Imbroglio would be a whiskey distillery (price x2) for the thinking man, fans gaining benefits to trying to solve complex puzzles and conundrums. Robogogo is less pricey (price modifier x1.5) and is a mechanoi-run combination brewery distillery – which features nanites that allow synthetic consumers to get drunk via scripts! And yes, organic life also can experience that. This is a cool concept, and synthetic life benefits further from being a fan here- Cheaper still, the combination brewery/distillery Uncle Uglee’s focuses on quick and cheap booze, but is also a storied company, which helps fans deal with gnolls. Finally, there would be the expensive (x2.5 price modifier) Rotgut company – a vrutloggery. What’s that, you ask? Well, know how vesk are pretty much carnivores? Picture adding yeast to caramelized meat, and making thus alcohol from the controlled rotted meat. This might sound weird, but to me, this sounds at least interesting…but then again, I’m a weirdo and love me some Bamberg smoked beer, which tastes pretty much like liquid bacon crossed with beer. Fans will benefit from imbibing by having their melee and thrown weapon capabilities enhanced.

And yes, the fandom perks essentially all add benefits to imbibing the respective brew, but what about the brews? Well, know how the excellent installment on Vice Dens (which you SHOULD own!) has introduced a scaling drug engine that allows a given item to increase over the item levels, instead of being fixed on a single item level? Guess what? This system is employed here as well, and we not only get one or two different drinks – unless I’ve miscounted, 35 (!!) drinks are included, and range from three whiskey types to different baijius. Ale hydrates you and fortifies vs. emotion effects, while beer helps you with contest skill challenges; lichbrew beer is alcohol for the undead and nets you scaling SR, while dwarven stout provides temporary DR 5/- against nonlethal damage. Regular stouts help with Strength- and Dexterity-based skill challenge checks. Interesting: Several of these also bestow their benefits upon certain intoxication stages, for example cider, which nets you bonuses when weakened or further along the track. Speaking of intoxication: There is a cool sidebar that does explain how intoxication can be thought of and represented in Starfinder.

Horilka fortifies against negative emotions and makes you susceptible to merriment; not all are helpful, though: Jamboozal juice is cheap, and gets you drunk fast – essentially a fruit-based moonshine. Mind-eraser liqueur can fortify you against mind-affecting effects, and mescal helps against fear – and helps with atk and skill checks if you’re sufficiently inebriated. Skittermander skitterseq is cool: If you’re far enough along the poison track, you’re under haste. Get that. Haste. That spell and being drunk? I’d so love to see the hilarious outcomes of that combination in real life…the Nova Age can’t come soon enough. And yes, I am just giving you a general overview of these cool brews!

Editing and formatting are very good, I noticed no serious glitches on a formal or rules-language level. Layout adheres to the series’ two-column full-color standard, and the original full-color artworks are really nice. The pdf comes fully bookmarked in spite of its brevity.

Alexander Augunas’ delivers big time in this amazing installment; the drinks are amazing, their benefits balanced and yet tangible – and surprisingly differentiated. I was seriously enjoying reading this humble pdf, and after the great Vice Den-file, this represents a must-own expansion to the subject matter. I mean, while we should all drink responsibly, the same doesn’t hold true for our characters, right? With plausible effects for mundane alcohol and brews breathing the spirit of science-fantasy side by side, this pdf is a resounding success. 5 stars + seal of approval, and this shares the Vice Den-files’ status as a candidate for my Top Ten of 2019; the combination of those two? Gold.

You can get this excellent pdf here on OBS!

Missed the superb Vice Dens-pdf? You can find it here!

The superb Advanced Skill Guide with its skill challenge rules may be found here!

If you enjoy my reviews, please consider leaving a donation or joining my patreon.