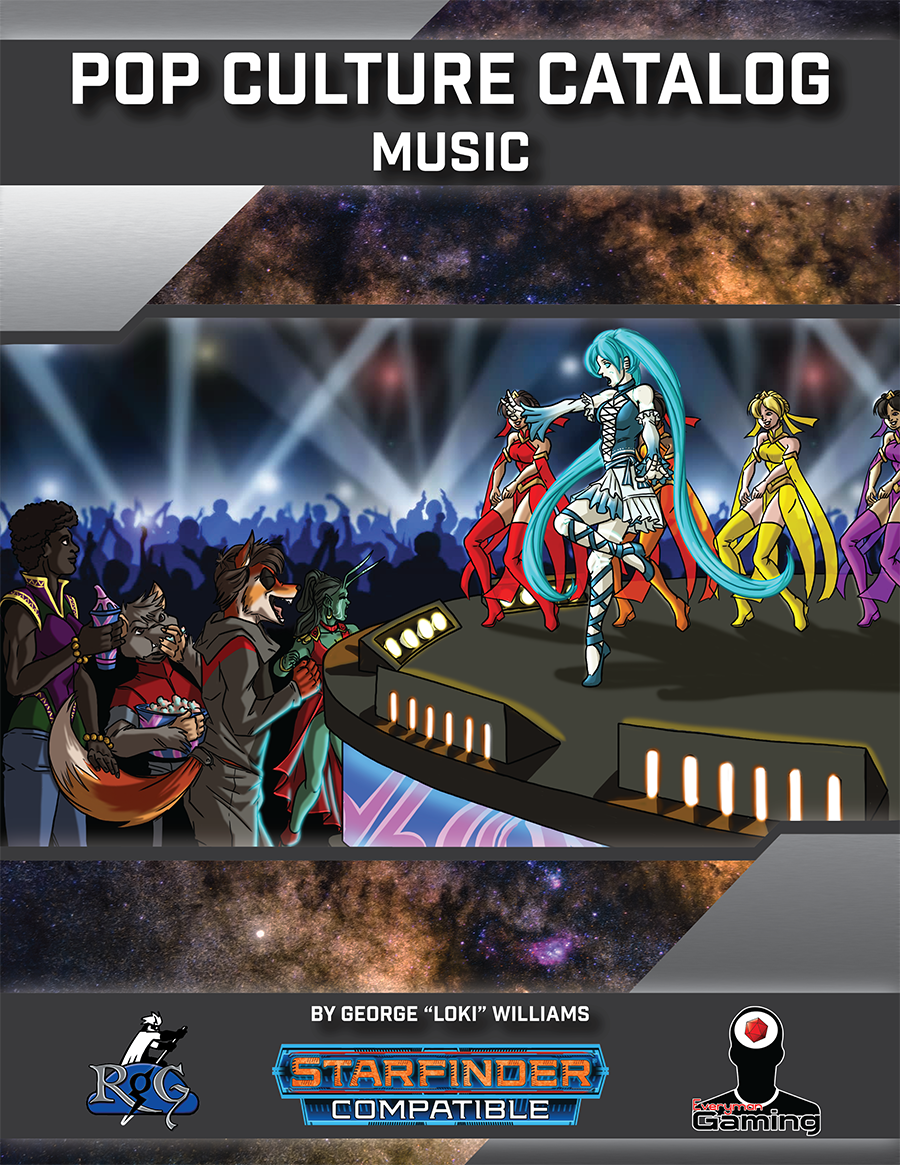 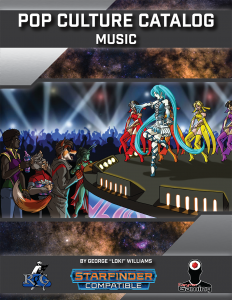 This installment of the Pop Culture Catalog-series clocks in at 25 pages, 1 page front cover, 1 page editorial, 1 page introduction (which also explains the elegant fandom rules that provide the basic rules-frame of this series), 2 pages of SRD, leaving us with 20 pages of content (21 if this is your first PCC and you didn’t know the fandom rules), so let’s check this out!

This review was moved up in my reviewing queue as a priority review at the request of my supporters.

So, there is one folder on my HD that is larger than the one for RPG books. That would be music. No surprise there; similarly, nobody should be surprised that goth and industrial music, all kinds of metal, and similar genres make up a lot of the bands and artists I listen to. However, I also tend to be inordinately fond of (neo)folk, punk, dark country, doom jazz, and similarly weird genres; from synthwave to noise to neoclassic acts, I have soundtracks for pretty much everything I write. And yes, this means I listen to different music when writing reviews for SFRPG than when I’m e.g. reviewing dark fantasy.

What I’m trying to say is this: Music is extremely important to me; and yet, much to my chagrin, a lot of games, in spite of the eminence of bards in many fantasy RPGs, don’t really seem to think about *WHAT* kind of music is actually being played. And no, restrictions regarding instruments do NOT count; look no further than acts like Wardruna, Heilung, or the OST for the Banner Saga games for some great rebuttals to the notion of the limitations imposed by a narrower range instruments. As such, I was inordinately excited for this particular installment of the Pop Culture Catalog-series, but also filled with trepidation. Because the vast range of styles already existing would be daunting to adapt and cover, much less provide the extrapolation to the Xa-Osoro system that made this series so incredibly gratifying for me.

So, how does this pdf proceed to present music, in a written form, which we can’t actually, you know, hear? Well, we start off with a massive list of music styles in the Xa-Osoro system, Contextualizing e.g. Neoclassical as music that was popular pre-Nova Age, which is one smart move.  I was happy to see Dark Country recognized (Those Poor Bastards fans out there?), though I have to mention a somewhat weird phrasing that might be a typo: pretty sure it should be “murder ballad”, not “murder ballod”; but the sentence proceeds to note that a dark country song isn’t considered legit without two of them. But…aren’t they…I don’t know, songs in their own right? Is “ballod” a futuristic instrument I’m not aware of? It might be, but then again, in the explanation of the sound, it’s not listed, so not sure there.

We have electronic genres like ambient and electro hop (which is pretty much what you’d expect), and also new genres like photon; of course, the big ones like trance and techno are around among the electronica as well; Hip Hop, martial, a couple of jazz variants and folk are also presented. The latter includes traditional music, which has two “$$”-page reference remnants; not a big comfort detriment, but worth mentioning. Of course, genres like Astrofunk and Psycho Disco aren’t missing from the pop genre, and interestingly, it should be noted that these are not just “spaced up” versions of classic genres.

Of course, punk is still not dead in the Nova Age, and from bardcore (XD) to glitterpunk and skitterpunk, this section really made me want to hear the music; You know, because for *real* skitterpunk, you just need those extra arms to handle the quadritars properly, and mentioning traditional bellyglubs reminded me of my fondness for combining e.g. throat singing with modern music. Of course, good ole’ rock and metal exist, and with Industrial and Nova Wave (clever New Wave reference), all of my favorite subgenres are covered.

Xaos uses expressive use of noises instead of traditional instruments and harmonics. The book also covers the different recording techniques, and provides an EXTENSIVE list of music tradition by species, covering the core species, AA1, and yes, several of the Star Log.EM-species and also those from the Starfarer’s Companion.

But this is about fandoms, and I haven’t yet talked about them, right? Well, this time around, the respective artists list their origin, the genre, label (yes, labels are covered!), the active time frame, a member list, and the greatest hit and the album it’s sourced from, as well as the release.

Unless I have miscounted, there are 21 artists, and I obviously can’t cover them all in this review without bloating it to a point where it becomes a rehash, we have e.g. Tarbok, an agender kasatha guitarist known for #MutantSchool (get the reference), who is a master of the “neoclassical guitar, able two monofilament guitars simultaneously.”[sic!]; pretty sure there’s a “to play” missing here. So yeah, there are a few minor glitches, which is relevant, because the writing is so good, it sometimes made me actually shiver a bit, picturing the act described. The fandom perks run the classic gamut of very situational untyped bonuses and less situational typed ones, including options to spend Resolve for improved benefits, but these more powerful effects are held in check by either a daily limit, or one tied to 10-minute rests to regain Stamina. For example, an untyped +2 bonus to Diplomacy checks vs. vesk and skittermander due to your fandom of Configuration 9 is sizable but requires the Stamina-replenishment based cooldown.

If you’re into the classical opera “Chorus of the 13th Heaven”, you instead gain a +1 enhancement bonus to Mysticism; not all of these checks are in line, though: T-Punk band Banner Noir nets you a +2 untyped bonus to Intimidate vs. law enforcement and government leaders/employees. That’s a lot of targets in some campaigns, or next to none in others; it’d apply to pretty much everybody in “Against the Aeon Throne” but would be much less useful in “Dead Suns”. It also doesn’t have the cooldown caveat, which bothered me a bit. Akari, the vanar’s fandom perk nets you a “+2 bonus to Diplomacy checks to Make an Impression”, which, last time I checked, wasn’t a thing in SFRPG. PF2? Yep. SFRPG? Nope. There is also one fandom that nets you a “+2 to diplomacy[sic!] checks made against xaursi…”, a comparatively rare species; compare that to the same bonus applied to two more common species. Both perks have the same cooldown caveat.

On the plus-side, going to 3rr0r (a Xaos act consisting of kobold Badaboom and his lifepartner, the goblin Gaz, and between 3 and 30 other Xaos musicians) lets you reduce the DC of hearing-based Perception checks by 5. OP!? Horrible!? Nope. Opposed checks are exempt. Still, this is much more useful than a couple of others.

On the plus side, the pdf brims with creativity when it comes to the acts: The glitterpunk band Human Drag, for example, only performs during full moons. Why? They are all therianthropes, using their transformed forms as a kind of stage costume. They btw. include a dwarven werebear, a wereraptor, an android weretiger (!!) and a nuar werewolf. Neat: This one has a benefit for those afflicted with the therianthropy corruption, or those wishing to resist its effects. And yes, it is explained how they can keep from attacking their fans. Of course there also is a kyubi kitsune star, and we are also introduced to MC Anvil; if you go to the right band’s moshpit, you’ll become better at squeezing…there are quite a lot of cool and evocative angles here.

Editing and formatting are okay, but not as tight as usual for the series in either rules language or formal departments, which is a bit of a pity, since the prose is genuinely fantastic. Layout adheres to the series’ two-column full-color standard, and the pdf sports a nice, original full-color artwork beyond the cover. The pdf has no bookmarks, which is a bit of a comfort-detriment.

George “Loki” Williams is a genuinely talented author, and it shows here; I can *almost* hear the sounds of these bands, in spite of quite a few of the instruments, well, not really existing (yet); like many of the PCC-installments, I LOVE the lore and flavor, the realistic, yet hopeful tone these pdfs display.

The design aspects do not live 100% up to these lofty heights, with some options being simply comparatively better than others, even when establishing a parity would have been easy due to the bonuses being structurally identical. As you’ve seen above as an excerpt, there are also quite a few editing glitches in the file; from minor formatting hiccups to a verb missing or a bracket not being closed, the supplement needed a firmer hand regarding editing, both on a formal and rules language level, which is uncommon for both the product line and the publisher.

That being said, I do consider this to be a worthwhile investment; for the low price, you get some genuinely amazing flavor that will send those creativity impulses firing through your neuronal network. The writing, the ideas—they are top-tier, and they are, ultimately, what makes me round up from my final verdict of 3.5 stars.  If you are primarily in it for the rules, you may want to round down instead.

You can get this pdf here!

You can directly support Everybody Games here on patreon!

If you considered this review to be helpful, I#d appreciate a tip or joining my patreon. Thank you.