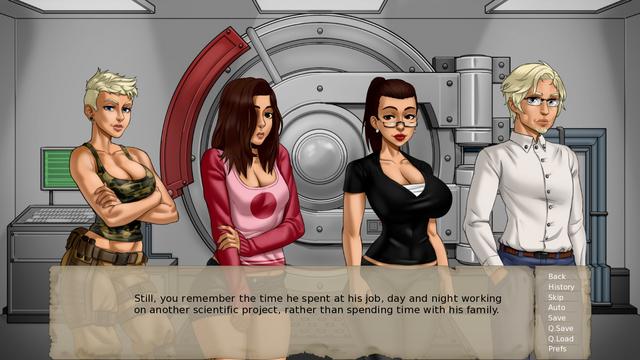 Seduce or corrupt the inhabitants of a nuclear shelter in Winterlook Games’s S.H.E.L.T.E.R. - An Apocalyptic Tale, a choice-driven visual novel now available on Steam.

S.H.E.L.T.E.R. - An Apocalyptic Tale follows a small group of survivors that were granted access to a nuclear shelter when the bombs fell. Though the circumstances seem dire, living underground isn’t as terrible as it may sound: the shelter is exceedingly comfortable and has enough supplies to last a century. You get to spend a lot of time in there, together with a group of lovely women and your scientist friend, Oscar.

As it turns out, the world above doesn’t remain uninhabitable for very long. When one of the last remaining water filters requires maintenance, you become the first to leave the shelter, even if only for a moment. Thanks to a special suit, you remain safe while outside and discover civilization already rising from the ashes, crude as it may be.

Oscar isn’t very fond of the news, though: he predicts the few people remaining within the shelter are the last ones that can be considered unaffected by the radiation. In his eyes, it becomes the team’s responsibility to pass on their genes. Since he himself is no longer fertile, he requests your aid instead: either seduce or corrupt the shelter's female inhabitants so that they will agree to bear your children. No matter which means you choose, you can count on his aid.

S.H.E.L.T.E.R. - An Apocalyptic Tale originally released in November of last year as an early access title. Since then, the game has grown with the inclusion of many new events. With the addition of the final story sequence and its two endings, the game is now complete, with its early access period officially being over.