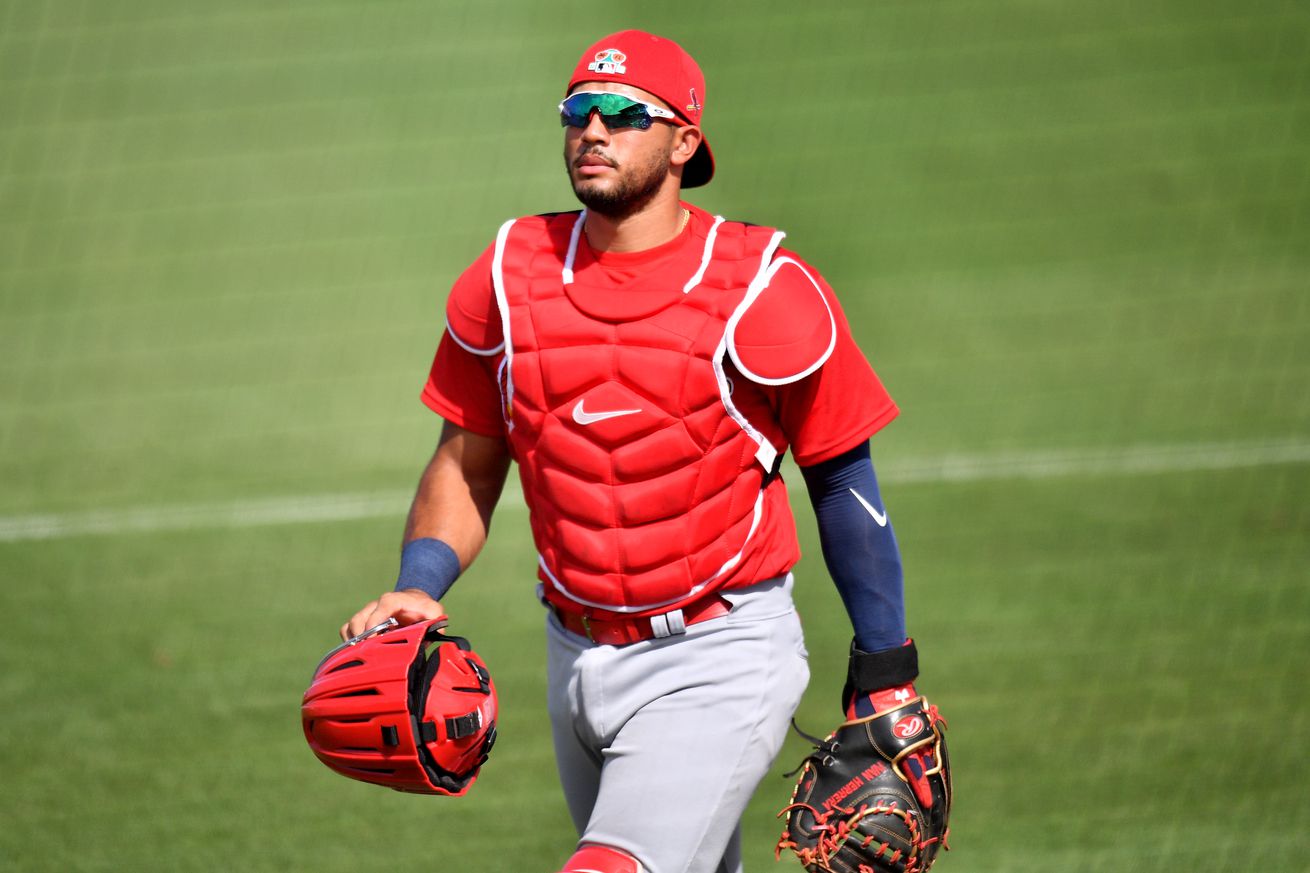 Here are a few candidates I think whose numbers will massively improve.

Back in 2018, Dylan Carlson had what appeared to be a solid, but unremarkable season split between Low A and High A. He was an average hitter in a full season in Low A the year before, so the Cardinals had him repeat the level to begin 2018. They were obviously on the verge of promoting him to High A anyway, because just 13 games into the season, he was promoted to High A. He finished the year with a 112 wRC+ with a good walk rate, above average K rate and a .138 ISO. Doesn’t seem like anything special.

But I neglected to point out the most important number that year: his age. He was 19-years-old. He was playing in the toughest pitcher’s park the minor leagues has to offer and he was an easily above average hitter. The next year, he would spend his age 20 season at AA, in a favorable hitting environment with a home park where lefties thrive. Dylan Carlson’s breakout 2019 was extremely easy to see coming!

So what players in the Cardinals system will have a breakout season? By the way, when I say breakout, I do not mean they necessarily become a significantly better prospect. That usually comes with the territory, but it’s not a given. I really just mean they will have a jump in their stats that wouldn’t immediately be obvious given their history. A guy like Carlson who posted marginally above average hitting rates, and if you ignored his age and the difference in parks he was playing at, you wouldn’t be able to envision the future 142 wRC+ hitter at AA. Guys like that.

Yeah I put up that prospect disclaimer for a reason. Herrera doesn’t really have much left to jump as a prospect. He’s already a top 100 prospect by some sites. He’s “arrived” so to speak in the prospect world. He’s also kind of already “broken” out, because he had a 136 wRC+ back in Low A. But doing that in Low A and doing that in AAA are very different things and Herrera has been a lot more mediocre since then.

This is where context is important. Because he seemingly has settled into an average hitter, posting a 102 wRC+ in High A and a 104 wRC+ in AA. That may very well be what he becomes, but I don’t really think either of those lines tell us that. Extenuating circumstances and whatnot.

Because Herrera being average at hitting was huge. He spent a grand total of 18 games above Low A coming into this season, 18 games where he was essentially average. He’s also just 21-years-old. And how he was average matters too. He posted a high walk rate (13%) and a reasonable K rate (22%) along with some decent pop (.176). Where his season turned average was his below average BABIP (.261). This placement is a gamble that his BABIP will improve. And he’ll also be spending his time at a level where it’s not a super aggressive placement. Palm Beach at 19-years-old is aggressive. Springfield this year was fairly aggressive. Memphis will not be, and I think he’ll adjust faster.

Is it weird to place him here and not believe in him as a prospect? Because I think he could very well break out and still not at all believe he’s going to be a guy who gets anything more than a cup of coffee in the majors. Whalen to this point has been a 1B with no power, which is a death sentence. With the exception of rookie ball, he posted a career high in ISO in High A this year. And now he’s going to Springfield. And he’s a switch hitter so he gets the left-handed boost. Call it the Daniel Descalso effect. Lefty in Springfield is generally a good bet.

This is an easy one. This is not quite as easy as Carlson was, but it’s close. And when I say easy, i mean don’t even give me credit for predicting it if it happens. Totally give me credit for Whalen, but Nunez is what these lists are made for.

Let’s just look at his history. In 2019, he was aggressively promoted to Low A to start the season - mostly because it was the lowest level of full season ball and they wanted him to play competitive games in April - and he tanked. Hard. He had a 36 wRC+ in 21 games before they demoted him to rookie ball. He was average there.

This year they sent him to High A. He wasn’t even slightly good at Low A or something resembling like it looked like he could handle the league and they sent him to High A this year. He had a 120 wRC+ in just 151 PAs. They then promoted him to Springfield, where he spent most of the year. He struggled but managed to hold his own to the tune of a 91 wRC+. Not great, but before this year, he was just a little above average at Johnson City, so that’s quite the leap. Now he’s got some reps in AA, he’s a year older, and everything’s in place for him to explode into a full blown prospect.

The early returns on Holgate were... not great. But if they were, he wouldn’t qualify for this list. Feel free to ignore the stats. Unlike the rest of this list, where I look at the stats, place them in context, and can easily see how they could massively improve without necessarily the player specifically getting better, Holgate’s stats are nothing but bad news.

Call it a gamble. Holgate would normally be placed in State College or Johnson City, and by normally I mean before they eliminated the lower levels of the minors and meshed it into a complex league. They wanted him to play in actual baseball games instead of that, and sent him above a level where he was ready. Pre-minor league destruction, Holgate would have had a solid if not good season in short season A and we’d have reason for optimism next year. So that’s how I’m choosing to approach his 2021 season, that he was sent to a level he was not quite ready for, and will benefit from his experience. Also it’s Palm Beach now and that just sucks for hitters.

Alright before I continue, feel free to ignore the rest of this article, because I feel like I have a decent sense of the hitters just looking at numbers. That... is not true for pitchers. For pitchers, predicting breakouts is more about scouting the stuff. I don’t know the stuff. I’m literally just looking at stat lines. I think you can get away with that with hitters, because the approach is in the stat line. Not really a thing for pitchers. So, again, rest of this can be ignored, these are true guesses.

Pitchers also happen to be harder than normal because I can’t really make any environment based predictions. Instead of a Low A player going to an extreme pitching environment, a player is leaving that to go to a normal pitcher’s park. A player in High A gets to go to Springfield. That’s never a good prediction. And anybody with good stats at AA feels like they kind of already broke out. They’re also entering another hitting environment that will come with its own challenges in AAA.

Okay I have to believe on this one. Whether or not Thompson can rebound, one thing is clear: it was a very, very bad decision to send him to AAA. He was so obviously not ready. It seemed - to me - like a crazy decision - and it so did not pay off. He already looks better in the AFL. He should be better if for no other reason than it’d be hard for him to be worse, but I’m including him on this list, because I think he will actually be good.

His timing could not be worse. He spent the 2019 season as a 24-year-old in High A. His stats are solid, but nothing special. He got a cup of coffee in 2020 because the Marlins had a COVID outbreak, and then the Cardinals claimed. This year was a lost season. I’m basically gambling that there’s a reason the Cardinals claimed him and that he has unlocked potential as a reliever. He’s also 6’9 and frankly I want a 6’9 guy in the bullpen. This one is wishful thinking, no doubt about it.

Honestly guys, the only pitchers I can really pick are guys who have no control. Like nobody had control in the minor leagues. I wonder if the missed season is responsible. In any case, I’m going with the guy who struck out 26.5% of batters as a 20-year-old in Low A. Again, I’m going to be leaning on the “clearly was playing in a league above what he should have” for this.

Can I take the equivalent of a gimme here? He actually didn’t really look that great in the very limited amount of innings he pitched. Not bad either. Just not great. I don’t think I need to justify this one.

Alright and that concludes the 2022 minor league breakout stars. I feel pretty good about my hitting selections. I feel awful about my pitching selections. But I didn’t want to ignore pitchers. But seriously, every pitcher I was about to pick just had an unfathomably bad BB%. Looking at you Levi Prater. If Prater breaks out, I’m going to be happy but slightly peeved at myself for removing him from this list. His numbers don’t look super hopeful though.

Any candidates that I haven’t mentioned that you just have a feeling are going Nick Plummer their 2022?