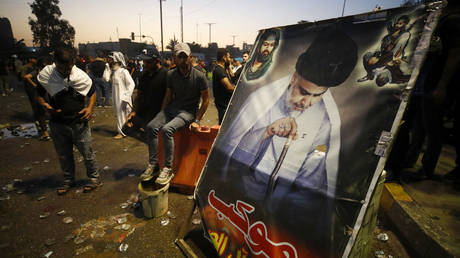 Iraqi cleric Muqtada al-Sadr announced a hunger strike on Monday evening, calling for an end to political violence. More than a dozen people have been killed in clashes between Sadr’s followers and rival militias in Baghdad, after no agreement was reached on the new Iraqi government and the Shia cleric said he was retiring from politics.

Al-Sadr intends to continue the hunger strike “until violence and the use of weapons in the country stop,” said Hassan al-Adari, head of the Sadrist parliamentary bloc, adding that the righteous struggle against corruption “does not excuse the use of violence.”

The 48-year-old Shia cleric said he would retire from politics earlier on Monday, citing the ongoing parliamentary deadlock and lack of reforms. His followers reacted by storming the presidential palace.

An unverified video of a helicopter evacuating some US embassy personnel appeared on Twitter amid reports of clashes between Sadrists and rival militias. The White House has denied all reports of an evacuation, however.

The US embassy employees have been evacuated from the #Green_Zone by the helicopter.#Baghdad, #Iraq pic.twitter.com/HLZerzb0ja

As night fell on Baghdad, gunfire continued. At least 12 people were confirmed dead in the riots. There were unconfirmed reports of artillery fire in the “Green Zone” and the activation of the US embassy’s point defense systems.

The neighboring Kuwait called on all its citizens to leave Iraq, citing the safety situation. Kurdish militias in the north of Iraq were reported to be on high alert for possible attacks by the remnants of Islamic State (IS, formerly ISIS) terrorist group.

Sadr’s party won 73 seats in Iraq’s 329-seat parliament in last year’s election, but haven’t been able to form a governing coalition. His parliamentarians resigned in June and called for a new election. Meanwhile, they continued to occupy the legislature in order to prevent another Shia faction – which Sadr accused of being too close to Iran – from forming a government.

This is not the first time Sadr has announced an exit from politics, only to change his mind later. The cleric rose to prominence after the 2003 US invasion of Iraq, first applauding the overthrow of President Saddam Hussein, then denouncing the US occupation. His political movement has a military wing called the “Mahdi Army.”