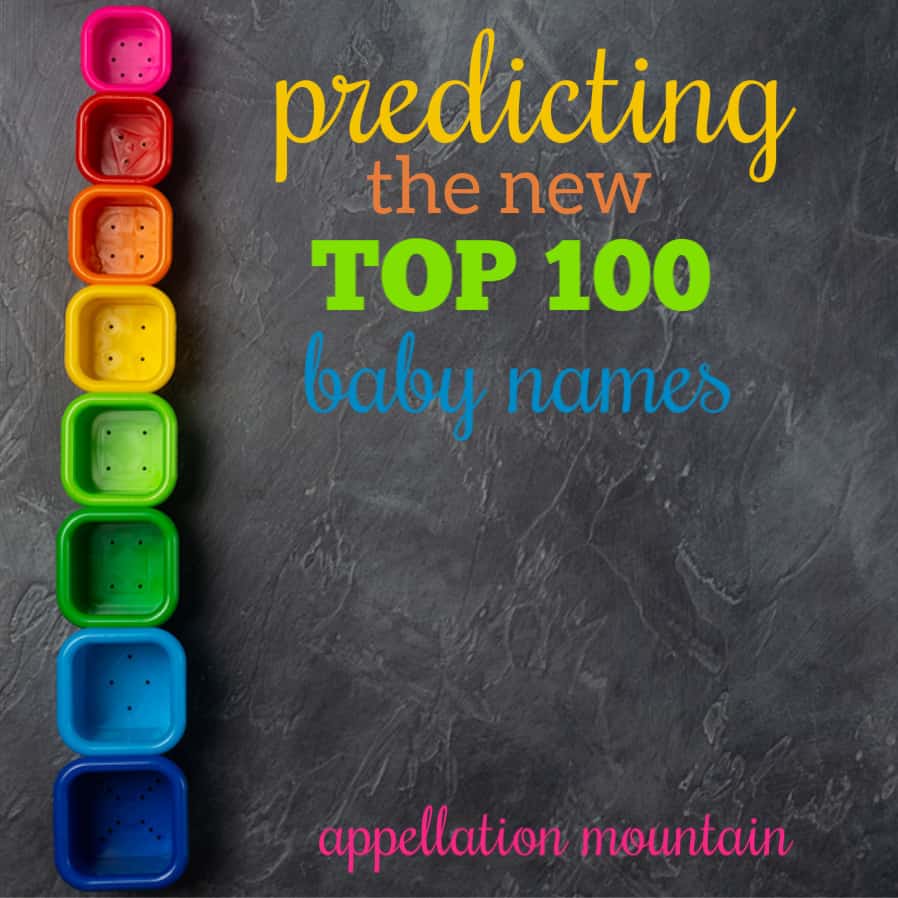 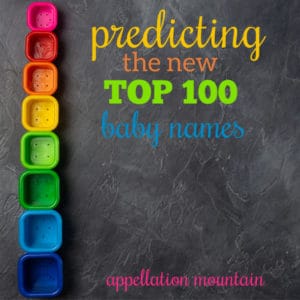 Today I’m taking my shot at predicting newcomers to the list. These are already popular picks that haven’t cracked the double-digits … yet. But I think we’ll see them when the new list of 2018 data is released in May 2019 – just a few weeks from now!

No matter how much we love Game of Thrones, Khaleesi won’t soar into the US Top 100 for girls – not this time, anyway. It takes a few years of steady gains for even overnight sensations to really catch on and then appear in the data. After all, many of us choose our kids’ names before we’re expecting. So that favorite name you picked in 2017? Maybe you won’t be using it until 2020 – or later.

So I’m only looking at names within the current Top 200 – striking distance of the list.

On to the names I’m watching now!

For the girls, three of last year’s favorites remain: Ivy, Isla, and Josephine:

At first glance, these names are very different – an Elizabeth nickname and an ancient goddess. But they share a feminine style with a certain steely backbone. I can’t imagine Eliza or Athena as a pushover, can you? Both have marched straight up the popularity charts during the twentieth century, making them my two newest predictions to join this year’s US Top 100:

My dark horse prediction for a girls’ name to enter the Top 100? Emery.

Maybe it shouldn’t be a dark horse. It’s a midpoint between traditional Emily and on-trend Avery, a name that mixes up lots of appealing sounds. Except there are SO many ways to spell this name: besides Emery, there’s Emerie and Emory in the Top 1000, and Emmarie, Emeri in use, plus A- versions, like Amerie, all possible, too.

Do all of those spelling options signal a fragmented name that will never quite catch on … or the next big thing? With choices like Hailey and Peyton falling in use, there’s plenty of opportunity for Emery to climb. It ranked #115 last year – not bad for a name that didn’t even chart back in the year 2000.

Now, on to the boys’ side! I’m still watching two of last year’s predictions:

I’m guessing on three new additions to the Top 100 this year. It was tough, because there were lots of similar choices. Ultimately, I’m betting on Weston over Wesley and Bennett over Emmett. But it could easily end up the opposite!

Ready for my out-there pick? It could be a brother for last year’s dark horse, Maverick. I’m nominating Ryker. It feels like a surname, and perhaps it sometimes occurs as one. But this name didn’t get much lift until the late 1980s, when we met William Riker, second-in-command to Jean-Luc Picard on the SS Enterprise on Star Trek: The Next Generation. Riker spells it with an ‘i’ but it’s the ‘y’ version that caught on in a big way. Now Ryker sits at #131, just a notch beyond the Top 100 – for now.

What do you think of these guesses? Are there any other names that seem to be trending in your circles? 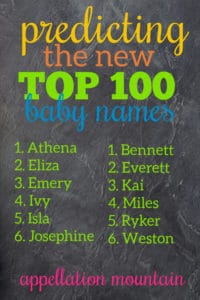 The post Predicting the New Top 100 Names of 2019 appeared first on Appellation Mountain.