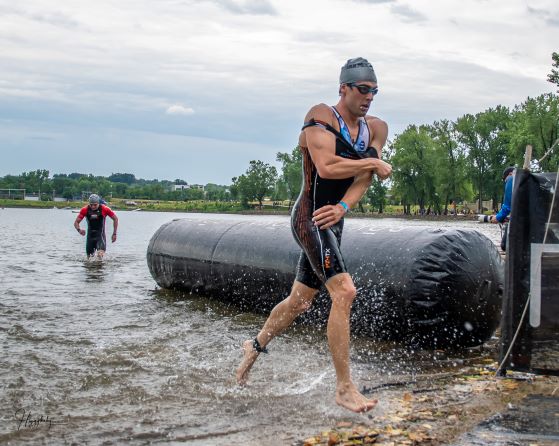 Des Moines, Iowa has hosted professional and age group events for many years and every time I’ve raced there it’s been very hot and humid. The inaugural Ironman 70.3 Des Moines offered more of the same, but had an added issue: thunderstorms. Race organizers took notice, and the night before the race they decided to delay the start by an hour. Even the night before the race it became pretty clear that we were not likely to be racing the full 70.3 distance, and perhaps not racing at all.

Here is how I changed my race morning prep (mental and physical) when faced with an uncertain race day.

Prepare for the Worst

It’s a worst case scenario, but I tried to be mentally ready to hear that the race would be canceled entirely. In the grand scheme of things, it’s just one of many races, and if the weather isn’t safe for racing, we don’t want to be out there, anyway. My friends and I had already decided that if the race was canceled we would get in a good training day (after the weather cleared) to make the best of a bad situation.

Plan for Anything at all … and Nothing in Particular

There are an infinite number of ways a race can be shortened or changed to accommodate a weather delay. It’s easy to feel sorry for yourself if your favourite leg of the race is shortened, but that certainly isn’t going to help your performance. Get into the mindset that you’re ready to crush the race, no matter what the format is – it is the best way to set up a successful day in an uncertain situation.

We had no idea when the race would start, so I brought a lot of extra snacks and fluids to stay topped up on calories and hydrated all day. Simple carbs are very important to keep glycogen topped up, but an easily digestible protein source is also necessary to stay satiated. I had BodyHealth Perfectamino tablets to keep some amino acids (protein) coming in without having to deal with the gut challenges that many protein sources cause. I drank EFS sport drink for hydration and carbs, and snacked on white bread for some additional carbs.

The race was postponed a second time, but this time they had a plan. We would start at 9:30 am, do the entire 1.9-km swim, a shortened 43-km bike, and the entire 21.1-km run. The run was now longer in duration than the bike, which is very unusual. I increased my power target for the ride by about 20 watts to accommodate for the shorter distance, but also committed to holding back on the bike. I knew the run would be far more important on the day and a lot more effort for a little less time on the bike wouldn’t be worth it.

In the end, I had a good day and came away with third. We were all very lucky that the weather cleared, and Ironman did a great job to create a shortened race option that fit the situation we were in. There were smiles all around after what could have become a long-run training day in the rain.