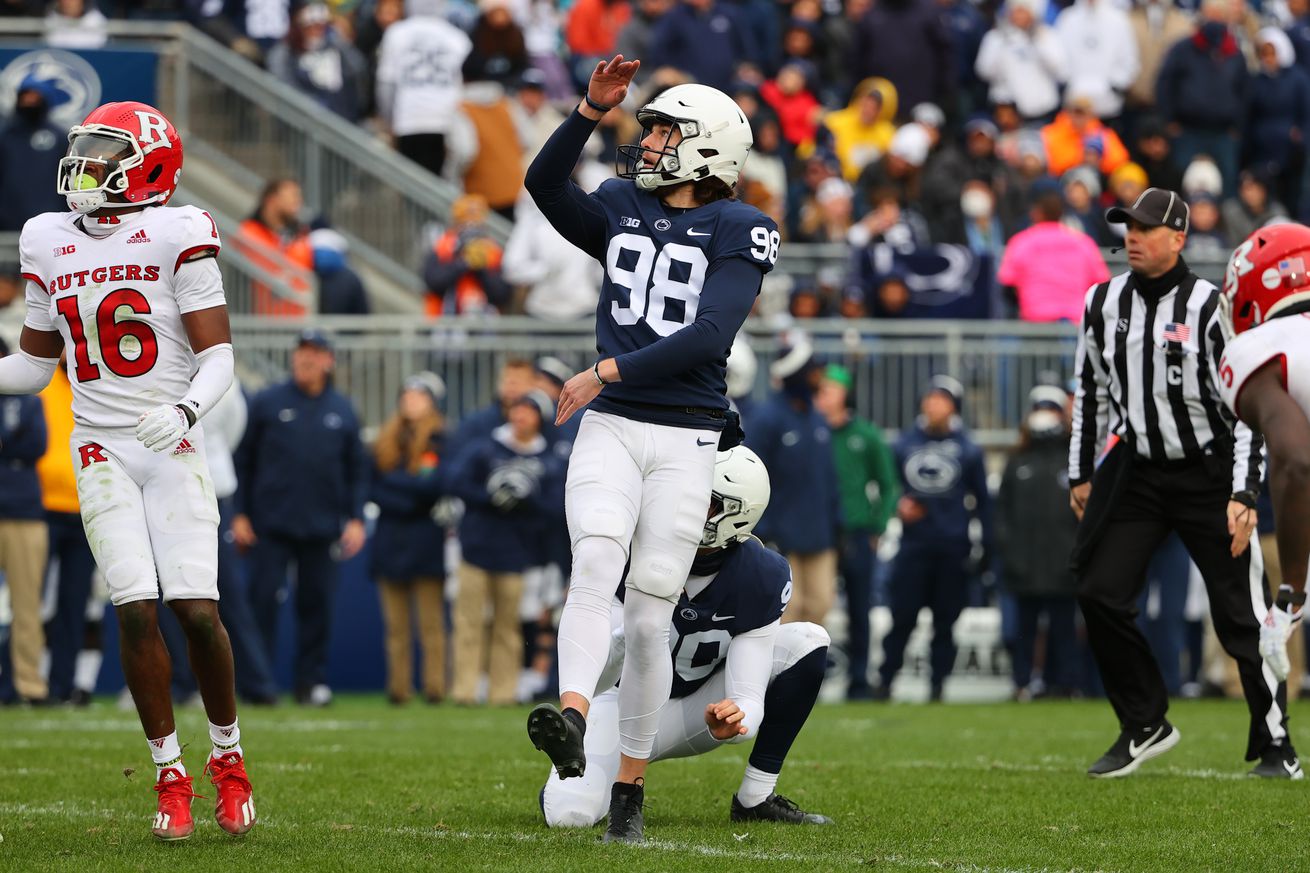 Punting is Winning: A Changing of the PISS Guards

Jordan Stout does the unthinkable

This was a pretty awesome week for special teams. Four punters had a 41+ PISS, including two with a 43-something. Three kicks were returned for touchdowns, and five field goals were made from 40+, including two from 50+, all in the same game.

*For those not in the know, the Punting Index System Score is a metric developed by OTE commenter Ardichoke and myself to quantify greatness in punting. There are multiple systems to rate quarterbacks; we’ve developed a system to rate the most important position. For reference, an average PISS is about 35. For more information including the formula, read the related article.

Overshadowing all that is the news that, after weeks of closing the gap, Jordan Stout has taken over as the season PISS leader. His 41.639 this week raised his average to 41.193, and Korsak’s 36.036 lowered his to 40.743. Does this change my Ray Guy vote? I’m not sure! I might re-evaluate when finalists are announced, but for the moment, I’m gonna say no. Read my Ray Guy semifinalist article for an explanation on why, PISS aside, Korsak appears to be the run-away favorite (at least on paper). But man, Stout is certainly making a case.

Punter of the Week

This is a tough one. First, I want to talk about Tory Taylor. Taylor has, as I’ve run it, the highest PISS this week, at 43.228. However, that does not include his fumbled snap. Should it? On one hand, this is all way easier if I’m only counting actual punts. On the other, isn’t PISS a punting unit grade? If it includes return yardage and penalties, shouldn’t it include this? Also, as an aside, there was a punt by Minnesota which resulted in two unsportsmanlike penalties after the play; these did not count against Crawford’s PISS, as they were dead ball fouls (live fouls, on either side, are taken into account).

Tentatively, I’m going to not count it, but I’m also not giving Taylor POTW. Instead, I’m giving it to the guy who had the biggest week, and that’s Jordan Stout of the Penn State Nittany Lions. Stout had 8 punts for 339 yards, landing 7 inside the 20 (two of which were inside the 5) with no touchbacks. His 41.639 PISS was only the fourth-highest of the week, but as mentioned above, put him into pole position for the season. His game was also an insane punters’ duel, as his counterpart Adam Korsak punted 10 times, including this beauty.

James Franklin said Adam Korsak may be “the best punter in the country.” He’s showing why so far today pic.twitter.com/cuCOBXcy1K

That punt aside, Korsak didn’t have the best day. I mean, he had a 42.8 yard net average with no touchbacks, but he only got 4 of 10 punts inside the 20 because he was constantly kicking from his own redzone. And not only did he give up the season PISS lead, he also got passed for best individual punt, thanks to this scorcher by Bryce Baringer:

That scored as a 78.022, surpassing Korsak’s 76.943 from Week 2. Word of advice from someone who hasn’t played a down of football in 14 years: if a ball is rolling past you at the 16, you should probably pick it up. The potential loss of four yards from a touchback is worth the realized loss of 14 here. The Michigan State punter had 9 punts with a 46.7 yard average on the day, landing five inside the 20 and one inside the 5 with no touchbacks. His PISS was 41.907.

Ohio State’s Jesse Mirco had a single punt which traveled 50 yards and scored a 43.188.

Returner of the Week

With three kick return touchdowns on the day, it’s hard to choose just one guy to win this award. Wait, no it isn’t! One of them was my guy! Charlie Jones took a kick return 100 yards to the house after Iowa fell behind 10-0, giving the Hawkeyes the kick in the pants they needed to go on and defeat the Bert-less Illini 33-23. He finished the day with 144 yards on 3 kick returns, and 18 yards on 7 attempted punt returns.

What a response from @HawkeyeFootball pic.twitter.com/j05N3ILTwX

Wisconsin’s Stephan Bracey had 138 yards on three kick returns, including a 91-yard touchdown on what was evidently his first touch of the year. This is also good. Well, it’s impressive. I would have preferred if it did not happen, so maybe good isn’t the right word.

Any one of those could have been returner of the week any other week of the year, but I’ll defer to the guy with the most return yards on the day just cause.

Kicker of the Week

Opposite McCourt, Caleb Shudak went 4/5, hitting from 51 and missing from 58, adding three extra points and totalling 15 of the Iowa Hawkeyes’s 33 yards. Maybe if Brian Ferentz wasn’t calling a an off-tackle run from the shotgun every third-and-long, it would’ve been a make from 50 instead of a miss from 58. He also hit from 48.

Only Jake Moody was also perfect on the day (min 1 fg, 1 xp attempt), totaling 8 extra points and a short field goal for 11 of Michigan’s 59 points.

Punting is Winning: A Changing of the PISS Guards