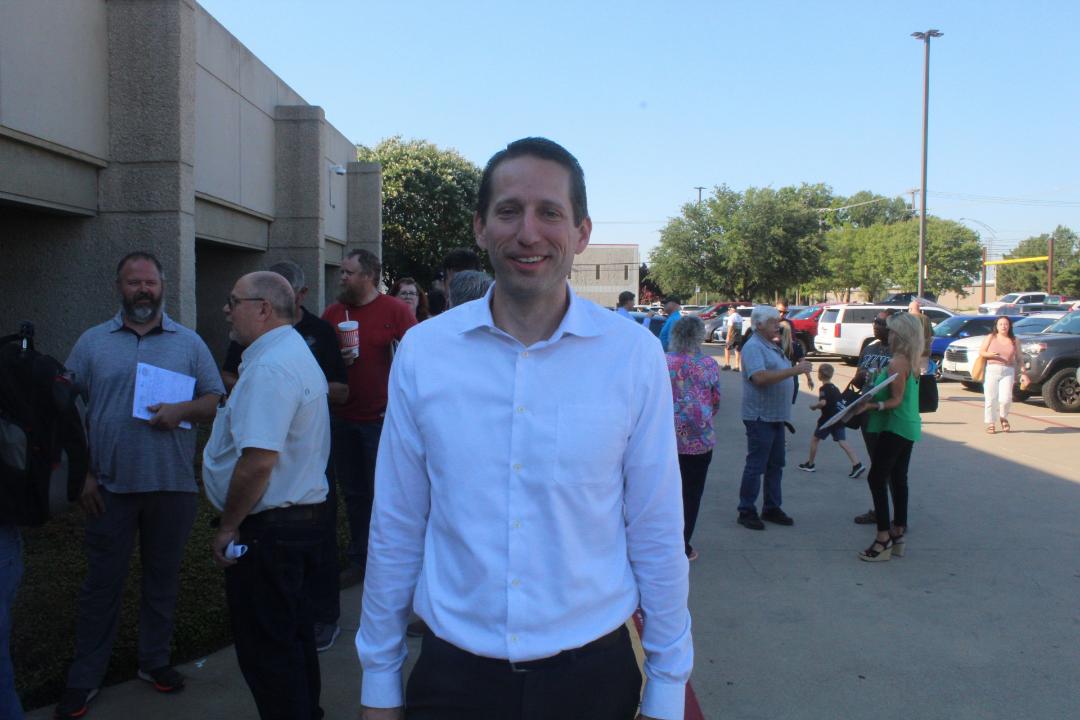 As a large line of local homeowners began chanting to be let into the Eastside headquarters of the Tarrant Appraisal District (TAD), Realtor Chandler Crouch, calm and upbeat, slowly made his way through the crowd. He thanked the homeowners for showing up Thursday morning for a special meeting and chatted with them about the importance of fair and transparent operations at TAD.

Inside the building, Crouch was the topic of debate for the appraisal district’s five board members plus chief appraiser, Jeff Law. At issue was a May letter sent by Crouch’s attorney that said TAD was violating Crouch’s First Amendment rights.

TAD has a problem with the Realtor because, for the past couple of years, he has been volunteering his time helping thousands of Tarrant County residents protest their property valuations. Between 2015 and 2019, the number of formal protests in Tarrant County rose by 170%, based on TAD data, and local protest rates were far higher in Tarrant County than in other large Texas counties.

Last fall and winter, TAD’s director of residential appraisal, Randy Armstrong, filed four complaints against Crouch with the Texas Department of Licensing and Regulation (TDLR). As the regulating licensing authority in Texas, TDLR could potentially revoke Crouch’s Realtor’s license if an investigation by TDLR validates Armstrong’s allegations. In early June, TAD’s five board members, without voting, assigned Chief Appraiser Law to investigate whether Armstrong’s complaints against Crouch violated any of TAD’s policies.

In Armstrong’s complaints, he argues that Crouch acted inappropriately when helping residents. Armstrong sent the letters from TAD’s headquarters and referenced sensitive information that would be accessible only to a TAD employee. If Armstrong sent complaints outside of his official capacity as director of residential appraisal, then he potentially violated multiple Texas administrative codes.

Several Fort Worth police officers and Sheriff’s Department deputies barred several credentialed members of the press, myself included, from entering the building during the Thursday meeting.

Former TAD board member Gary Losada sat near the main entrance, resting his hip that he said will require surgery this fall. He stood up, gesturing his hand toward the long line of Crouch’s supporters to make his point. TAD leaders are violating the Texas Open Meetings Act, he said.

“Nobody is able to participate,” Losada said. “They could have held the meeting in the regular board meeting room that holds 50 to 60 people. Instead, they hold it in a room that holds 20. How do you make people wait in the heat? This is part of a pattern of coverups.”

Before Thursday’s meeting, one confidential source provided me with a copy of a new TDLR complaint, this one filed by former and current elected officials in Tarrant County who allege that Armstrong and Law violated several sections of the Texas Occupations Code when they went after Crouch last fall. Chief Appraiser Law has publicly stated that he did not know about the TDLR complaints against Crouch, but one email published by the statewide blog Texas Scorecard shows that Crouch described the complaints to Law last November.

“It is a violation for the TAD [board] to instruct Chief Appraiser Jeff Law to investigate” Armstrong because that creates a conflict of interest, part of the new complaint reads, referring to Law’s longstanding personal and professional relationship with Armstrong. “TAD’s board should conduct an independent investigation.”

In the letter, the public officials list six codes that restrict individuals from misusing their government title or public resources for private purposes.

Law faces allegations from the group of public officials that he broke several sections of the administrative code that deal with public officials engaging in acts that are “dishonest, misleading, fraudulent, or deceptive.”

In the letter, the public officials go on to allege that Law has known about the TDLR complaints against Crouch since October but failed to notify the board, which became aware of the complaints only when the letter from Crouch’s attorney was emailed to board members on May 12. Former board member Losada alleges that Law has a history of hiding embarrassing information from board members. In mid-2020, Losada overheard a conversation between Law and former TAD board member Michael O’Donnel in which Law suggested that a letter sent from a state senator should be hidden from board members. In her letter, Sen. Jane Nelson described her concern over the high number of protests filed by Tarrant County property owners (“Culture of Deception,” June 16).

Colleyville’s Nakamura said her reason for seeking public office was to ensure that government is transparent and accountable.

“For the last several years, Colleyville has been a driving force in many attempts to increase just that, transparency and accountability, from the Tarrant Appraisal District to the public and taxing entities they serve,” she said. “As an elected official, with all the attempts to better the management, I felt it necessary to join in this complaint.”

Colleyville Councilmember Dodson said in a phone interview there are several areas where TAD has lost the public’s trust. TAD’s five board members are elected by Tarrant County taxing entities, the term that refers to cities, school districts, and other governmental groups that are partly funded through property taxes. He said that system effectively means that the City of Fort Worth, Tarrant County, and Fort Worth and Arlington school districts can easily outvote small municipalities and school districts when installing board members who may not serve the interests of every taxing entity.

Armstrong’s actions would have led to his termination at any private company, he added.

“What he did was put the TAD organization in a position of them blaming Mr. Crouch for” allegedly inappropriate activities, he continued. Armstrong “used all kinds of internal information to make those claims. This appears to have been approved by the chief appraiser.”

TAD has a long history of failing to be transparent with the public, Dodson said, adding that he hopes the new complaint leads to significant operational changes at the appraisal district.

“Jeff Law took no action with the employee, nor did he inform Chandler Crouch or the TAD board of [Armstrong’s] TDLR violations,” the letter says. “Jeff Law has a legal, ethical, and TDLR obligation to report knowledge or belief that a crime has been committed at TAD to the proper judicial authorities. Jeff Law has failed to report the activity of Randall Armstrong utilizing public resources for private gain to the district attorney’s office.”

At the conclusion of Thursday’s special meeting, the board voted unanimously to send a letter to TDLR that states the appraisal district did not sanction Armstrong’s complaints.

The post Pushing Back appeared first on Fort Worth Weekly.