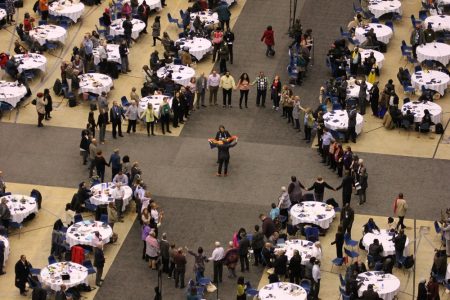 Progressives: Stay alive ’til this show is past

So here we are. General Conference 2019. The place where LGBTQ inclusion and exclusion in The United Methodist Church might find a step forward towards inclusion or find even more rigid restrictions on LGBTQ persons and allies.

The UMC was created in 1968 from the merger of the Methodist Church (see edit below) and the Evangelical United Brethren Church. It only took four years to add the first restrictions on LGBTQ people in 1972. It’s been a long season of exclusion in the church since that fateful Conference.

In the Broadway musical Hamilton, the long winter of battles between the British and American forces is captured in the song Stay Alive as Washington and Hamilton strategize how to prevail against a superior foe:

[Washington:]
There’s only one way for us to win this
Provoke outrage, outright
Don’t engage, strike by night
Remain relentless ’til their troops take flight

[Hamilton:]
Make it impossible to justify the cost of the fight

[Washington:]
Outrun
Outlast
Stay alive ’til this horror show is past.

This might reflect the experience of progressives and LGBTQ persons at General Conference 2019. Because it definitely feels like we are just trying to survive in a church that seemingly wants to legislate us out of existence.

The Traditionalists are incredibly organized

Over the decades, those opposed to progressive and mainline values have created numerous structures and organizations within and alongside United Methodism.

Through the Mission Society ( 1984  parallel to the General Board of Global Missions), Bristol House Books ( 1987  parallel to Abingdon), and the RENEW network ( 1989  tiny antagonistic group to UM Women), traditionalists created a parallel structure that provided books, women’s fellowship, and missionaries for congregations to support outside of United Methodist oversight, accountability, or connectional leadership.

Alongside these were numerous caucus groups: Good News Magazine (1966), Confessing Movement, Lifewatch, the Institute on Religion and Democracy, and others. Bristol Books became part of Asbury Seedbed a few years ago. And just before GC2016, the Wesleyan Covenant Association came about as well, to fulfill their part of the 2004 plan.

These organizations provide material and financial support to defeat progressive values and inclusive polity from being passed by General and Annual Conferences, as well as support for court cases to declare anything that sneaks through as unconstitutional and remove clergy that step out of line.

Finally, a few days before General Conference 2019 (and 2016), the Africa Initiative retreat (that was sponsored by Good News) included a reported 200 delegates from Africa and shared the conservative renewal groups’ messaging, voting guides, and process strategy with the delegates from Africa. Of course, Africa will vote independently as delegates from Africa, but the organized way the Traditionalist values were communicated in a retreat setting is undoubtedly effective.

In short, there’s no ambiguity: the majority culture in The United Methodist Church is conservative and their natural affinity to Traditionalist leadership is the best organized. While The UMC has many great progressive and mainline values in its polity and practices, it does so only after being deemed acceptable by this majority culture (or they just haven’t removed them yet).

The Moderates are trying to be organized.

As reported on Rev. Chris Ritter’s blog, the Uniting Methodists, a middle-Methodist or moderate group that has been taking the lead on passing the One Church Plan, had one of their strategy documents leaked.

I’ve seen bursts of hysteria on the Twitters, alleging it is trying to “control or shut down votes” and other comments. I’m sorry to say veteran GC people like me are unbothered by it. Since 2004, I’ve been involved in strategy sessions and seen strategy documents from all the caucus groups, progressive and traditionalist alike, and there’s nothing surprising about the document. In fact, it’s rather low level organizing, written for public dissemination. For people who support the Traditionalist Plan to be clutching their pearls over this document is to deny their side is doing the same things.

The bright spot for moderate organizing has been the Mainstream United Methodists which have put out a steady beat of solid articles and content supporting the One Church Plan. Another joy was several annual conferences where moderates organized with progressives to elect more moderate delegations in 2016 (like West Ohio and Alabama West Florida).

In short, for the first time at General Conference, moderates and middle-Methodists are organizing. It’s refreshing, but as with any inaugural effort, there will be missteps and apprehension at opposing the Traditionalist renewal group juggernauts.

The Progressives and LGBTQ are just trying to survive.

Progressives have been organized for a long time as well. Since the founding of the United Methodist Gay Caucus in 1974 (which would later become Affirmation) and the Reconciling Congregations Program in 1984 (which would become Reconciling Ministries in 2000), progressives have sought LGBTQ inclusion mostly by reducing harm: by watering down harmful legislation or inserting “agree to disagree” language. In recent years, LGBTQ groups like the Queer Clergy Caucus and Love Prevails have taken the cutting edge of witness to heart in public statements and protests.

While progressives are a minority party in United Methodism, creative minorities are able to carve out safe havens for LGBTQ people in United Methodism. The Western Jurisdiction has become a haven for progressives and LGBTQ persons to serve openly because accountability (as Wesley intended) is held at the annual conference level, among clergy peers. The constitutional separation of powers structure of The UMC allows for such diversity.

The purpose of the Traditional(ist) Plan is to eradicate those safe havens and instead encourage them to leave United Methodism. But even if it passes, it will be unable to remove accountability from the Annual Conference level. So it will be a non-starter to anything new in The UMC, just making like a little bit worse.

Without a truly progressive plan that affirms LGBTQ persons explicitly to rally behind, I see the task of progressives and LGBTQ persons at General Conference is to survive. To be alive at the end of this week. To have safe spaces, either carved out officially by the One Church Plan, or ones that the Traditional(ist) Plan can’t touch. And then we move on from there to whatever is next.

Thanks for reading, commenting, and sharing on social media.

The article "Progressives: Stay alive ’til this show is past" was originally posted on HackingChristianity.net. Please connect with the author UMJeremy on Twitter

Progressives: Stay alive ’til this show is past