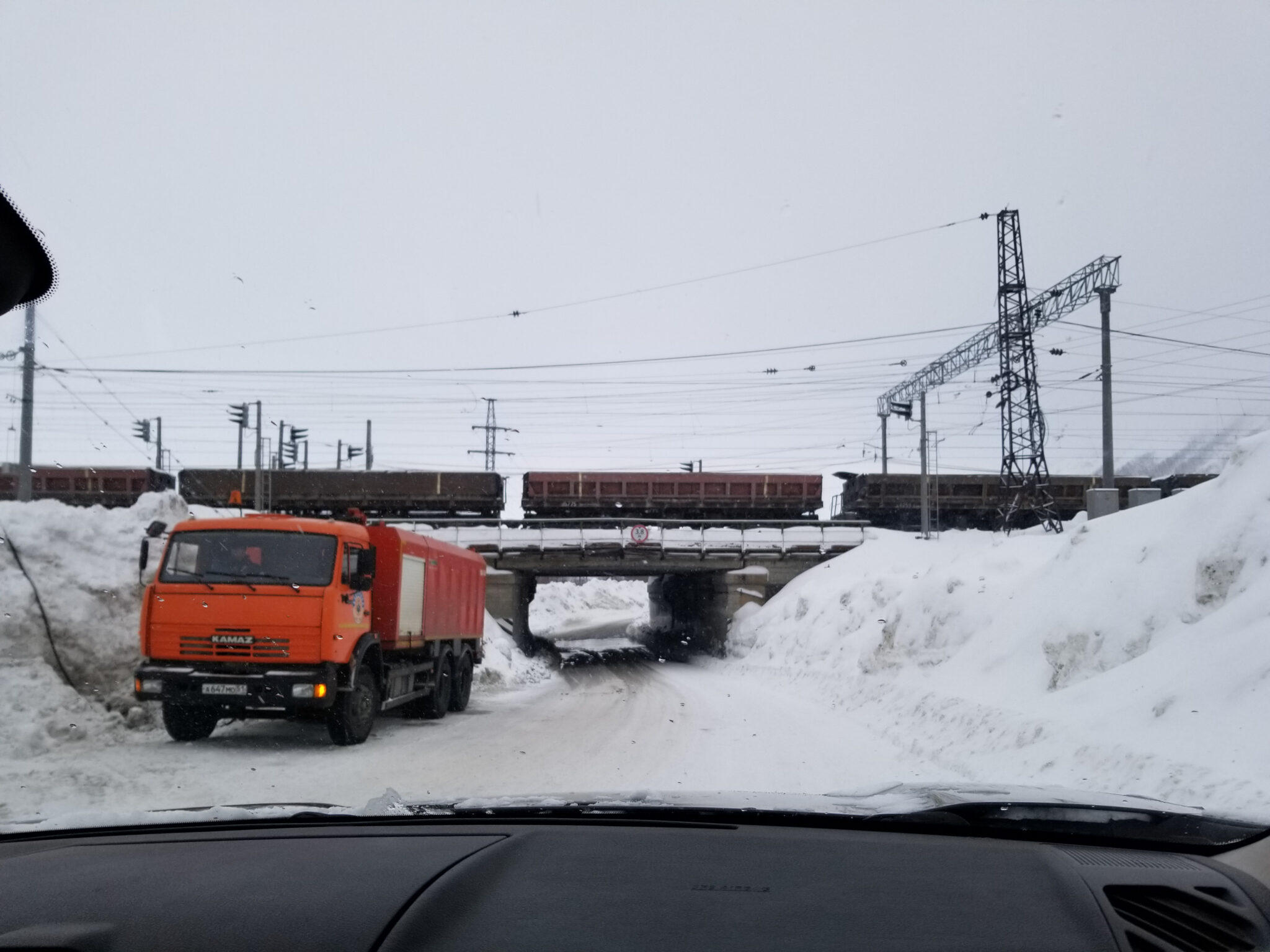 We got up early in the morning for the hour drive from Monchegorsk to Kirovsk so we could make it to 25 km ski center for first chair or should I say T bar. As one of two resorts in the Kirovsk area it is by far the superior resort when it is a powder day as I’ve never been to a resort that accesses great backcountry terrain easier. For powder days it is all about 25 km ski center but for groomer days Big Wood is a superior resort. With that being said there was powder so we were going to 25km ski resort.

When we arrived in the parking lot it was snowing heavily and white out conditions. While most people would not be excited we knew the terrain from previous trips and we had the terrain mostly to ourselves with constant reloading of the powder from wind.

The most challenging part of 25 km ski center is not the terrain but it is more the Tbars that drag you up 1,500 feet. Here Ben is getting off the first tbar before heading to the second one that is a slight traverse making it quite the painful experience.

Once on top of the Tbar within a 2 minute walk we went out to the sidecountry which offers wide open slopes with a small traverse at the bottom right back to the lifts.

With wide open slopes we could tell after our first turn that this was the day we were dreaming of. Stable fluffy powder from top to bottom with no wind transportation as we were in the middle of the storm.

Run after run someone would go first until they were barely visible then the next person would follow. Each run one of us would have to sacrifice with first tracks but knowing there were no cliffs we were able to spend hours doing lap after lap.

Each run we would just traverse a few more meters from our last lap and enjoy by far the best snow of our trip.

In the late afternoon the clouds started rising a little bit so we had better visibility on the lower storms.

The clouds never cleared throughout the day but it was a total blast sharing a gem of a ski hill with Ben even though he couldn’t see anything really all day.

With conditions so good the day before and the forecast calling for it to clear we decided to head back to 25 km ski center in Kirovsk so Ben could see what he was riding. We bought a 4 hour ticket with the goal to track out as much of the place as possible before going on an afternoon trip somewhere else.

While the day was a bit busier than the day before that means there were about 10 other crews but while most went for a warm up run we went straight for the great terrain.

For the first hour we stuck in the resort boundaries getting the easy access lines traversing a bit further every lap.

Soon we were back into the sidecountry we were tracking out the day before and we set down the first tracks in the backcountry.

As the day went on we just kept the same tactic of traversing a little bit further every lap and although it was definitely wind affected on the ridges as long as you stayed in the gullies you would find excellent snow.

The only problem was the firther you went out the further you would have to traverse to get back to the tbar. In the photo below we would ride to the flats in the sun then head to the right towards the shade line. It would take about 10 minutes but before long we were heading back up the hill.

25kms and the Kirovsk area is a unique area as it was a very important mining community during the days of the Soviet Union. It is still a huge mining area but as of the past few years they have been focusing more on tourism. When I say tourism most of the focus is on Moscow but it isn’t unheard of to have the random Finnish person. That being said people were blown away to hear there were 2 Americans that took the time to visit such a special place. After 4 hours we could have stuck around and easily found tracked out powder (as in 2 other tracks) but it was our last day of the trip so we wanted Ben to have the chance to do an afternoon run at Big Wood Ski Resort. 25 km ski resort definetly got Ben’s approval.

Below is a map of the place and while not big it is enough for at least a day of riding the front side before heading to the back side and touring in the upper left side of the picture.

The post Powder skiing at 25 km ski center appeared first on Where is Kyle Miller?.